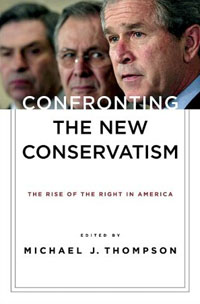 Michael Thompson, Assistant Professor of Political Science at William Paterson University, is the editor of the recently published Confronting the New Conservatism: The Rise of the Right in America (NYU Press).

What motivated you to edit a collection on “New Conservatism”?

The motivation was two-fold.  First, there was a real need to dissect American conservatism with a focus not only on political issues, but also on the domain of culture — of the ways in which everyday American life has become more conservative, more provincial, more likely to support conservative ideas in the political realm, and so on.  This is not the same as supporting radical conservative ideas, but there was no question that there was a presence of a general conservative ethos in America as contrasted with earlier periods in American history which were often marked by an antipathy toward economic inequality, to racial injustice, and toward forms of hierarchy and authority.  What I called here the “new conservatism” was an attempt to thematize this new atmosphere of political culture in America.

Second, there was the more immediate need to “confront” this conservatism by intervening directly into the central ideas and movements which support it.  I saw that this would need to be a collaborative enterprise, and this was the reason for the book being an edited collection of essays.  The idea of confronting this new conservatism therefore means that the essays are not only analytical, but they provide readers with arguments and analyses to themselves think and act more forcefully against conservatism as a political and cultural project.

We often hear about “neoconservatives” or conservatives more generally; so how is this different?  What is the “new conservatism”?

A central concern of the book was in fact to differentiate between different “brands” of American conservatism.  It is important to note that what this book calls “new conservatism” is a synthesis of different movements and ideologies, some of which can be contradictory at times.

Neoconservatism is a branch of the new conservatism, but is essentially defined by its origins as anti-communist during the Cold War.  Neoconservatives are more concerned with the protection of American power, and that means certain aspects of liberalism such as separation of Church and State as well as, sometimes, abortion rights.  But it also means a protection of capitalism and the liberal economic ideas about markets and economic policies that are against the welfare state or anything that smacks of socialism or social democracy (i.e. they embrace neoliberalism).  In many ways, neoconservatives are crucial to the new conservatism in the sense that they have provided a rationale for conservative ideas that was not there before.  They are a movement, and they were most effective in the arena of social policy rather than in the area of cultural values.  Attacking the welfare state, strengthening the military and American interests abroad, and so on — these are the crucial impulses that inform neoconservatism.  But they ought not to be confused with the religious right, with American populism, with xenophobia, etc.  These different strands of right wing culture and politics can find affinities with one another, but they are not always in agreement with each other.  Therein lies a set of possibilities for the Left.

Given Bush’s approval ratings, growing opposition to the war, and last year’s congressional elections; is this “new conservatism” just a fad that is starting to unravel or a brief setback for this political project?

This is an important question.  The Bush administration is an extreme manifestation of different conservative doctrines.  What the majority of Americans are reacting against is the overreach of foreign policy, not the anti-democratic effects it has had over the last seven years.  They are reacting against the blatant cronyism and corruption of the regime, but they see it as the result of Bush himself, of his incompetence.  Opposition to the war is more in line with dissatisfaction with the way the war has been handled rather than that it was waged at all.

I think that there is a central thesis around which the essays in the book coalesce, and that is that the “new conservatism” is not going away; that it is embedded in certain cultural dispositions in American life and culture; that conservatism is becoming more and more of a defining aspect of America’s public mind.  One of the things I argue in my essay is that this is partly produced by three interlocking themes in American politics and society: First, a return to individualism at the expense of public life; second, an overall acceptance of capitalism and its effects; and third, a “new provincialism” which stems from America’s suburbanization and its stultifying cultural effects.

It is not that the “new conservatism” is permanent, but rather, I think, that it needs to be understood in its complexity before it can be countered or confronted.

What’s your assessment of the current state of the Left, specifically the youth/student Left?

The Left is currently bereft of vision.  It is now primarily reactionary in character — reactionary, I mean, to the dominant policies and ideas of the Right.  This must change.  There needs to be a reassessment of what “Left” stands for; there needs to be a theoretical understanding of the constraints and limitations of political freedom and human development which plague American life, and this itself needs to be linked to an internationalist vision.

Next, this needs to inform a concrete program for political action.  All too often, the Left confuses theory with practice, confuses ethics with politics.  What needs to be done is to link the major concerns of most Americans and seek to tie them together through a critical method, a normative vision, and most importantly, a political program.  This is the only way to begin rethinking the ideas and priorities of the Left.

As for the youth/student Left: what is crucial, it seems to me, is to organize and radicalize on university and college campuses.  This is central for two immediate reasons.  The first reason is that the university is one of the last spheres of social life which is a free space for inquiry and critique separate — albeit not entirely — from the pressures of capital and the asymmetrical relations of power that exist outside of it.  It can never be immune to these things, of course, but it has the potential to be a space of leverage to encourage critical consciousness and call the existing institutions of society — from capital to cultural values — into question.

The next reason relates to the first: namely, that the university, this very space I was speaking about, is itself in danger of colonization from capital and the imperatives of the business community.  Liberal arts education is becoming subordinate to technical and business education; students are becoming less concerned with the communities that surround the university, and so on.  Creating the foundations for a secular associational life — through student groups, reading groups, groups that interact with the surrounding community, forming connections and links between different student groups and community groups, etc. — is the only way to begin to enliven movements elsewhere in society.  It is crucial that this become an active realm in political and social life for students.

In your opinion, how can progressive students be most effective in the upcoming 2008 election?

Doing what I already discussed: bringing issues to more prominence in their communities; volunteering for voter registration drives, being an election monitor; making sure that, in addition to national elections, people get involved with local elections.  Also, the other thing is to reach to communities, hold teach-ins, make education a public enterprise, and engage other citizens.  It is important to recognize that apathy among voters and citizens is more likely the result of bad organizing than it is of people watching too much television.

Could you elaborate more on this notion that political apathy is more likely the result of poor organizing than too much TV?

What I mean by this is that, from a political point of view, political organization are the active agents which stir involvement, activate citizens, and provide fields of knowledge and praxis within which broader political action can occur.  It is typical of many intellectuals and disgruntled activists to blame America’s political apathy on the stupefaction of popular culture — but something is not right about this.  Organizations need to become better at organizing, at linking the theories they learn in books and the seminar room with the real concerns of real people and help inform and shape political consciousness.  It is a broad project, but it can be done, and I think it begins with proper organizing at the university or student level and growing from there.

The journal you founded and edit — Logos: A Journal of Modern Society and Culture (at www.logosjournal.com)– seeks to foster a “rational radicalism.”  Could you briefly talk about this concept and how it applies to progressive students?

Rational radicalism means reviving a critical attitude toward all forms of ideology.  It means developing what Marx, in a famous letter to his father, referred to as the “ruthless critique of everything existing.”  Logos is primarily concerned with fostering a critical way of thinking about politics and culture; it is concerned also with reclaiming the traditions of politics associated with the Enlightenment.  Logos is concerned with informing a political-cultural project of renewal: renewal of ideas, of vision, of social, political, and cultural critique.  It is this which, it seems to me, is seriously lacking in American Left circles.  We have too much of either anti-intellectualism, associated with “activists” who act before they reflect, or hyper-intellectualism, associated with postmodernism.  In the end, both miss the essential element of politics: its public character.  We live in a society with democratic foundations.  We need to seek to use these to deepen democratic life.  Without this, we will be stuck in what Lenin rightly called the “infantile disorder” of leftism.  We need to look to the past, reclaim core democratic values, many of which spring from American politics and history itself.  This is the material the Left has to work with for theory and practice — there is no other way.

Mark Major teaches politics and media at Brooklyn College, CUNY.  He’ll be a PhD student in Political Science at Rutgers from Fall 2007.  This interview originally appeared on The Activist.