My drive to work every day usually includes a little zig and zag “shortcut” through the outer reaches of Bethlehem, New York, a suburb south of Albany.  I like this section of the route, because there is a working farm, there are open fields, a creek, and other pockets of the natural world hanging on precariously against the relentless forces of suburban development moving south on Route 9w, a main artery out of Albany.

It is not rare to see deer, rabbits, and a flock of wild turkeys on this stretch of road, lit up by the slanting gold of the morning sun.  Its a respite from the strip malls and shopping centers one must navigate for most of the drive to my workplace.

Now however, another development has appeared, right as this stretch of road begins, wiping out what had been an open pasture.

After the usual earthmoving prep work, overblown suburban frames seemed to literally mushroom up overnight, or in reality over my days off. 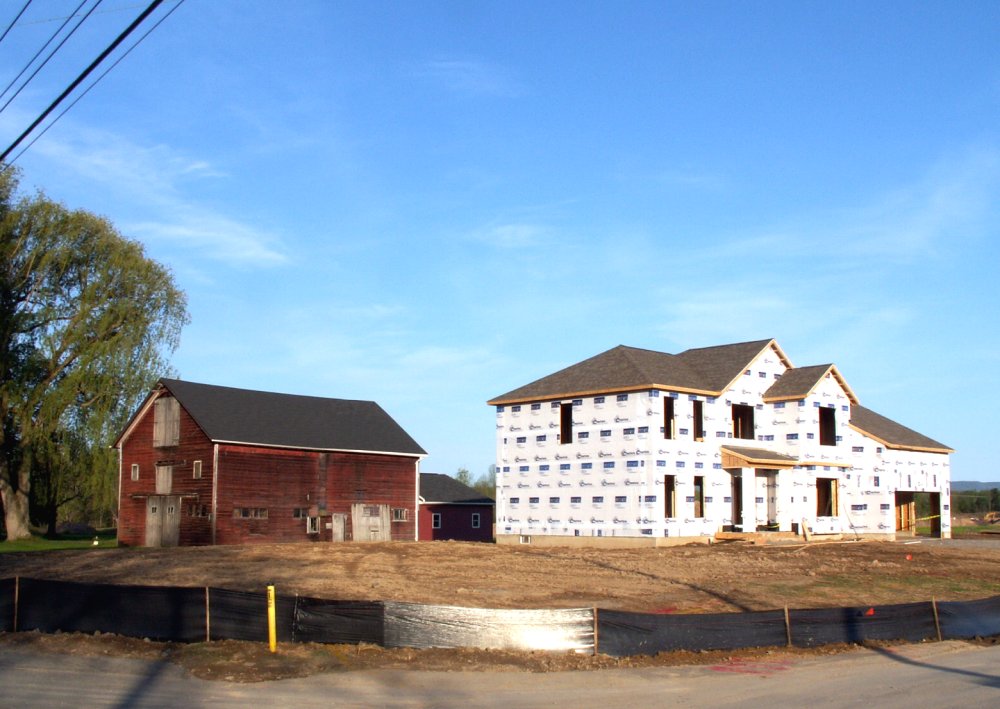 One of them sits right next to the barn in the photograph above.  I thought the juxtaposition was iconic of the sprawl that is eating up in New York, according to the Glens Falls Post-Star, 174 acres a day, much of it former farmland, like the pasture on my route.

The National Association of Homebuilders proudly reported in June 2006 that “The average floor area in a newly built home last year reached an all-time high of 2,434 square feet — up from an average 2,349 square feet in 2004 and just 1,645 square feet in 1975.  The Northeast had the largest average new-home size for any region last year, at 2,556 square feet.”

Given the size of these houses it is not surprising that according to a Brookings Institute/Cornell University study, “Sprawl without Growth: the Upstate Paradox,” cited in the Post-Star article, the amount of urbanized land in New York increased by 30 percent, while the population grew just 2.6 percent.

Is this growth sustainable, given pressures on water supplies, peaking oil and gas reserves, and the financial resources available to local and state governments?  It doesn’t seem likely.

And my flocks of wild turkeys, grazing deer, and racing rabbits won’t be seen on my way to work much longer either.