Offshoring U.S. jobs to the Far East has been a major campaign in the war of attrition against U.S. labor that began in the post-World War II era, was redoubled in the 1980s by the neo-conservative forces under the regime of President Ronald Reagan, and continues unabated to the present day.

The first wave of offshoring, which targeted blue-collar workers, devastated the working class in the U.S.  Chart 1 records the toll on domestic blue-collar jobs for the last decade alone: 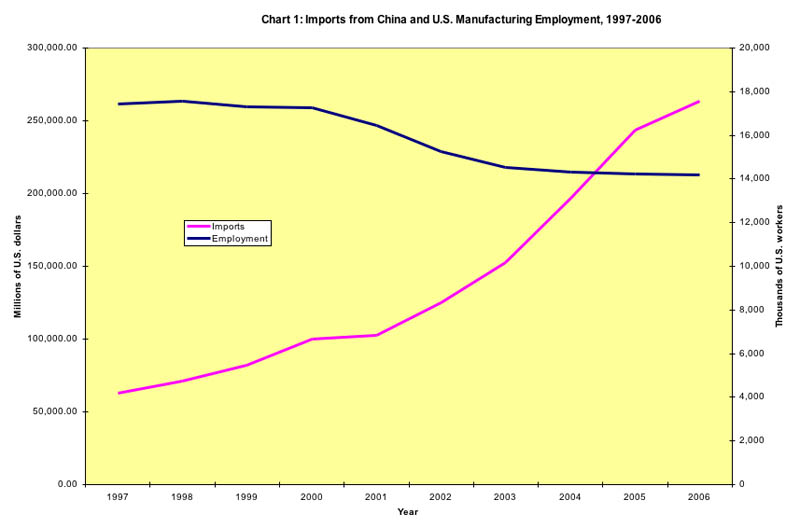 Chart 1 tracks the rising imports from China and losses in U.S. manufacturing jobs for the years 1997-2006.  The net loss for the period was over 18 percent, and this total does not include the jobs that were lost through offshore startups which are probably several times that figure.

Although the U.S. blue-collar job bleed appears to have slowed down in the past 3 years, it is more than offset by the second wave of outsourcing white-collar and professional jobs to the Far East that is building momentum so fast that no one can keep up with it.  As in the case of blue-collar jobs, all indications are that most new jobs are being created offshore.  It is already at the point where many major white-collar employers no longer bother recruiting domestically.

While the first wave of offshoring targeted blue-collar babyboomers, the second wave will undercut current workers and young people who have not yet entered the workforce.

It looks like U.S. labor has been trumped again.  In the past two-and-a-half decades, many U.S. hourly workers responded to the export of traditional blue-collar occupations by sacrificing to get their children through college and steering them toward supposedly safe service-sector jobs.  Today many of these children who are now in the workforce are watching their jobs follow those of their parents.

The significant difference this time is that nothing is being offered except long-term under- or unemployment that will be aggravated by the ongoing campaign of U.S. capitalism to recruit a cheap onshore industrial army through the widespread employment of undocumented migrant workers or the adoption of a so-called “guest worker” program that will legitimize the exploitation of migrants at the expense of all working people in the U.S.

Failure to fight back in this ongoing war of attrition is not a viable option.  For an in-depth discussion of this issue and what needs to be done, see “The Fight of Our Lives: The War of Attrition Against U.S. Labor” forthcoming in MRZine.org.

Richard D. Vogel is a political reporter who monitors the effects of globalization on working people and their communities.  He is the author of “The NAFTA Corridors: Offshoring U.S. Transportation Jobs to Mexico” and “Transient Servitude: The U.S. Guest Worker Program for Exploiting Mexican and Central American Workers.”  Contact irvogel@aim.com.