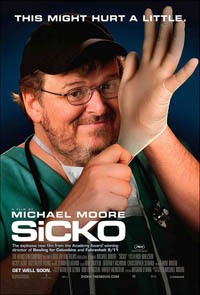 Michael Moore, who documented the sociopathology of the U.S. in Bowling for Columbine and nudged the Bush dynasty down the path of extinction in Fahrenheit 9/11, has outdone himself with Sicko.

In Sicko, Moore focuses on one of the most callous and shameful aspects of U.S. capitalism — market, or as a meticulous economist would say “effective demand,” health care where if you can’t pay you suffer or die.

Sicko is an interactive documentary.  The audience at the sneak preview that we attended applauded and groaned, squirmed and tensed, laughed and cried, involuntarily.  The urge to reach out and touch someone in the darkness of the theater was irresistible.

The narrative of Sicko is a tight web of memorable scenes.

Unforgettable are the panoramic shots of Moore’s miniscule flotilla in the open sea as it sets out on a quest to Guantanamo Bay seeking medical care for neglected 9/11 volunteers — a quixotic expedition which raises the question of who the real Pirates of the Caribbean are.

But, take caution here: it might be impossible to delete the grainy, halting images from a security video-cam that captured the dumping of an indigent hospital patient on skid-row in L.A. from your memory once you see it.

Sicko is The Jungle of our times.  Go see it — to miss Sicko is to miss out on the beginning of the movement to establish universal health care in the U.S.

Richard D. Vogel is a political reporter who monitors the effects of globalization on working people and their communities.  Other works include: “The NAFTA Corridors: Offshoring U.S. Transportation Jobs to Mexico” and “Transient Servitude: The U.S. Guest Worker Program for Exploiting Mexican and Central American Workers.”   Contact: irvogel@aim.com.