Edwin Starr’s antiwar blockbuster hit Number 1 less than a year after the Vietnam Moratorium brought millions of us into the streets in October 1969. 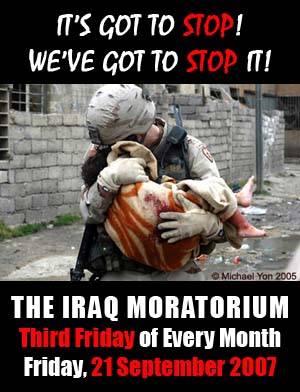 Nearly forty years later, we are again challenged to stop a racist colonial war.  And once again a Moratorium is being organized to provide a vehicle for protest.  The Iraq Moratorium will kick off Friday September 21 — go to iraqmoratorium.org for full information.

It’s apparent the fight for peace is a long haul.  So I’m planning to start Moratorium week 2007 with my own long haul — a Moratorium Marathon for Peace, Saturday, September 15.  I’ll be running those 26.2 miles as a fundraiser for the antiwar project I’ve worked on since just after 9/11, War Times/Tiempo de Guerras.  I’m writing to ask for your support, and to encourage you to find your own way to raise your voice for peace and justice at this urgent moment.

This will be my 23rd marathon and my first in the 60-64 year-old age group.  I’m not certain I can match my sub-4 hour time (3:54:47) in the Marathon for Peace I ran last fall.  This race (the Top of Utah Marathon) is at mile-high altitude, and the years are beginning to take their toll on my pace.  But I’d love to raise more money for peace than the $1,500-plus I did last year!  And the more support I have from you, the stronger my motivation will be to keep moving during those final tough miles.  You can help me along if you:

Also, if you aren’t already on the War Times/Tiempo de Guerras e-mail list (2-3 messages/articles/resource-announcements a month), you can sign on at www.war-times.org.  Below is a sample of the material you will receive.*

It is a privilege and source of hope to be connected to so many wonderful people in these difficult times.  “WAR’s” lyrics (written by Norman Whitfield and Barrett Strong) target what’s at stake better than I can:

“WAR! I despise,
’cause it means destruction of innocent lives,
War means tears to thousands of mother’s eyes,
When their sons gone to fight and lose their lives.”

In March 1965, before ordering the first deployment of U.S. ground troops to Vietnam (U.S. “advisers” had been there for years) President Lyndon Johnson told Secretary of Defense Robert McNamara: “I don’t think anything is gonna be as bad as losing, and I don’t see any way of winning.”

Johnson had just received a classified briefing saying that the U.S. client regime in South Vietnam was about to collapse.  Military experts informed the President that only a huge U.S. military commitment could avert defeat in the short run.  They said that looking ahead even “warfare of any design, scale or duration” could not assure lasting success. Maxwell Taylor, then the country’s most famous active-duty general and Ambassador to South Vietnam, warned against sending U.S troops, arguing that Vietnamese civilians would turn to patriotic resistance against the “white-faced soldier, armed, equipped and trained as he is” as a successor to the hated French colonialists.

A few days later Johnson commiserated about Vietnam with his old friend Richard Russell of Georgia, chair of the Senate Armed Services Committee.  “I guess we got no choice, but it scares the death out of me,” Johnson said.  “Those marines, they’ll be killing a whole lot of friendly Vietnamese,” Russell responded.

“Airplanes ain’t worth as damn, Dick,” Johnson continued.  Bombing only “lets you get your hopes up. . . .  A man can fight if he can see daylight down the road somewhere, but there ain’t no daylight in Vietnam.”

The heartbreaking truth is that officials at the top level of the U.S. government KNEW they could not win in Vietnam (and WHY they couldn’t win) even before the first bombing runs and deployments of U.S. ground troops.  And they were right. Ten years later the Vietnam War ended exactly the way it would have in 1965 if Washington had not massively intervened: U.S. troops fled the country under enemy fire, and Vietnam was reunified under the leadership of the communist revolutionaries who had been anchoring the fight for Vietnamese Independence for 50-plus years.

The cost between 1965 and 1975 was more than two million Vietnamese and 50,000 U.S. dead; uncounted wounded and innumerable lives ravaged on all sides, much of Vietnam poisoned by Agent Orange for two generations.

All this carnage because of U.S. leaders’ calculations about the damage to empire if Washington was forced out of Vietnam, as well as fear of being politically destroyed at home by the charge of “losing Vietnam.”  It took a decade, but in the end the combination of Vietnamese tenacity, international isolation and protest, and antiwar resistance at home forced the guardians of empire to confront the fact that they would pay a bigger political price for staying than leaving.  At a huge cost in lives and anguish, the U.S. was finally forced to withdraw.