I have now been back in New York for two weeks, immersed in teaching at Columbia University and reunited with the women and families at the Bronx birthing center, as well as my own family.  I have had time to reflect on my work and need to share with you an experience before I left South Africa that has put my work into perspective.

I have pondered my month’s work in rural Eastern Cape, both in terms of teaching nurse mentors on HIV care and then being in the field and witnessing two of them going back to their clinics and initiating the opening of a clinic to serve women in their first week postpartum, to intervene in infections that are taking new mothers’ lives who are HIV infected and not receiving adequate early follow-up to prevent morbidity and mortality.  And I participated in curriculum development to train midwives in rural areas of  KwaZulu Natal to become proficient providers to women and  babies with HIV.  It is all very direct work with enormous challenges: the lack of adequate training strategies for nurses to be major providers for women; the use of South African national guidelines for HIV treatment that are now over three years old and need updating; the difficulty of moving systems in a more rapid manner to save mothers and babies who are in urgent need of treatment.  So again and again the question arises as to why the government’s ministry of health has been such an obstacle to tackling with full force this HIV epidemic.  I always say to nurses, who ask me frequently if I think they (their families, their communities, their society) are going to survive this disease that continues to claim more and more lives, that they had the ability to mobilize to defeat apartheid and that they have the ability to harness the AIDS struggle.  And on August 29, I was able to witness the soul of this struggle to combat AIDS at a demonstration in Capetown to protest the dismissal of the new-appointed minister of health, Nozizwe Madlala-Routledge.

President Mbeki has held a public stance that fostered the denial of the existence of the HIV virus, and his Minister of Health, Manto Tshabalala-Msimang, has tightly controlled and limited the ability of the Department of Health to mobilize the health care system against this epidemic.  Promoting nutritional supplements as beneficial to AIDS treatment and labeling antiretroviral medications as “poisons,” Manto is angrily called “Beetroot” (a vegetable she believes is curative) at funerals as elders bury their children who are dying at alarming rates from AIDS.  The Treatment Action Campaign (TAC), launched under the leadership of Zachie Achmat in December 1998, has been at the center of mobilizing a national campaign, through protests, court actions, and a community-based treatment literacy campaign to educate everyone about AIDS.  It has been largely the efforts of TAC that have forced the government to initiate treatments to prevent mother-to-child transmission of HIV and then the national roll-out of antiretroviral medications.  Their members have been persecuted, jailed, and died, yet they remain relentless and dedicated.

In the fall of 2006, Manto became seriously ill, and the Deputy Minister Madlala-Routledge, a long-time activist and fighter for appropriate AIDS national policy, began her uphill struggle to reroute the AIDS strategy in South Africa.  Achmat called her recognition of TAC a “defining moment” for South African AIDS policy.  There has been a sense that the tide could indeed be turned with an aggressive national protocol for prevention and access to treatment.  This tragically was short-lived, as Madlala-Routledge was fired from her position the end of July this year, and Manto is back in full swing.  TAC, now allied with COSATU (Congress of South African Trade Unions, long associated with progressive work on the HIV/AIDS pandemic throughout the region), called for a demonstration to demand the reinstatement of Madlala-Routledge.  And I had the privilege of being one of thousands to add my body and voice at this protest.

Have you ever put on a tee shirt that says “I Am HIV-Positive”?  I suggest you try it sometime and get on a subway or bus and see what happens.  This would give you a picture of what it feels like to be public and to recognize firsthand that AIDS does not discriminate.  So to be in a large church in Capetown, overflowing with people of all ages, genders, and races, wearing HIV positive tee shirts and full of energy and belief in the ability to move past this crisis in South Africa, gives a larger picture as to what this struggle is about.  A nurse from Khayelitsha, a township in Capetown, and a member of the National Health and Allied Workers Union (NHAWU), Sister Mpumi Mantangana spoke, whose clinic initiated antiretroviral treatment for pregnant women in 1999 in defiance of government policy; labor union leaders, and of course, Achmat — all demanded the urgency of reinstating Madlala-Routledge and a progressive AIDS policy.  I looked around, at mothers and babies seated in my row, at young and elder faces, and I cried and I sang and I raised my fist, one in the midst of many.

I sat in the presence of many unknown heroes, too many who have already died (2,219,804 as of August 15, 2007), some who are dying now, and others who will die from lack of access to AIDS treatment.  I also sat there feeling that my small pieces of work seemed to fit into a much larger, powerful marking of history, a history of resistance, that has triumphed before in South Africa, and is being built again.  We on our side need to express our solidarity there and here. 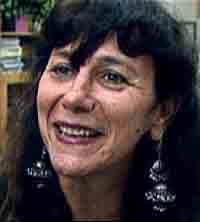 Jennifer Dohrn, CNM, is Director of Midwifery Services at the Childbearing Center of Morris Heights, the Bronx, New York, the first birthing center in the United States to serve inner-city women of diverse backgrounds.  Jennifer also directs the midwifery education program at Columbia University School of Nursing.  She has been working in South Africa to expand health care in pregnancy, birthing and postpartum in the context of an AIDS health care crisis of epidemic proportions.  Photos by Faizel Slamang.