The ultracons have it all wrong and the neocons are glad that they do.

The straw dog that the ultracons are beating to death in print and on the Internet is the chimerical North American Union, purported to be a supranational state that intends to override the sovereignty of the United States and subject all the citizens of the empire to the interests of Canada and/or Mexico.

Alas, the fate of straw dogs is always the same; they are cursed and beaten and then unceremoniously discarded after they have served their purpose.

No matter — they were never alive in the first place.

The issue that the non-existent international union is diverting attention away from is the continuing globalization of North America and the havoc that it is wreaking on working-class communities and the environment of the continent — a campaign that is being guided by the invisible but heavy hand of big North American capital through the tri-lateral Security and Prosperity Partnership (SPP) utilizing the offices of the Presidents of the U.S. and Mexico and the Prime Minister of Canada.

This secretive successor to the now infamous NAFTA has met three times at significant (if not symbolic) locations: the SPP debuted at Bush’s Texas ranch in 2005; met a second time in the Mexican resort town of Cancun in 2006; and held a third summit last month in Montebello, Canada, near Ottawa.

A map of the continent helps orient a discussion of SPP efforts to support the globalization of North America. 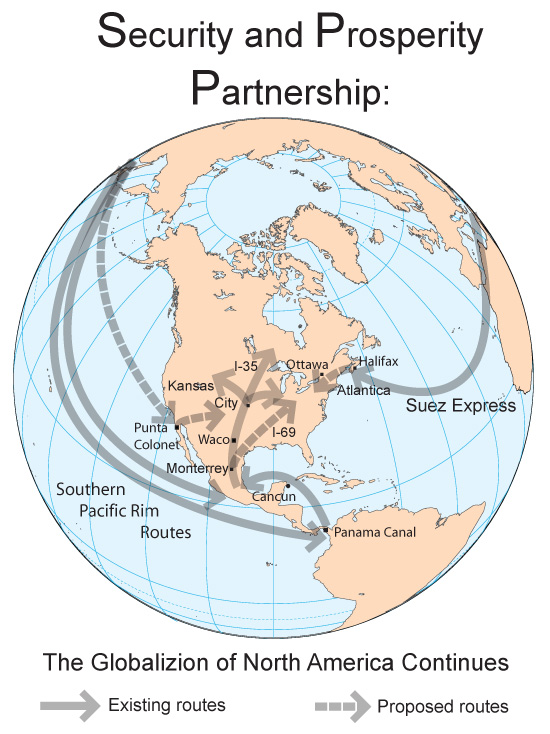 The stability of capitalism in North America depends on the continuous and unrestricted importation of cheap manufactured goods from the Far Eastern Pacific Rim.  A current initiative of North American capital, championed by the SPP, is to divert as much commodity traffic as possible from the unionized ports of the U.S. and Canada to the South in order to exploit cheap transportation labor in that region.  Because of the sheer mass of commodities flowing through global supply chains, every reduction in labor costs, no matter how minute, yields huge profits.

The existing supply chains through the hemispheric South originate at the Eastern Pacific Rim, traverse the Pacific Ocean, and either: 1) land on the west coast of Mexico and head north through Mexico and the Southwestern U.S. via truck and rail to destinations in the heartland of the U.S.; or 2) pass through the Panama Canal, land on Mexico’s east coast and follow the same routes north.  A formal mandate of the SPP is to facilitate this flow of commodities.

The SPP summits have followed the freight.  The launch of the SPP was staged at President Bush’s ranch less than 25 miles west of Waco on the mid-continent I-35 NAFTA corridor which carries 70 percent of the freight from Mexico, and the Cancun summit was held within sight of the container ship traffic from the Panama Canal that passes through the Yucatan Channel.  The significance of the location of the meeting at Montebello will be discussed below.

The SPP bestowed its blessings on the plan for a new container ship port at Punta Colonet in Baja California capable of handling the largest vessels.  The plan has been put on hold with the start of the project to widen the Panama Canal, but the deal might not be dead.  Punta Colonet would establish a new southern route that could divert container freight from ports in the North, especially Los Angeles/Longbeach, and send it through the fragile landscape of the Sonoran Desert in order to exploit cheaper Mexican transport labor.  The environmental impact of Punta Colonet, should the plan move forward, will irreversibly damage the air, land, and sea of the region.

The Atlantica project, which is presently under development, is an SPP endorsed scheme to establish a free trade zone through the Atlantic Provinces of Canada and the U.S. states of Maine, Vermont, New Hampshire, and New York.  The primary goal of Atlantica is to reroute Far Eastern container freight bound for the Upper Midwest and Canada away from unionized ports.  This flow of container traffic, referred to as the Suez Express, also originates in the Far East but is routed through the Indian Ocean, passes through the Suez Canal and the Mediterranean Sea, and crosses the Atlantic Ocean.  The private toll road planned for Atlantica will run all the way to Buffalo, N.Y.  Like the Punta Colonet project, the Atlantica highway will divide and devastate another of the few unspoiled areas on the continent.

The Montebello meeting of the SPP occurred on the northern boundary of Atlantica and corresponded with the finalization of plans for the area.

The fact that all three nations have now been graced by summits at strategic locations does not signal the existence of a North American Union as the ultracons suppose.  Instead, this series of closed meetings under tight security is a strong indicator of the progress of the ongoing globalization of North America under the SPP.

In the face of growing dissatisfaction and disillusionment with NAFTA, CAFTA, FTAA, and free trade in general and mounting demands for congressional opposition, the sectors of North American capitalism that are pushing globalization have resorted to covert operations under the mantle of national and regional security and have set loose a whole pack of straw dogs on the citizens of the continent.  All of them, including the mythical North American Union, are nothing more than distractions from the central contradiction of the day — globalization.

In the current phase of class struggle in North America, SPP would be more accurately translated as Securing Profits and Power, at the expense, of course, of working people and the environment.

Richard D. Vogel is a political reporter who monitors the effects of globalization on working people and their communities.  Other works include: “The NAFTA Corridors: Offshoring U.S. Transportation Jobs to Mexico”; “Transient Servitude: The U.S. Guest Worker Program for Exploiting Mexican and Central American Workers”; and “The Fight of Our Lives: The War of Attrition against U.S. Labor.”  Contact: <irvogel@aim.com>.