The recent UAW ratification of the Chrysler contract that contains many of the same provisions that were adopted in the labor agreement signed with GM last month is another major blow to the jobs and welfare of US autoworkers.  Globalization, the Big Three’s grand strategy of pitting the workers of North America against one another in order to assure handsome profits, has won another handy victory (see “Globalization Now: The North American Auto Industry Goes South”).

The current round of “pattern bargaining”, where subsequent labor contracts follow the precedent set by the initial deal struck between the first of the Big Three and the UAW, simultaneously affects the past, present, and future of all workers and retirees covered by the new labor agreements.

Connecting the Past, Present and Future

Because labor contracts include provisions that are active, retroactive, and proactive, they connect the past, present and future in multiple ways.

The “health care trust” (VEBA) covers both the past and the present.  This stipulation of the current agreements transfers the health care liability for both current and retired autoworkers to a UAW administered health care trust at a substantial discount for the Big Three who initially incurred the liability.  This provision is not merely a concession but one of the biggest givebacks in US labor history.  During negotiations the press has systematically ignored the fact that it applies to benefits that have already been earned by workers.  Though the value that was lost through this scheme can be estimated in dollars, the ultimate cost of this giveback, in terms of the quality of life for autoworkers and their families, remains to be seen.

A second connection between the present and the future under the new agreements that will affect all current and future employees will occur on the shop floor.

At first blush, instituting lower wages for new-hires appears to be a future provision of ratified contracts, but past experience in other industries has shown that the acceptance of a tiered-wage system eventually drags all workers down.  Nothing tempts companies to enhance their bottom line more than replacing grandfathered workers with cheaper new-hires.  The result is that although a tiered-wage system specifically targets new-hires, it impacts current employees as well.

Although the health care trust and tiered wages are critical issues, it is a future possibility that is dominating the current round of bargaining far more than the past or present — the question of whether there will be any auto work at all in the Midwest in the future is the hottest issue on, and off, the table.

The Not-So-Invisible Hand of Globalization

Guarantees of future work in the Midwest, or lack thereof, represent the not-so-invisible hand of globalization in current negotiations.  In the GM deal there were some tentative offers by the company to invest in new plants and upgrades in the Midwest that were not matched in the Chrysler offer.  In spite of this critical discrepancy, the Chrysler pact was ratified.

In an official statement, Chrysler’s co-president, Thomas W. LaSorda, said the company was “pleased that our UAW employees recognize that the new agreement meets the needs of the company and its employees by providing a framework to improve our long-time manufacturing competitiveness.”  Clearly, Chrysler realizes that the UAW employees at Chrysler have been cowed by the threat of offshoring even more jobs to the South and are reconciled to competing with offshore workers. 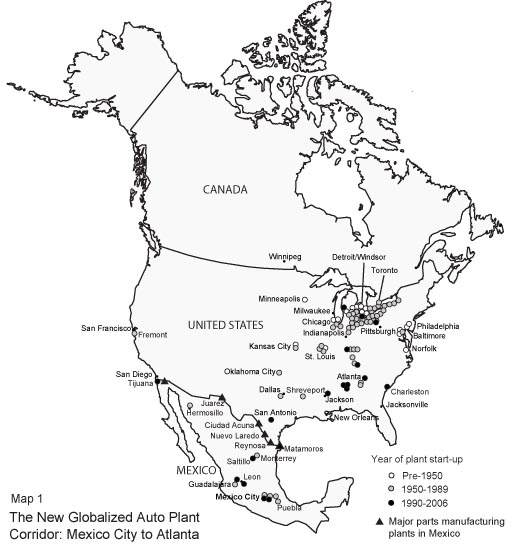 In the upcoming Ford negotiations, management is going to call on workers for bigger givebacks than those conceded to GM and Chrysler under the same thinly veiled threat of globalization.

The ongoing round of bargaining in the auto industry clearly indicates the weakened position of the UAW in the globalized labor market.  The history of the decline of North American autoworkers and their communities illustrates clearly that globalization is slash-and-burn capitalism that ultimately leaves ruin in its wake.  Until it is confronted as such, the givebacks will continue until there is nothing left to give.

Richard D. Vogel is a political reporter who monitors the effects of globalization on working people and their communities.  Other works include: “The NAFTA Corridors: Offshoring U.S. Transportation Jobs to Mexico”; “Transient Servitude: The U.S. Guest Worker Program for Exploiting Mexican and Central American Workers”; and “The Fight of Our Lives: The War of Attrition against U.S. Labor.”   Contact: irvogel@aim.com.