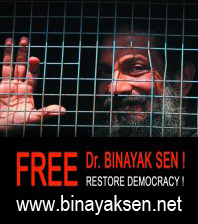 I am a woman in my eighties.  When we were young, people were inspired by the examples of karmayogis who were patriotic, motivated by ideals of service, wise and virtuous.  We considered ourselves blessed if we could follow in their footsteps.

I had so far been a silent spectator to the injustice and violence that pervades our free democracy today, but only because I was personally untouched by it.  But now, as an aged mother, and outraged by the blows of injustice, I wish to break my silence. Inconsolable in my pain at the age of eighty-one years, I now wish to make a humble appeal to the people of free, democratic India.

As perhaps many of you are aware, my son Dr. Binayak Sen is today held in jail, a victim of extreme injustice.  At the age of four years, he was troubled by questions of injustice: why didn’t the boy who helped us at home not eat with us?  Why did he have to eat alone on the kitchen floor?  Why couldn’t he join him at meal times?

When he graduated with his first medical degree with distinction at the age of twenty two from the Christian Medical College in Vellore, he refused to heed his father’s wish for him to go to England to study for the MRCP.  Whatever knowledge he needed to practice medicine in his own country, he insisted, he could acquire right here.  He was subsequently awarded the M.D. in paediatrics from Vellore, and then joined JNU as an assistant professor with a wish to study for a PhD in Public Health.  But he could brook no further delay.  He left his academic position to take up a position at the TB Research Centre and hospital run by the Friends’ Rural Centre at Hoshangabad (MP).  After a couple of years there, he found an opportunity to work among the miners in Chhattisgarh.  There he joined the late independent trade unionist Shankar Guha Neogi and devoted himself selflessly to serving the daily wage labourers of the Bhilai factories and the mineworkers and their families at the mines of Dalli Rajhara and Nandini, aiding and organizing the poor and the oppressed untiringly in their daily struggles to rid themselves of their many social ills.  It was here, while working with Shankar Guha Neogi’s Chhattisgarh Mines Shramik Sangh, that Dr. Sen set up a health centre run for and by the workers of the area. Within a few years this grew to a 25 bed hospital.  Dr. Sen then left this hospital in the care of the workers and a few other doctors who had been inspired by his example to work there, and joined his wife Dr. Ilina Sen in Raipur in starting a NGO called Rupantar.  This organization worked in the areas of community health, ecologically sustainable agriculture, helping women become independent, and formal and informal education for children and adults.  Work proceeded apace in all areas successfully. When a rice research centre had opened at Bhatagaon, a scientist cited Dr. Sen in one of his works as “Dr. Binayak Sen, a farmer”.  Dr. Sen also opened community health centres in the villages of Dhamtari and Bastar districts, devoted to treating patients and training health workers for administering primary health care and raising awareness of their own communities in matters of health.  Primary and adult education centres were opened at various villages.

Dr. Sen’s example inspired several other doctors from famous medical institutions like AIIMS to give up lucrative careers and comfortable lifestyles to open similar health centres in Bilaspur.  These centres are now running very successfully.

While working with Rupantar at Raipur, Dr. Sen joined the People’s Union of Civil Liberties as an all-India Vice President and Secretary for the state of Chhattisgarh.  In the course of his medical work among the poor and the oppressed, which was already occupying all his time, he became aware of the abuses of the state towards the poor adivasis of Bastar district, and protested against the state sponsored Salwa Judum movement that pitted adivasis against one other.  The state did not take kindly towards his protestations on behalf of the poor.

When the brother of an aged and ailing prisoner of Raipur Central Jail asked Dr. Sen to visit and treat his brother in prison, Dr. Sen did so with the permission of the jail authorities.  The fact that the prisoner was a Naxalite gave the state an opportunity to arrest and imprison Dr. Sen on May 14, 2007 under the state’s Public Security laws.  The patriot who had devoted his entire professional life to the untiring service of the poor — a record acknowledged by the Paul Harrison Award bestowed on him by his alma mater — that very person was now in jail charged with being a terrorist waging war against the state.

When the Chhattisgarh High Court denied Dr. Sen his appeal for bail, his wife Dr. Ilina Sen appealed to the Supreme Court.  The date for the hearing of the bail petition was fixed for Monday, December 10 2007.

A Bench consisting of a senior and a junior judge was appointed to hear the appeal for bail.  The initial junior judge was subsequently replaced by another.  On December 8, the Chhattisgarh government invited the senior member of this Bench to Raipur as the chief guest at the inaugural ceremony of a Legal Aid Centre, and extended its hospitality to him till December 9 when the senior judge returned to New Delhi.  The very next day, the Bench dismissed Dr. Binayak Sen’s appeal for bail in just thirty-five minutes.

Here, without casting any doubts or aspersions on anyone’s integrity, I humbly wish to pose my question to all the people and revered leaders of free, democratic India: SHOULD I REGARD AS JUSTICE the refusal of bail to one who even as a child was moved by injustice, who having devoted his entire working life selflessly to providing food and health to the poor, who without coveting wealth survived for days on dal, rice and green chillies, who is accustomed to living like the poor, who dedicated his life to serving the people of his country, and who is now arraigned for breach of public security and waging war against the state?

If this is justice, where I should I seek redress against injustice?  Should I remain a victim of injustice even at this age?

Does this son of mine — a selfless, wise, virtuous, humble, peace-loving karmayogi, motivated entirely by the ideals of service, and living among the poor — have to spend his days in prison?

My simple question to all compassionate readers of this appeal is: How much longer to that day when Dr. Binayak Sen will receive justice?

I ask this question not just for myself and for my son, but also on behalf of all mothers suffering from the injustice meted out to their children.  Is justice so elusive in our free, democratic country?

The appeal was published by Sanhati, and excerpts from it have appeared in the Business Standard.