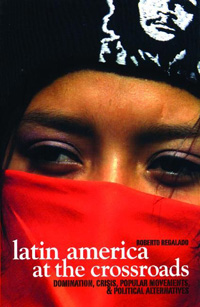 This compact book by Roberto Regalado, a veteran member of the Central Committee of the Communist Party of Cuba, strongly reaffirms the need for revolution in Latin America and beyond.

Regalado, a section chief in the Cuban CP’s Department of International Relations, is anything but dogmatic.  He is attentive to recent new trends in Latin American economics and politics and respectful toward the diverse currents of socialist opinion.  He stresses the importance of the new features of Latin American social struggles: the role of peasants, the landless, indigenous peoples, women, environmentalists, and others.

But his careful and unpretentious analysis leads toward a striking conclusion: only a revolutionary seizure of political power by the masses can open the road to social progress south of the Rio Bravo and even within the imperialist countries.

In just 232 pages Regalado provides a handbook of Marxist politics, outlining Marxism’s basic anticapitalist premise and examining closely the evolution of revolutionary and reformist schools of thought through the twentieth century.

The dominant trend shaping the present situation, he argues, is the advent of “neoliberalism” — a concerted capitalist offensive aimed at sweeping away the gains made by working people during the last century and at deepening the subjugation of Third World countries.

Neoliberalism has entailed greater government intervention to increase capitalist profits, which, as Regalado points out, is a symptom of the system’s crisis.  Yet ironically, its advent led social democratic parties in imperialist countries to reaffirm that there is no alternative to accepting capitalist rule.

At their best, Regalado says, these parties aimed to rally support for neoliberalism’s harsh measures in return for their more gradual implementation.  “After having wagered everything on the welfare state,” he adds, “the bankruptcy of that ideological construction today places . . . [social democracy] in the public pillory.” Unwilling to consider a perspective of superseding capitalism, its only course is total surrender.

Regalado argues that an anticapitalist strategy is urgent not only in the most oppressed nations but also in the richest and most privileged.  Echoing a theme often voiced by Hugo Chávez and Fidel Castro, he sums up his case:

Collapse of the Soviet Bloc

In Regalado’s view, the conditions governing working people’s response to neoliberalism were greatly worsened by the collapse of the Soviet Union and allied Eastern European regimes during 1989-91, which led to a “strengthening of imperialist power, interference, and intervention on a world scale, and the erosion of the credibility of the ideas of revolution and socialism.”

Without attempting a full analysis, Regalado notes two factors that led to the collapse:

To this forceful analysis should be added the fact that the Stalinist elite pursued power not merely for its own sake but to protect massive economic privileges, frequently placing its narrow interests above those of world socialism.

Regalado notes that “socialist states” in Eastern Europe and Asia and also in Cuba followed “the general criteria of organization and the political and economic functioning of the Soviet Union, without questioning at the time” the so-called “Soviet model.”

This is clearly significant with regard to Cuba’s future path.  Stalinist distortions in Cuba have received much discussion on the island.  Yet with regard to the Cuban experience, Regalado is too modest.  It is important to note the ways in which Cuba is fundamentally different from the other post-capitalist states that Regalado refers to.

Despite a couple of attempts, no privileged bureaucracy conquered Cuba’s Communist Party and government.  Cuba’s internationalist perspective, as this book itself testifies, remained firmly oriented to the needs of worldwide liberation.  And the Cuban masses have never been repressed and excluded from the exercise of power in the way that they were in the Soviet Union and under other Stalinist regimes.

The second and longer part of Latin America at the Crossroads takes a close look at the region’s evolution during the last few decades.  It briefly outlines the history and character of Latin American society since the conquest and provides an effective survey of major events of recent decades.

Regalado’s long involvement with the region’s politics enables him to provide striking portraits of significant turning points.  Notable is his description of the fall of the FSLN government in Nicaragua in 1990.  Sandinista errors and weakening Soviet support played a role, he says, but the decisive factor was the implacable U.S. war against the regime.

This forced the Sandinistas into a compromise peace that obliged them to “continue taking steps that weakened the foundations of revolutionary power.”  In this context, the 1990 vote lost by the FSLN was a rigged election in which “it faced a certain defeat, although this was not foreseen by the Sandinista leadership.”

Regalado also notes the “violations of sovereignty, independence, and self-determination” represented by the forced removal of Haitian president Jean-Bertrand Aristide in 2004 by U.S. — and, we must add, Canadian — troops and the subsequent fraud, perpetrated with Canada/U.S. support, in an unsuccessful attempt to deny victory to René Préval in the 2006 presidential elections.  He criticizes the Latin American governments that are participating in the Haiti occupation for complicity in these crimes.

Following the victory of the Cuban revolution, Regalado states, Latin America witnessed a wave of mass anti-capitalist struggles that placed imperialist rule in question in several countries.  During the 1970s and 1980s, however, imperialism was largely successful, through direct intervention and through sponsoring brutal dictatorships, in quelling this wave of struggle.

“Once the ‘pacification’ of Latin America was accomplished and the subordination of the bourgeoisies of the subcontinent reaffirmed, the phase of institutionalizing the new system of continental domination by U.S. imperialism began,” he writes.

The three pillars of this new model, he explains, were affirmation of the forms of representative democracy, establishment of “free trade,” and an increase in direct U.S. military presence and control across the region.  Foreign debt was utilized as the initial tool to break resistance by Latin American governments; they were then herded into hemispheric covenants which provided steadily increasing scope for U.S.-sponsored intervention in national politics.

As the U.S.-sponsored coup in 1990 against Haiti’s democratically elected president showed, the new order’s respect for “democracy” applies only to governments that play by Washington’s rules.  Moreover, national elections are swayed by arrogant interventions by U.S. government agencies.

Traditionally, capitalist rule and exploitation in Latin America rested on a “system of social and political alliances,” which continued even during periods of dictatorship, Regalado says.  During the decades since 1970, however, a “transnational concentration of wealth and political power has been imposed on the region.”

This evolution has “destroyed not only the social and political alliances” on which class rule had previously been based, but destroyed also “the economic and social matrix that would have permitted [this rule] to be restabilized,” Regalado says.  This helps explain “why political, economic, and social crisis exploded everywhere in Latin America in the transition from the 20th to the 21st centuries.”

Toward Conquest of Political Power

Despite major gains by popular movements, however, Regalado emphasizes that imperialist domination is still firmly entrenched in Latin America.  Even where powerful popular upsurges have taken place, left parties lose far more elections than they win.  Victory has come, he states, where the left has accumulated political capital over time and built unified, rooted movements.  And even so, left victories in Brazil and Uruguay were insufficient to “endanger the institutional equilibrium.”

“Only in the elections of Chávez and Evo Morales was there a direct link between the weakness of the institutional political system, the rise in the social movements, and a popular political force taking office, in circumstances in which it was possible to break, at least in part, with the restrictions imposed by the model of domination.”

(Regalado’s book went to press too early for him to analyze recent victories of popular forces in Ecuador and Nicaragua.)

Regalado concludes with a ringing reaffirmation of the need for revolution:

“History shows that the reform of capitalism in progressive fashion is viable only in those places and at those moments when it was compatible with the process of capital accumulation.  This compatibility does not exist today, either in Latin America or in any other region of the world. . . .

“Sooner or later, the popular content and capitalist ‘packaging’ of the political processes developed by the Latin American left today will lead to an untenable contradiction, because only a revolutionary social transformation, however it may be accomplished in the 21st century, will resolve the problems of Latin America.”

“A political system . . . based on mechanisms of popular participation and representation capable of establishing a consensus that guarantees unity of thought and action on the key points of socialist construction and of mutually reinforcing this unity through the free and constructive flow of all ideas and proposals that reflect the diverse interests of the sectors of society for whose benefit such an effort is being undertaken.”

And this, Regalado specifies, requires nothing less than “the seizure of political power” under conditions where “those holding power in the world will cling to it to the very end.”

The Spanish edition of Latin America at the Crossroads, updated from the English version, is being widely read and studied across Latin America.  The book thus typifies the way in which Cuba’s example and ideas have served to introduce socialism to a new generation of fighters across the region.  This is in itself an excellent reason for socialists and social activists in English-speaking countries to study it closely.