Once again, speculation about a dollar crash abounds.  The hegemonic roles of the US currency and economy have repeatedly been called into question since the 1970s.  Skeptics saw each major economic downturn and depreciation of the dollar as the beginning of the end of US hegemony.  In defiance of the often predicted decline, the US is still No. 1 within the capitalist world system, and the US-led cartel of imperialist world domination is still intact.  That is why we have to ask whether the current weakness of the dollar and the US-triggered economic crisis are just another cyclical phenomena that will essentially reproduce US hegemony or indications of major power shifts among capitalist states and social classes.

Paul Krugman issued the catchword for the debate on the future of the dollar and the US economy, the “Wile E. Coyote Moment,” comparing the dollar to Wile E. Coyote who has run off a cliff, standing on thin air.  According to this analogy, the mortgage crisis is the last cliff for the dollar before its final plunge.  Whether Krugman’s grim prediction will come true remains to be seen.

To answer this question, we have to look at the dollar, the current account, and economic trends over the last three decades.  Then, two things stand out.  First, the dollar has gone through two phases of significant appreciation since the 1970s, peaking in 1985 and 2001.  Second, only during the first of these two phases dollar rates and current account deficits moved, as market logic predicts, in opposite directions.  Since the economic downturn of 1991, the deficit has increased constantly, showing almost no connection to dollar rates or the business cycle.  If the foreign deficit depended on exchange rate developments, it would have been reined in by dollar depreciations since 2001.  That did not happen. 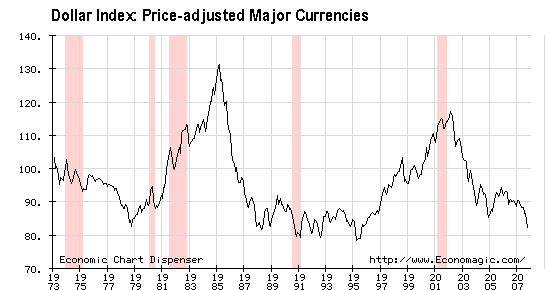 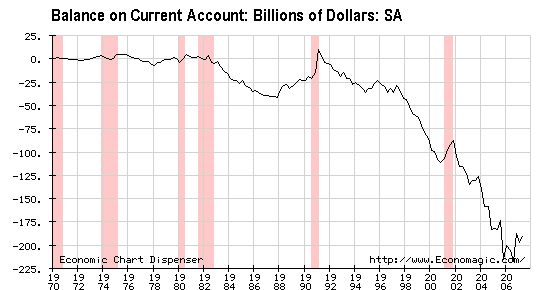 Keynesian economists dispute the relation between exchange rates and foreign trade that figures so prominently in neoclassical economics.  According to their view, trade flows, which are statistically recorded in the current account balance, depend on the purchasing power of companies and households.  The 2001 crisis was followed by a recovery based on credit expansion and massive inflows of foreign capital.  These two factors generated additional purchasing power, parts of which were happily spent on imported goods, causing ever higher current account deficits.  In the Keynesian story, capital markets are in the driver’s seat, generating and allocating the finances that can later be used to buy goods and services.  Plausible as this explanation may be, it is not totally convincing, because capital inflows imply higher dollar demand and, therefore, should have eventually triggered currency appreciations.  That didn’t happen either.

Since neither the logic of goods markets nor that of capital markets can explain the development of dollar rates and US foreign deficits convincingly, some economists, the most prominent among them Yale professor Robert Shiller, have drawn the conclusion that economic agents’ irrational behavior, such as herd behavior of financial investors, must be the reason for “market-adverse” developments of currencies and current accounts.  This view is shared by Krugman, who fears that badly informed investors have taken the nominal dollar rate at its face value, i.e. as proper representation of the value produced in the US economy, for too long but will be forced to give up their imagined wealth once the dollar crashes.

New Keynesian economists like Krugman and Shiller view excessive greed and lack of information as the causes of irrational exuberance, to use Shiller’s terminology, which, in turn, triggers economic crises.  Accordingly, crises could be avoided if investments were calculated objectively, based on complete information, instead of, to use Keynes’ term, animal spirits.  The recognition of ignorance in economic decision-making, Keynes’ point of departure from (neo)classical economics, is missing from the New Keynesian view.  The New Keynesian search for proper governance structures to complete incomplete information also disregards the fact that the right to private property entails the power of property holders to withhold information from the public and that of top managers to provide sugarcoated information to shareholders.  Equally neglected is the fact that capitalist competition not only is a breeding ground for the greed for profit but makes investment driven by such greed a precondition for survival, no matter that it causes over-accumulation and crises at the same time.  Thus, Keynes’ “animal spirits” had better be called “capitalist spirits.”

Following Marx, we can see that individual capitalists are behaving more or less rationally within an irrational system.  However, their socially uncoordinated behavior produces crises that look like the result of individual misbehavior in the eyes of capitalists and economists alike.  The highest form of misbehavior, of course, is political intervention because it completely runs counter to the market logic.  Thus, apologists of capitalism like Milton Friedman see political intervention as misguided shackles on the market’s invisible hand.  However, if we see both individual capitalists’ appetite for profit and political intervention as indispensable parts of the capitalist mode of production, it is possible to explain the de-linking of dollar rates, current account deficits, and business cycles without swinging wildly between theoretical assumptions of complete information and the practical retreat from reason into irrational instincts.

The First Recurrence of a Strong Dollar: the Second Cold War and Industrial Restructuring

The disintegration of the Bretton Woods system of fixed exchange rates, economic crises, and an upswing of anti-imperialist and workers struggles in the 1970s challenged the capitalist world order, which largely had been shaped by the US in the aftermath of World War Two.  The US bourgeoisie, after recovering from the shock of not being invincible, reacted to these challenges with a declaration of war against the Soviet Union, anti-imperialist movements, and the American working class.  This war against the world’s subordinated classes aimed at the expansion of world markets and a shift of income distribution from wages to profits.  Propertied classes from all capitalist countries honored the strategic farsightedness and boldness with which the American bourgeoisie carried out the program for profit expansion through massive investments in the US.  These capital inflows led to a rising dollar, indicating the trust that capitalists of all countries deposited in restored US hegemony.

Each increase in the dollar value from 1979 to 1985 pushed organized labor in the US further onto the defensive. Imported goods that became more competitive as a result of the rising dollar limited sales opportunities for domestic industries.  US bosses eagerly used more competitive markets as a pretext to attack the incomes and working conditions of their workers.

The anti-socialist rollback (in this regard it should be remembered that American union bureaucrats and Soviet apparatchiks are nothing but varieties of the same socialist breed in the world view of US conservatives) soon started to bear fruits.  Soviet interim leader Andropov already suggested, albeit vaguely, concession vis-à-vis the US-led West that would materialize under Gorbatchew.  The AFL-CIO under Lane Kirkland, much more bound to class collaboration than the Soviet leaders, was at a loss in the face of the capitalist offensive right from its beginning.  Under these circumstances, pushed by the US government, the American, German, and Japanese central banks heavily intervened in currency markets in 1985.  Through this, the dollar was turned around, and competitive pressures were loosened, giving some relief to US industries.  Increasing masses of surplus value that had been squeezed out of American workers thus could be realized through increasing market sales.

The Second Recurrence of a Strong Dollar: the New World Order and New Economy

The weak dollar from 1985 to 1995 was abandoned in the same way it was initiated, through coordinated central bank intervention.  While industrial capital in the US enjoyed increasing sales and profits in the slipstream of the declining dollar, Wall Street became concerned about the future of the US as the world’s financial center.  In the early 1990s, the US, having just gone through recession, was manufacturing a new world order after the disintegration of the Soviet empire, so big money could persuade the government and central banks that the weak dollar was incompatible with the reputation of the last superpower.  Steered by the emerging Wall Street-Treasury Complex, to use the term of liberal economist Jagdish Bhagwati, world capitalism entered a phase of multilaterally negotiated market expansion, computer-based reorganization of global supply chains, and financial explosion.

Profits were up for grabs again and the dollar was rising again, too — until the New Economy bubble burst in 2001.  After that, the military-industrial complex increasingly replaced Wall Street’s threadbare capital fetish.  Not the invisible hand of the markets but the iron fist of the US army was now declared the guarantor of profit.  However, the US army’s inability to end the insurrections in Iraq and Afghanistan has closed the circle between the crisis of US hegemony in the 1970s and the present day.  Back then, the American Way of Life, having reached its limits of productivity and profit growth, also lost much of its appeal.  Notably, the Vietnam debacle made the US seem a paper tiger ready to be overthrown, and the civil rights movement and labor unrest led the power elite to fear the loss of their control.  Since that time, the US dollar hegemony has been restored twice, first in the name of a Second Cold War and after that under the slogans of the New World Order and New Economy.  The continuation of this fragile hegemony currently depends on the absence of serious challengers, be they imperialist rivals or anti-capitalist movements. Until such challengers materialize, US hegemony, as well as the dollar, will remain suspended in mid-air.

Ingo Schmidt teaches economics at the University of Northern British Colombia in Prince George.  He also works as a labor educator.