The United States incarcerates more people than any country in the world, including the far more populous nation of China.  At the start of the new year, the American penal system held more than 2.3 million adults.  China was second, with 1.5 million people behind bars, and Russia was a distant third with 890,000 inmates, according to the latest available figures.  Beyond the sheer number of inmates, America also is the global leader in the rate at which it incarcerates its citizenry, outpacing nations like South Africa and Iran.  In Germany, 93 people are in prison for every 100,000 adults and children.  In the U.S, the rate is roughly eight times that, or 750 per 100,000.

To produce a fresh portrait of incarceration levels at the start of 2008, Pew conducted a survey of inmate counts from the states and the federal government.  Our finding: the U.S. prison population rose by more than 25,000 inmates in 2007 — a 1.6 percent rate of growth that brought the national prison census to 1,596,127.  Although the 2007 expansion didn’t match the 3.1 percent hike during 2006, the growth tracks projections and continues a pattern of steady expansion that has characterized the U.S. penal system for more than 30 years. 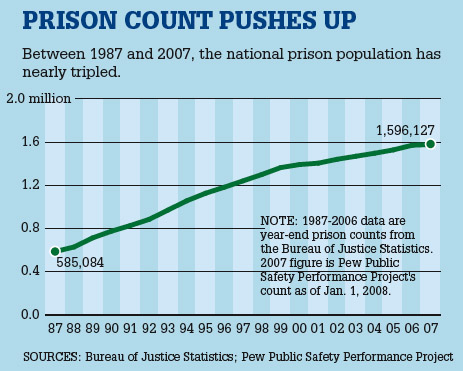 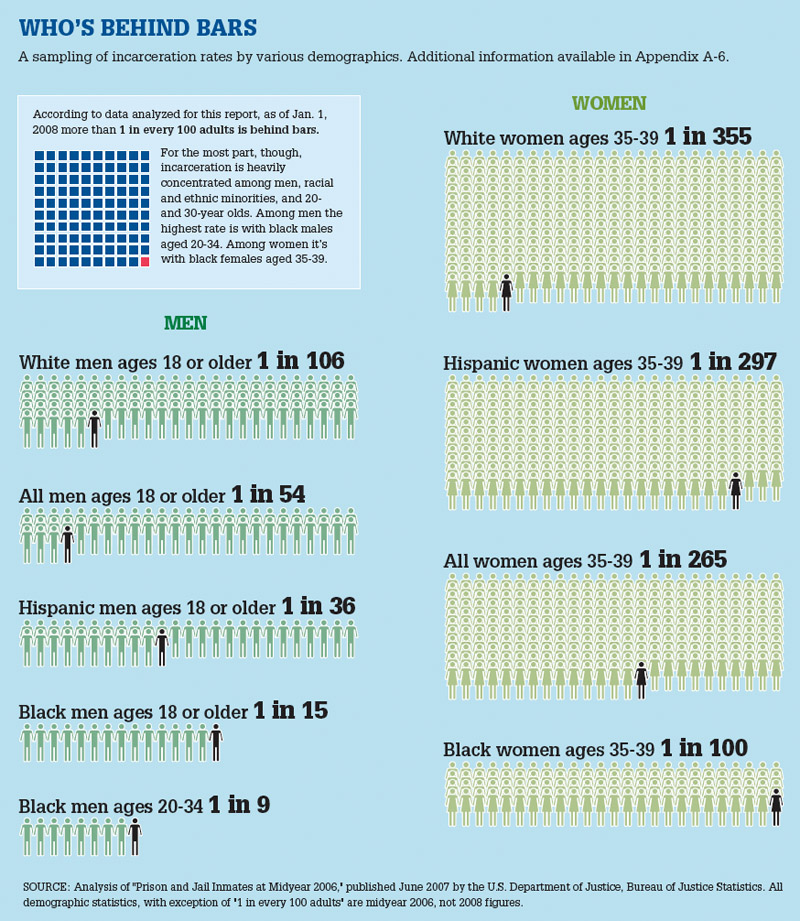 That statistic masks far higher incarceration rates by race, age and gender.  A separate analysis of midyear 2006 data from the U.S. Department of Justice shows that for Hispanic and black men, for instance, imprisonment is a far more prevalent reality than it is for white men.  The young, meanwhile, are disproportionately more likely to wind up in prison than their elders.  While one in every 15 black males aged 18 or older is in prison or jail, for black men over 55, the rate is one in 115.

The Costs — High and Climbing Fast

Prisons and jails are “24-7” operations. They require large, highly trained staffs.  Their inhabitants are troubled, aging and generally sicker than people outside prison walls.  Even absent continued growth, the cost of keeping the nation’s lock-ups running safely is staggering.  Total state spending on corrections — including bonds and federal contributions — topped $49 billion last year, up from $12 billion in 1987.  By 2011, continued prison growth is expected to cost states an additional $25 billion. 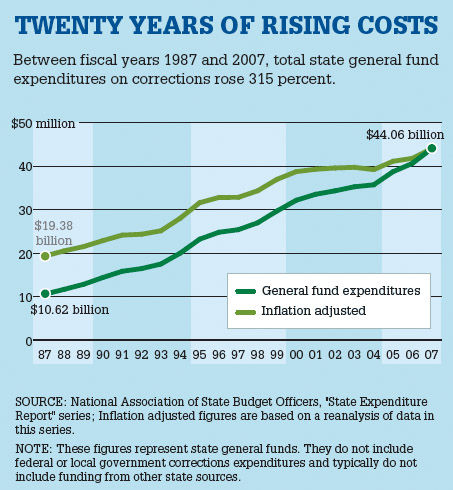 Crowding Out Other Priorities

Year by year, corrections budgets are consuming an ever larger chunk of state general funds, leaving less and less in the pot for other needs.  Collectively, correctional agencies now consume 6.8 percent of state general funds, 2007 data show.  That means one in every 15 dollars in the states’ main pool of discretionary money goes to corrections.  Considering all types of funds, corrections had the second fastest rate of growth in FY 2006.  With a 9.2 percent jump, it trailed transportation but outpaced increases in spending on education and Medicaid.

In 1987, states collectively spent $33 billion of their general funds on higher education.  By 2007, they were spending $72.88 billion, an increase of 121 percent.  Adjusted to 2007 dollars, the increase was 21 percent.  Over the same timeframe, inflation-adjusted corrections spending rose 127 percent, from $10.6 billion ($19.4 billion in 2007 dollars) to more than $44 billion.  Some regional differences were more dramatic.  While inflation-adjusted prison spending rose 61 percent in the Northeast in the last 20 years, higher education spending went the other way, dropping by 5.5 percent. In the West, meanwhile, the number of dollars allocated to prisons skyrocketed by 205 percent.  At the same time, higher education spending rose just 28 percent. 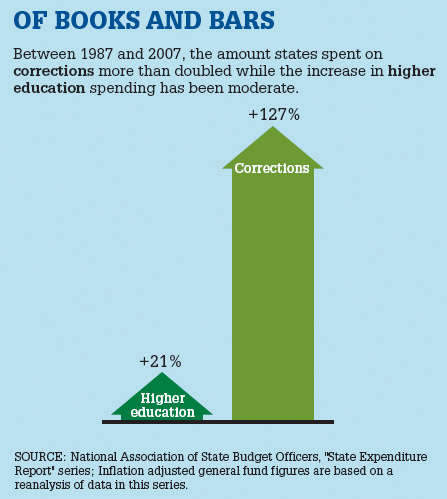 This article is an excerpt from the Pew Center on the States, “One in 100: Behind Bars in America 2008,” 28 February 2008, pp. 5-7, 11-12, 14-15.  Click here to download the full report.  For international comparison, consult International Centre for Prison Studies, King’s College London, “World Prison Brief,” <kcl.ac.uk/depsta/law/research/icps/worldbrief/wpb_stats.php>.