Israel’s Declaration of Independence states that the Jewish people arose in the Land of Israel and was exiled from its homeland.  Every Israeli schoolchild is taught that this happened during the period of Roman rule, in 70 CE. 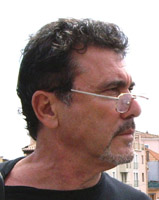 The nation remained loyal to its land, to which it began to return after two millennia of exile.  Wrong, says the historian Shlomo Zand, in one of the most fascinating and challenging books published here in a long time.  There never was a Jewish people, only a Jewish religion, and the exile also never happened — hence there was no return.  Zand rejects most of the stories of national-identity formation in the Bible, including the exodus from Egypt and, most satisfactorily, the horrors of the conquest under Joshua.  It’s all fiction and myth that served as an excuse for the establishment of the State of Israel, he asserts.

According to Zand, the Romans did not generally exile whole nations, and most of the Jews were permitted to remain in the country.  The number of those exiled was at most tens of thousands.  When the country was conquered by the Arabs, many of the Jews converted to Islam and were assimilated among the conquerors.  It follows that the progenitors of the Palestinian Arabs were Jews.  Zand did not invent this thesis; 30 years before the Declaration of Independence, it was espoused by David Ben-Gurion, Yitzhak Ben-Zvi and others.

If the majority of the Jews were not exiled, how is it that so many of them reached almost every country on earth?  Zand says they emigrated of their own volition or, if they were among those exiled to Babylon, remained there because they chose to.  Contrary to conventional belief, the Jewish religion tried to induce members of other faiths to become Jews, which explains how there came to be millions of Jews in the world.  As the Book of Esther, for example, notes, “And many of the people of the land became Jews; for the fear of the Jews fell upon them.”

Zand quotes from many existing studies, some of which were written in Israel but shunted out of the central discourse.  He also describes at length the Jewish kingdom of Himyar in the southern Arabian Peninsula and the Jewish Berbers in North Africa.  The community of Jews in Spain sprang from Arabs who became Jews and arrived with the forces that captured Spain from the Christians, and from European-born individuals who had also become Jews.

The first Jews of Ashkenaz (Germany) did not come from the Land of Israel and did not reach Eastern Europe from Germany, but became Jews in the Khazar Kingdom in the Caucasus.  Zand explains the origins of Yiddish culture: it was not a Jewish import from Germany, but the result of the connection between the offspring of the Kuzari and Germans who traveled to the East, some of them as merchants.

We find, then, that the members of a variety of peoples and races, blond and black, brown and yellow, became Jews in large numbers.  According to Zand, the Zionist need to devise for them a shared ethnicity and historical continuity produced a long series of inventions and fictions, along with an invocation of racist theses.  Some were concocted in the minds of those who conceived the Zionist movement, while others were offered as the findings of genetic studies conducted in Israel.

Prof. Zand teaches at Tel Aviv University.  His book, “When and How Was the Jewish People Invented?” (published by Resling in Hebrew), is intended to promote the idea that Israel should be a “state of all its citizens” — Jews, Arabs and others — in contrast to its declared identity as a “Jewish and democratic” state.  Personal stories, a prolonged theoretical discussion and abundant sarcastic quips do not help the book, but its historical chapters are well-written and cite numerous facts and insights that many Israelis will be astonished to read for the first time.

Tom Segev, an Israeli historian, is the author of 1967: Israel, the War and the Year That Transformed the Middle East among numerous other publications.  This book review appeared in Ha’aretz on 1 March 2008, and it is reproduced here for educational purposes.