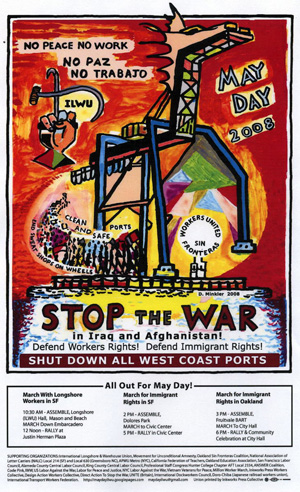 (SAN FRANCISCO, CA) More than 25,000 longshore workers at 29 west coast ports are exercising their First Amendment rights today by taking a day off work and calling for an end to the war in Iraq.

“Longshore workers are standing-down on the job and standing up for America,” said ILWU International President Bob McEllrath.  “We’re supporting the troops and telling politicians in Washington that it’s time to end the war in Iraq.”

McEllrath says rank-and-file members made their own democratic decision in early February when Longshore Caucus delegates voted to take action on May 1.  Employers were notified of the plan, but refused to accommodate the union’s request despite plenty of advance notice.  The employer group, represented by the Pacific Maritime Association (PMA) consists of large carriers and port operators, most of which are foreign-owned.

“Big foreign corporations that control global shipping aren’t loyal or accountable to any country,” said McEllrath.  “For them it’s all about making money.  But longshore workers are different.  We’re loyal to America, and we won’t stand by while our country, our troops, and our economy are destroyed by a war that’s bankrupting us to the tune of 3 trillion dollars.  It’s time to stand up, and we’re doing our part today.”