Senator McCain recently proposed opening up environmentally sensitive offshore zones to oil drilling in response to the recent jump in oil and gas prices.  He argues that increased offshore production will reduce dependence on foreign oil, in addition to lowering gas prices.

However, the Energy Information Agency (EIA) projects that Senator McCain’s proposal would have no impact in the near-term since it will be close to a decade before the first oil can be extracted from the currently protected offshore areas.  The EIA projects that production will reach 200,000 barrels a day (0.2 percent of projected world production) at peak production in close to twenty years.  It describes this amount as too small to have any significant effect on oil prices.1

These standards were virtually unchanged over the next 22 years.  In 2007, the standard for cars was still 27.5 MPG.  The standard for light trucks had been raised to 22.2 MPG, but almost all of the increase was in the last 3 years.  It is possible to imagine a counterfactual in which the country continued to increase Corporate Average Fuel Economy (CAFE) standards after 1985.

If, instead of holding them constant, the government had increased mileage standards after 1985 at the rate of 0.4 MPG per year for both cars and light trucks (a much slower pace of increase than in the period from 1980 to 1985), then the standard for cars in 2007 would have been 36.8 MPG and the standard for light trucks would have been 28.3 MPG.  The average for the current fleet of cars on the road would be over 32 miles per gallon.2

If fuel efficiency had improved at this rate, then the average car on the road would be more than 50 percent more fuel efficient than is currently the case (32 miles per gallon compared with 20.2 miles per gallon).  If increased efficiency did not change the number of miles driven each year, then this would imply a reduction of more than one-third in the amount of oil used for the country gasoline needs.  This savings would be equal to approximately 3,300,000 barrels per day.3 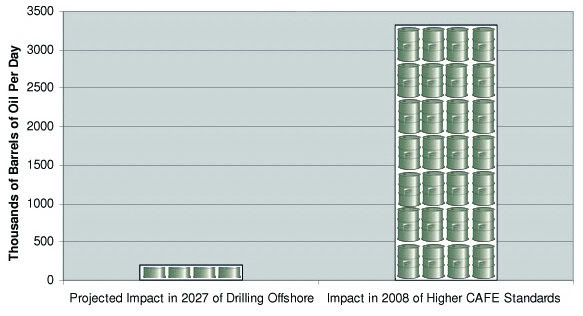 Figure 1 compares the projected increase in oil production for 2027 with the 2027 baseline scenario, if the country opens up protected offshore areas for drilling as Senator McCain has proposed.  It also shows the reduction in oil consumption that we would have seen in 2008 had the country continued to increase mileage standards at the rate of 0.4 miles per year in the 22 years following 1985.

In conclusion, if Congress had continued to increase fuel efficiency standards over the last 22 years, we would currently have more than sixteen times the savings in oil consumption than what Senator McCain’s plan promises to accomplish in 20 years by drilling offshore in protected areas — and a proportionately larger impact on gas prices.

1  The projections for oil output from the protected areas can be found in: United States.  Department of Energy, Energy Information Agency.  Annual Energy Outlook with Projections to 2030.  Washington: GPO, 2007.

2  This calculation is based on a number of simplifying assumptions.  It assumes that ten percent of the cars of a model year are pull off the road each year or driven less frequently.  So a 2006 car would be on average driven 90 percent as much as a 2007 car and 81 percent as much as a 2008 car (0.9*0.9).  It assumes that cars are pulled off the road altogether after 20 years.  The calculation also assumes that an equal number of cars and trucks are sold each year and that the number of cars sold each year has been constant over the last twenty years.  The data on fuel efficiency standards can be found in: United States.  Department of Transportation, National Highway Traffic Safety Administration, 1980-2007.  Summary of Fuel Economy Performance.  Washington, GPO: 2005.  Accessed online on March 3, 2008.

3  This calculation assumes the daily use of oil for refining gasoline is equal to approximately 9 million barrels.  See: United States. Department of Energy, Energy Information Agency.  Weekly Inputs Utilization, and Production.  Washington: GPO, 2008.  The projected savings are equal to the difference between the current rate of consumption and the consumption that would occur if the auto fleet was 58.4 percent more fuel efficient.

Dean Baker is Co-Director and Nichole Szembrot is a Domestic Intern at the Center for Economic and Policy Research in Washington, DC.  This report was first published by the CEPR in June 2008.