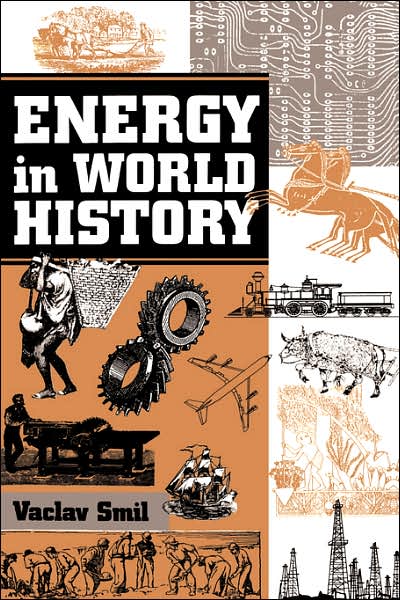 Vaclav Smil’s Energy in World History (1994) provides an overview of global changes in human energy use from before the Neolithic Revolution to modern times.  In various places in the book, Smil discusses the relationship between energy use and the rise of centers of economic and political power in world history.  In explaining what caused the emergence of these great powers, though, Smil argues that it was either their exploitation of energy sources disproportionately available to them or the development of other factors internal to them (e.g., specific cultural values and unique technical innovations).  In other words, Smil avoids discussion of the interaction between the rise of imperialism and energy use.  In his book, the roles of international exploitation and oppression, carried out by nations like England and the United States, which have consumed and continue to consume vast quantities of energy, are not considered important factors in the changing relationship between human society and energy.  By drawing from various other works (e.g., Bagchi 2005; Cronon 2003; Davis 2002), this paper will attempt to correct for Smil’s failure to incorporate a critical international component into his argument.

Some may think that his analysis does not suffer from a Eurocentric bias since Smil clearly appreciates, for example, the many energy developments carried out in China throughout history.  He writes, for example, “If there is an ancient society to be singled out for its notable advances in fuel use and prime mover development, it must be Han China (207 B.C. – A.D. 220).  Han dynasty innovations were adopted elsewhere only centuries, or even more than a millennium, after their invention” (232).  As Smil elsewhere reveals, Europe was typically on the receiving end of Chinese and other non-European innovations (66).  Nevertheless, in his account, technological development in China has largely been driven by internal forces.  He writes, “There was clearly a synergistic relationship between China’s impressive large-scale projects and the rise, perfection, and perpetuation of the country’s hierarchical bureaucracies” (61).  His focus on China’s “hierarchical bureaucracies” is a prelude to later criticism about the negative aspects of “the concentration of decision-making power” (213) with respect to energy efficiency.  According to Smil, energy use is highly inefficient when governments, like China and Soviet Russia, are based on “rigid central planning” (250).  In contrast, the later superiority of British and American technological development, in his view, stemmed from equally internal but more individualistic factors, such as “ingenious practical innovators” (234), “a pioneering spirit and the interest in striving for lower operating costs and gaining prestige” (67).  In short, the internal forces responsible for European and American energy innovations are described in positive terms whereas Chinese and Soviet forces are cast in a negative light.  This belies his seemingly non-Eurocentric approach.

Smil recognizes the relative superiority of Chinese innovation in energy use even at the dawn of European modernity, but he is vague on exactly when and how that began to change.  He writes, “But until the seventeenth century, European farming was generally inferior to Chinese accomplishments, and Europe was always belatedly adopting innovations coming from the East” (emphasis added, 66).  Yet, only a few pages later he states, “European peasant farming could not assure a secure food supply right up to the end of the eighteenth century” (emphasis added, 69).  Reading it, one might be led to believe that, by the end of the eighteenth century, Chinese farming, despite its previous superiority, had (somehow) sunk to the level even below that of European farming which itself still “could not assure a secure food supply.”  Many historians have shown, however, that Chinese agriculture was, in fact, still superior to European food production in the eighteenth century, and even up until the nineteenth century, when Europe took command of the world economy by force (Bagchi 2005; Davis 2002).

Amiya Kumar Bagchi (2005) writes, “that until the very end of the eighteenth century Europeans were unable to compete with India and China in most areas of agriculture or craft production” (30).  Moreover, “China and India were the two most important suppliers of manufactures to the rest of the world before the growth of machine-based manufactures in Britain” (135).  The material conditions (e.g., life expectancy and literacy) of people living in China also tended to be better than those of their European counterparts in the eighteenth century (Bagchi 2005, 138).  Crucially, from Mike Davis (2002), we learn that “North China, in particular, was unprecedentedly prosperous by historical standards. . . .  As a result, epidemic disease, unlike in Europe, was held in check for most of the ‘Golden Age'” (284).  This clarification is important because, as discussed below in the conclusion, the dissimilar qualities of life in different parts of the world in the eighteenth century serve as a benchmark upon which the success of the European world system, firmly established in the nineteenth century, can be evaluated.

As previously mentioned, the ability of Europe to surpass China’s accomplishments is not explained in world-historic terms by Smil, i.e., international economic and political relations are not taken into consideration in Energy in World History.  This is a striking omission because it was largely the imperial thrust of European nations that not only made rapid development of Europe possible but also destabilized many non-European nations.  In fact, this imperialism reversed the progress made in human development in many countries, like China and India, thereby helping to lay the foundations for the creation of the Third World.

The only international factor that really interests Smil appears to be technological diffusion.  For example, he argues, “The transfer of European techniques to North America, and the unprecedented rate of innovation during the nineteenth century, created the world’s most efficient traditional farming system” (57).  In this case, American agricultural innovation is seen largely as the result of its European birthright.  The sweeping human and ecological changes brought about through the decline of Indian populations in America and the European “treatment of land and property as commodities traded at market” (Cronon 2003: 75) goes out of sight, out of mind in a narrative of technological diffusion.

There is one moment in Smil’s book that hints the relationship between imperial forces and energy use:

The gunned ship, developed in Western Europe during the fourteenth and fifteenth centuries, launched an era of unprecedented long-distance expansion.  In Carlo Cipolla’s (1966) apt characterization, the ship “was essentially a compact device that allowed a relatively small crew to master unparalleled masses of inanimate energy for movement and destruction.  The secret of the sudden and rapid European ascendancy was all there.” (emphasis added, 137-8).

It did not take very long for Western technical superiority to transform European societies and extend their reach to other continents.  By 1700 typical levels of energy use, and hence of material affluence, were still broadly similar in China and Western Europe.  Then the Western advances gathered speed.  (234).

He makes the same argument for the United States, writing, “More than in any other modern nation, the United States has acquired its power and influence largely through its extraordinarily high use of energy” (237).  But, how did it come to use energy in this way?  There is no mention of American international relations, which in many ways resembled its European forbears (e.g., the acquisition of guano by the United States — see Foster and Clark, 2004).

Smil’s account in Energy in World History misses an important force that resulted in a significant divergence in energy use between the (still mostly) European and non-European countries of the world.  This divergence rested on exploitation and oppression and ultimately severely degraded the quality of life of people living in places like China and India.  For instance, parts of China in the eighteenth century had instituted “ever-normal granaries,” which provided a relatively secure supply of food to the Chinese even in times of scarcity (Davis 2002).  In fact, this security decreased their vulnerability to a major drought in 1743 as a result of the El Niño Southern Oscillation (Davis 2002).  China enjoyed a relatively high level of material prosperity at this point in world history.  Davis writes:

Indeed, while the Qing were honoring their social contract with the peasantry, contemporary Europeans were dying in the millions from famine and hunger-related diseases following arctic winters and summer droughts in 1740-43.  “The mortality peak of the early 1740s,” emphasizes an authority, “is an outstanding fact of European demographic history.”  In Europe’s Age of Reason, in other words, the “starving masses” were French, Irish and Calabrian, not Chinese” (281).

Nevertheless, by the nineteenth century, China could no longer provide its people with material security.  As Bagchi (2005) argues, “armed capitalism” originating from the West destabilized the group of countries, including China, that would later become the Third World.  Davis (2002) reveals how this transfer of power and wealth from them to Europe in turn made them more vulnerable to “natural” disasters, incapacitating social organizations that were once able to counteract scarcity.

In other words, deteriorating technological and energetic development in countries like China, contrary to what is implied by Smil’s narrative, was at least partly the result of imperialism.  The most significant European innovation in energy use, in the use of force to acquire more energy, is what made that imperialism possible.  A book on global changes in energy use that misses this point is missing more than half the picture.

Cronon, William.  2003.  Changes in the Land: Indians, Colonists, and the Ecology of New England.  New York: Hill and Wang.