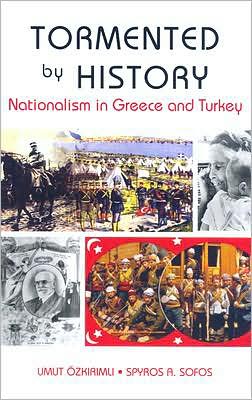 Tormented by History by Umut Özkırımlı and Spyros A. Sofos provides a comparative approach to Turkish and Greek nationalisms from the late nineteenth century to the present.  The strength of the book consists of its comparative approach: while there are many separate works on Greek nationalism and Turkish nationalism, this is one of the first book-length studies that include a parallel account.  The chapters are organized to serve this purpose: each chapter includes two sections in which the same topic is discussed vis-a-vis the Turkish and Greek experience respectively.  The authors take a constructivist and critical approach, particularly concerning official narratives of nationalism.  Their analysis includes an attempt to account for the similarities and differences of the two cases.

Chapters are organized topically rather than chronologically.  Following the introduction, the second chapter focuses on the issue of modernity.  It shows that Greek nationalism was based on identification with the ancient past, which was taken as a model for modernity in the present.  The movement known as “Neohellenic Enlightenment” was largely influenced by European Romanticism’s vision of Greece.  Özkırımlı and Sofos note the contradictions of this phenomenon, which led to the erasure of the Byzantine and Ottoman periods that shaped the culture of contemporary Greece.  The construction of Turks as the “Other” led to a denial of the shared history and culture of Christians and Muslims who lived side by side during the Ottoman centuries.  Yet, as the authors show, “this potent mixture of classicism and modernism could not totally erase the resistance of a lived, Romaic culture carrying in it remnants of a fading cultural memory of Ottomanism” (p. 40).  In the second section of chapter 2, the authors discuss the emergence of Ottomanism, Islamism, and Turkism in the late Ottoman context.  They argue that the late emergence of nationalism in the Ottoman Empire constituted in the first instance an attempt to save the empire rather than to supplant it, while Greek nationalism developed earlier as part of a movement for independence.

The third chapter concerns the issue of identity.  In both Greece and Turkey, religion, language, and a constructed notion of ethnicity played a major role in the development of national identity.  Originally, the Orthodox Church was divided between those who supported Greek nationalism and those who continued to identify with the Ottoman state.  Ultimately, however, the modern Greek nation became identified with the church, which became a basis for its legitimation.  In Turkey, in contrast, Islam had an ambivalent relationship with nationalism.  While the rhetoric of Turkish nationalism disavowed Islam as the basis of identity, buttressing this stance with revolutionary legal changes, in practice, Turkishness continued to be identified with Sunni Islamic heritage.  The Turkish language and a constructed notion of Turkish ethnicity were also important constituting elements of nationalism.  Greek and Turkish nationalisms resulted in attempts to assimilate and homogenize what were in both cases highly heterogeneous populations.  The contradictions, ambiguities, and ambivalence characterizing modern Greek and Turkish identity lead Özkırımlı and Sofos to refer to them as cases of “existential schizophrenia.”

Chapter 4 takes up the topic of history.  The authors demonstrate that while both Greek and Turkish nationalisms were obsessed by history, their relationship to the past is complex and contradictory.  Greek nationalism ignored the Byzantine and Ottoman centuries.  While the Greeks identified “Greekness” with ancient Greece, a major bulwark of European modernity, Turks attempted to establish a linkage between so-called ancient Turkish and European civilizations.  According to the authors, the attempt to link ancient “Turkish” civilization and modern European culture meant “integrating the Turkish nation into the family of modern Western nations while at the same time unsettling the Eurocentric assumptions that underpinned it” (p. 79).  Both official narratives attempted to link contemporary society with ancient society through a constructed past imposed on the population through a variety of means, including the educational system.  The goal was to establish linkages through an imagined history to European civilization as the basis for contemporary modernity.  This resulted in major inconsistencies and contradictions vis-a-vis experienced histories and identities in both societies.1

The fifth chapter focuses on space.  In the case of Greece, the authors suggest that the concept of space preceded the nation.  Greece was identified with the “place” of utopia, which would eventually become the modern Greek nation.  This meant that such populations as the Macedonians, Albanians, and Bulgarians in Greek territory had to “become” Greek.  At the same time, divisions over the definition of Greek territory led to irredentist adventures based on the “Megali Idea,” resulting in the invasion (or return to the homeland) of Constantinople (I Poli or “The City”) and Asia Minor.  While Turkish nationalism avoided expansionism, it constructed Anatolia as the homeland of the Turks, instituting an unforgiving project of social engineering (begun in the Young Turk era) and cultural assimilation, which explicitly and legally rejected the multiplicity of identities in Turkey.  As a result, peoples of Muslim origin were to become Turks, while non-Muslims remained outside the purview of the imagined nation.  The transformation of space included the changing of place names and the forced transfer of populations within the territory to facilitate Turkification.

Chapter 6 discusses in greater detail the politics of homogenization and the status of minorities.  The expansion of the Greek state created national minorities discriminated against by the state and denigrated by the population.  These include Bulgarian and Macedonian Christians, Albanian Muslims, and Muslims of Western Thrace.  In Turkey, Muslim populations, regardless of origin, were subjected to a campaign of forced assimilation to Turkish national identity, whereas non-Muslims were discriminated against and forced in various ways to leave the country.  The rise of the Macedonian and the Kurdish nationalist movements are particular examples of struggles to reject the process of assimilation.  The existence of Muslim minorities in Greece and Christian minorities in Turkey also meant that these states were able to use these populations as pawns in their political struggles with the “Other.”  As a result, these minorities suffered whenever there was tension between the two states, and felt like outsiders in what was supposed to be their nation.

The case studies analyzed in Tormented by History suggest that political expediency and pragmatism as much as ideology and rhetoric played a significant role in shaping Turkish and Greek nationalisms.  The emphasis of the authors on the complexity, contradictions, and ambivalence concerning identity is of particular value.  The comparative approach makes it possible to see that both nationalisms attempted to erase the recent past and to use the ancient past as a means of legitimation for modern national identity.  The discussion would have been strengthened with the use of the concept of Occidentalism, which explains the denigration of contemporary culture and the construction of an identity based on an idealized vision of Europeanness in both countries.2  While the authors underscore the importance of religion in shaping national identity, they do not mention that, in practice, the Christians of Anatolia and the Muslims of Greece identified largely with their regions of origin and were perceived as outsiders by the local population during the forced population exchange in 1923.3

This book will be of particular use as an introductory text on Greek and Turkish nationalisms. Its brevity has meant that a detailed analysis of these cases has not been possible. The decision to organize the chapters by topic results in a fair amount of repetition across chapters. Much of what is discussed in this book concerning the emergence and development of Turkish and Greek nationalism has been said elsewhere; the contribution is that the authors have brought this material side by side. The discussion of the similarities and differences between Greek and Turkish nationalisms enriches our understanding of these particular cases and of the history of nationalism in the post-Ottoman domains.

1  For an ethnographic approach to the construction of modern Greek identity, see Michael Herzfeld, Anthropology through the Looking Glass: Critical Ethnography in the Margins of Europe (Cambridge: Cambridge University Press, 1987).

3  Renee Hirschon, ed., Crossing the Aegean: An Appraisal of the Compulsory Population Exchange between Greece and Turkey (Oxford: Berghahn Books, 2003).

Leyla Neyzi is Associate Professor, Faculty of Arts and Social Sciences, Sabancı University.  This review was published by H-SAE (September 2009) under a Creative Commons license.