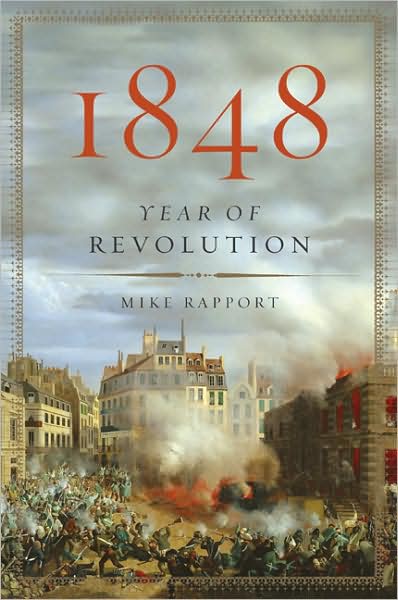 Mike Rapport is one of the few scholars who write European history not as the history of a few select countries, but of the entire continent.  Rapport is at home in the history of the Balkans as well as France, Italy, Germany, Russia, and Scandinavia, and well versed in the historiography published in English, French, and Italian.1  Rapport’s well-rounded viewpoint is one excellent argument for anyone suffering from “1848 fatigue” after the sesquicentennial celebrations and their aftermath in conference volumes and historiographical reviews to put aside any skepticism regarding the possibility of anyone presenting a novel perspective; the book itself is another.  In it, Rapport offers a narrative history of the events of 1848 in those European countries and regions affected directly by the revolution — France, Italy, the German states, Denmark, and Rumania — with some remarks on areas where the impact was more indirect (Britain, Russia, the Ottoman Empire, and Scandinavia).  This book is less obviously an academic textbook than Jonathan Sperber’s excellent survey of the revolutions of 1848,2 and less encyclopedic than the survey of national events and overarching themes edited by Dieter Dowe and others for the 1998 anniversary.3

Rapport divides his book into an introduction and four large chapters.  The introduction presents the tensions that erupted into revolution in 1848: constitutional debates and demands for broader participation in government, the “social question,” and calls for national unity.  Rapport distances himself from interpretations of 1848 as a “bourgeois” revolution.  In line with the results of recent research, he emphasizes the limits of the social impact of industrialization even in the more economically advanced European countries.  The first extensive chapter describes the collapse of the old order in the spring of 1848.  The following three chapters continue the chronological account, but combine it with particular themes.  “The Springtime of Peoples” is concerned with various attempts to institutionalize the gains of the revolution’s first weeks, which led to various clashes between competing national agendas.  “The Red Summer” takes the story forward and highlights the increasing incidence of social conflict that encouraged, if it did not bring about, the split between a radical-socialist Left and a conservative-liberal center.  “The Counter-Revolutionary Autumn” focuses on the resurgence of the pillars of the old order: courts, conservative politicians, and the military, partly exemplified by the return of Louis Napoleon to France.  “The Indian Summer of Revolution” is devoted to the defeat of the remaining islands of revolutionary republicanism in Germany and Italy and to the war against the Hungarian revolution in the first half of 1849.  The book’s conclusion describes the conversion of France’s Second Republic into a Second Empire, but does not pursue the story in other European countries into 1850 (which witnessed Prussia’s attempt to impose a German nation-state from above) or 1851 (when the last remnants of the Hungarian army moved into exile from Ottoman captivity).

Rapport’s account is lively and eminently readable.  Though it steers clear of presentism, the conclusions of each chapter discuss the legacy of 1848 for the history of Europe (and individual European countries) in the twentieth century: debates and decisions on the emancipation of religious and ethnic minorities; the trials and tribulations of parliamentary and republican government; or the paradox of attempts by parties composed of socially privileged members to ally with the lower orders against the forces of order without affecting the distribution of property.

Confusion and chaos were two of the lasting impressions the revolutions of 1848 left behind.  This effect makes organizing any narrative of events difficult.  While it is plausible to (re-)construct a typical revolutionary trajectory (liberal-democratic union, social and national tensions, conservative resurgence, and the revolutionaries’ defeat), these phases occurred in different countries at very different times.  Not all “March ministers” in German states, for example, were actually appointed in spring.4  In Germany, the “red summer” coincided with the peak of the nation-state debate in autumn.  The Indian summer of revolution in some places (notably in Rome, Venice, central Italy, and southwestern Germany) delayed the conservative resurgence until well into 1849, and given Prussia’s non-conservative politics, one could argue that it was only fully in place in Germany in 1851.  The decision to organize the narrative around broad themes thus involves some (inevitable) back-and-forth, thus requiring the reader to keep the chronology in the different regions in mind.

Rapport’s “year of revolution” is clearly centered on France.  The revolutionary events that had already begun in 1846 (the Krakow rebellion, the Lola Montez crisis in Bavaria, or the Swiss civil war), which Karl Marx took to be the beginning of the revolutions, do not seem as decisive to Rapport: Paris provided the spark that set Europe ablaze.  The organization of his book highlights this implicit thesis: each phase of the revolution, the radical Indian summer excepted, begins with an event in Paris that provides a signal of change, transmitted by modern means of communication (telegraph, railway, steamer) to the rest of Europe and setting events in other countries in motion.  Thus the elements of chance, chaos, and contingency, which shaped much of the year everywhere, appear most pronounced in descriptions of French scenes; once the outcome in Paris was decided, it was likely to be repeated elsewhere.  This position could be debated at length — I would be inclined to highlight the variation between revolutionary demands and thus the revolutions’ relative independence.  The model of a central revolution in Paris with complementary revolutions elsewhere also downplays the connections between events: for example, the impact of refugees from crackdowns in Germany (on Marx’s Cologne paper, for example) and Italy on developments in France.

To my mind, Rapport’s account is at its best when it reconstructs the genesis of individual revolutionary events, blending lively and complex narratives with structural observations.  It is somewhat less colorful in its descriptions of individuals.  This result, too, stems from a narrative choice: the story begins in early 1848 and ends in the middle of 1849, thus providing little room for describing the political or intellectual experiences of most revolutionaries — or their fate after 1849.  It is characteristic that most illustrations are of mass scenes, not portraits — except of conservative generals.  Likewise, in contrast to some recent research on the revolutions, Rapport is inclined to treat the military outside France as a fairly homogenous, reliable tool of state power, rather than questioning whether the resurgence of the military might have something to do with the politicization of the armed forces against some of the radicals’ demands.5  This reservation should not be read as a criticism of Rapport’s brilliant book, merely as a description of his narrative choices and his implicit interpretation of the revolution.  Focusing more on individuals and chronology would have involved different problems, such as the need to submerge common patterns too much.  Overall, I do not think a better account of the revolutions could have been written in the space available.

Rapport’s account of the outcome is pessimistic.  France reverted to a Bonapartist empire, though 1848 may have served as an apprenticeship in democracy.  Elsewhere, liberals demonstrated that they preferred national unity to freedom and were unable to even grasp, let alone cope with, the gravity of the social question.  While this account rings more true than some celebrations of the impact of 1848 in commemorations did, one could place a bit more emphasis on the introduction of parliaments and the expansion of the franchise in most German states and the further isolation of non-constitutional regimes in post-1848 politics.

Overall, Rapport has provided a standard survey of the revolution of 1848, one that should attract broad interest inside and outside of the classroom.