In 1999, under newly elected President Hugo Chavez, the Venezuelan people were given a rare opportunity: to participate in the writing of what would become arguably the world’s most radical constitution.  The result of an extensive constitutional process and an assembly voted on by Venezuelan citizens contrasts with the United States constitution, one created by white landholders centuries ago.

The document, carried in the back pockets of ordinary Venezuelan citizens, has become a pillar of the Chavez-led “Bolivarian Revolution.”  For the first time in Venezuelan history the constitution declares housing, health care, and employment as basic human rights and argues in favor of a more participatory form of democracy.

The constitutional process indeed helped empower a number of organizations from the Afro-Venezuelan Network to peasant militias.  These movements not only struggle for the government to uphold the constitution but have become the driving force behind some of Chavez’s most radical policies. 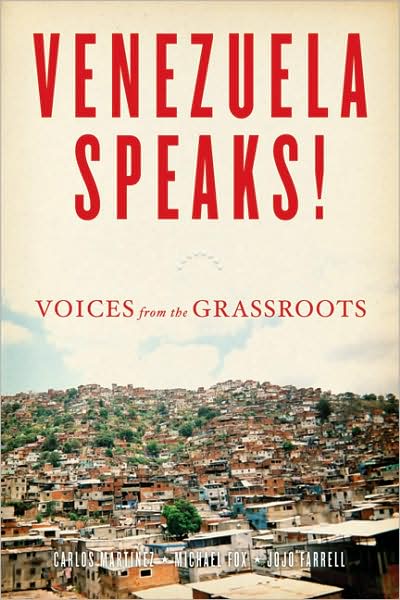 Venezuela Speaks!  Voices from the Grassroots is the first book in the English language that has captured the challenges of bottom-up movements under President Chavez.  In the book, co-authors Carlos Martinez, Michael Fox, and Jojo Farrell offer a much-needed history of revolutionary Venezuela and an analysis of current events, interwoven among interviews with some of Venezuela’s most important leaders among the people.

Fox, Martinez, and Farrell are all part of a small network of internationals who have traveled to remote areas in Venezuela and have lived in the numerous shantytowns that line Caracas’ hillsides.  The result of their time abroad is a collective history of Venezuela that most visitors and certainly US media have not been able to capture.

Through the oral accounts of activists, Venezuela Speaks! also offers insiders’ views of the Bolivarian Revolution and the struggle towards participatory democracy.  The activists interviewed have engaged in occupations of factories and land, the development of popular education, and the creation of an alternative culture and media.

However, readers on the left seeking a rosy account of the “Bolivarian revolution” are likely to be disappointed.  Most of the book consists of interviews with an impressive variety of individuals who refuse to hold back their criticisms.  Their stories bring to life the true struggle for revolutionary change, one that faces two main challenges defined in the first chapter by housing activist Iraida Morocoima.

It is important for people to understand that we are fighting on two fronts: the struggle against the opposition so that they don’t alter our goals, and the struggle against the government bureaucrats that support large financial capital who continue to give these lands to the large construction companies.  That’s why we say this is a process of revolution within the revolution.

The Bolibourgeoisie (a name given to bureaucrats within Chavez’s administration), she argues, serve as a fence between the people and Chavez that often stops the effective implementation of the constitution.

However, as the short-lived 2002 coup d’etat proves, Chavez’s return to office was largely a result of mass mobilization from the grassroots movements.  His mere existence, therefore, depends on the strong support of some of the most radical groups in the country.

The grassroots movements also implement the constitution when the government is unable or unwilling.  As women’s rights activist Yanahir Reyes argues in the book, women’s struggles go beyond the language of gender inclusion used in the constitution.  She goes on to assert that only through grassroots and participatory education will a more gender inclusive culture be created.

While Reyes applauds the government for the creation of institutions to support women, she admits: “[T]he bureaucracy swallows good intentions.  I think it is a mistake to keep strengthening the institutions.  The communities are ready to make the changes.  The struggle continues to be the divide between institutions and popular power.”

The stories told in Venezuela Speaks! also bring into question our own ideas of democracy as solely representative and open the door for a debate on a new form of democracy, one dependent on the active participation of its citizens.

As a result this book should also serve as a tool for activists outside Venezuela, including activists in the United States.  It shows how, through debate, self-criticism, and popular education and media, people are able to free themselves from the manipulation of state and corporate power.

Whether the revolution can go beyond Hugo Chavez and the support of his government is still unclear.  However, what is apparent is the slogan presented in the introduction: “The people have awoken.  With or without Chavez, Venezuela is no longer the same.”

Lainie Cassel has recently returned from living in Caracas, Venezuela.  Currently she is studying in New York City and can be reached at: Lainie[dot]Cassel[at]gmail.com