Ever since the global financial and economic crisis broke, the International Labour Organisation (ILO) has been regularly tracking its impact on the level and quality of employment.  In January 2009, the ILO (International Labour Office 2009) indicated that, under alternate scenarios, global unemployment could increase by between 18 million and 51 million people worldwide from 2007 to 2009.  By June 2009 the range for 2009 had shifted upwards, to an increase of between 29 million and 59 million unemployed over the period from 2007 to 2009.

The most recent estimates put out by the ILO suggest that this range was broadly indicative, though the outcome appears to be closer to its lower bound.  In its January 2010 update, the ILO estimates global unemployment at 212 million in 2009, or around 34 million above its 2007 level, with most of the increase having occurred during 2009.  In sum, the impact of the fiscal stimuli delivered by many governments does not seem to be as yet adequate to stall, let alone reverse, the employment decline resulting from the crisis.  This increase in unemployment was unevenly distributed, with Developed Economies and the European Union, Central and South-Eastern Europe and CIS countries, and Latin America and the Caribbean accounting for more than two-thirds of the increase in the number of unemployed during 2009.  In other words, South-East Asia and the Pacific, East Asia and South Asia were much less affected.

It needs to be noted, however, that in most countries unemployment figures do not tell the whole story.  With social protection inadequate or lacking altogether, those in the working age groups need to take on some form of employment or starve.  Hence, recorded unemployment rates tend to be low.  Thus, what is more telling is a combination of the trends in aggregate employment and more importantly in the quality of that employment.  According to the ILO, in 2009, employment growth became negative in two regions (Developed Economies and the European Union and Central and South-Eastern Europe and CIS countries) while employment growth in Latin America and the Caribbean dropped to near zero.  In all regions except South-East Asia and the Pacific and the Middle East, employment growth declined below the average annual growth in the first half of the decade.

This is surprising, since it is to be expected that countries that are more dependent on foreign trade and investment flows, such as those in South-East Asia, would have been more affected by the crisis.  The region experienced the sharpest reductions in economic growth because of the crisis.  Economic growth in the region as a whole is expected to fall to 0.5 per cent in 2009, down from 4.4 per cent in 2008 and from an average annual rate of more than 6 per cent prior to the crisis.  The countries that have experienced the sharpest declines in growth in 2009 are Cambodia (where growth fell to -2.7 per cent from 6.7 per cent in 2008 and more than 10 per cent in the years leading up to the crisis), Malaysia (-3.6 per cent growth in 2009), Thailand (-3.5 per cent growth in 2009), Singapore (-3.3 per cent) and Fiji (-2.5 per cent).  According to the ILO, the presence of a major economy like Indonesia, which has a large domestic market and is less dependent on trade, has buffered the region, and unemployment in the ILO scenarios is projected to increase by a moderate 1.2 million (with an upper bound of 2 million and a lower bound of 0.5 per cent).

Overall, the presence of countries where growth is largely based on the domestic market is seen as positive from the point of view of the intensity of the downturn and its effects on employment.  In South Asia, the fact that growth in the larger economies like India and Pakistan is based more on the domestic market than exports has blunted the impact of the crisis on growth and employment.

That having been said there are four features of labour market trends in the Asia-Pacific region that need to be noted.  First, there are many small disadvantaged countries, including the small landlocked and island economies in the region that have no domestic market to speak of and therefore are perforce (and not just by strategy) heavily dependent on exports.  Second, three decades of liberalisation have meant that all regions and countries in the Asia-Pacific have increased their dependence on exports, even if to differing degrees.  Third, in almost all countries there are at least a few sectors (whether they be primary products, manufacturing or informational technology services) in each country where export dependence is high.  And, fourth, there are routes other than an export slowdown — domestic demand decline, reduced credit access, etc. — through which the global downturn transmits itself to developing countries, affecting employment even in sectors and industries dependent on domestic markets.

However, underlying the better performance of this region in terms of aggregate employment are certain disconcerting trends.  This comes through from an examination of countries in South-East Asia and the Pacific for which more recent data is available from labour force surveys.  Given the fact that unemployment is the exception for individuals in countries without adequate or any social protection, the impact of the reduction in growth is felt more in terms of deterioration in the quality of employment rather than a decline in its volume.  The ILO defines workers in vulnerable employment as consisting of own-account workers and contributing family workers, who are less likely to have formal work arrangements and are therefore more likely to lack elements associated with decent employment such as adequate social security and recourse to effective social dialogue mechanisms.  As a result, vulnerable employment is often characterized by inadequate earnings, low productivity and difficult conditions of work that undermine workers’ fundamental rights.

Both the proportion and the number of workers in vulnerable employment in South-East Asia and the Pacific have risen since 2008, with the middle scenario providing a projected increase of almost 5 million.  This trend is to be expected, as many workers who have lost their job in export-oriented manufacturing cannot afford to join the ranks of the unemployed and instead will take up employment in the informal sector, perhaps working in agricultural activities or in informal services, such as street vending.

Consider, for example, a country like Thailand, for which employment figures under different status categories are available from the National Statistical Office till as recently as September 2009.  The figures show that if we take average quarterly figures for the first three quarters of 2007, 2008 and 2009, the increase in overall employment fell from around 797,000 between 2007 and 2008 to 686,000 between 2008 and 2009.  But this was accompanied by significant changes in the pattern of employment.  The number of private employees, which grew by 260,000 between 2007 and 2008, declined by 45,000 between 2008 and 2009 because of the impact of the crisis on the country’s export industries.  Over the same periods the increase in the number of own-account workers rose from 116,000 to 444,000 and those in vulnerable employment as per the ILO’s definition rose from 504,000 to 604,000.  Unable to obtain employment in the export industries that had hitherto sustained them, workers were seeking any form of employment in order to survive. 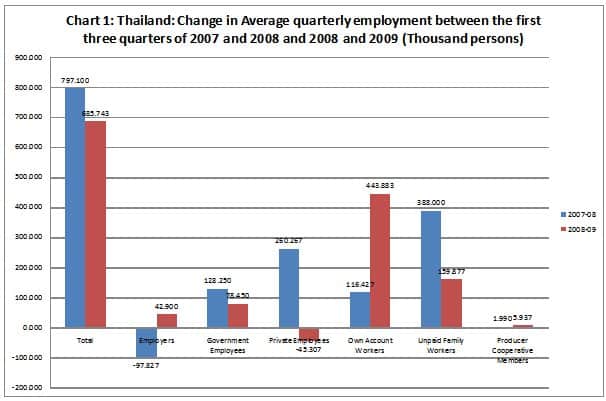 However, the experience differs across countries.  In South Korea, average monthly employment, which rose by 144,833 between 2007 and 2008, fell by 71,750 between 2008 and 2009.  What is remarkable was the sharp rise in the number of jobs lost in the self-employed (from 79,000 to 259,000), unpaid family worker (12,400 to 60,000) and daily worker (57,000 to 158,000) categories.  That is, there was a huge decline in vulnerable employment.  On the other hand, the absolute increase in the monthly average number of regular employees remained more or less constant in the 380,000 range.  One explanation for this very different experience could be that the government’s efforts at a stimulus kept regular jobs rising, but the impact of the crisis damaged sectors relying on self-employed or irregularly employed workers for their survival. 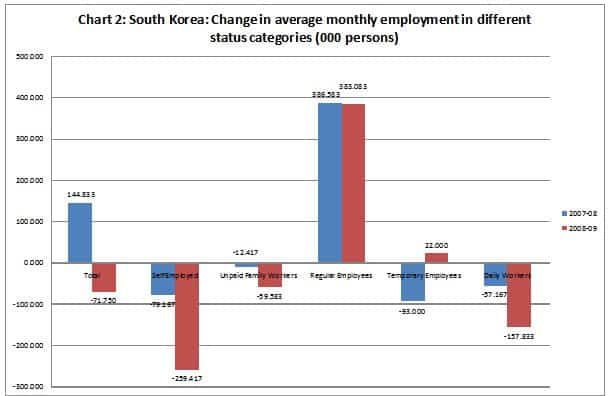 Finally, there are specific groups that have been affected particularly adversely.  Besides marginalised or disadvantaged sections, the impact of the crisis was significant in the case of women and youth.  Women were affected not merely because of the all-prevalent gender discrimination, but also because in many countries there has been some degree of feminisation of export employment, especially in the case of low-value-added, labour-intensive processing.  And with unemployment and underemployment on the rise, new entrants into the labour market among the youth are bound to find it difficult to find themselves decent work.

These trends in Asia are of significance because, at the time when the crisis was just beginning to unfold, optimists pointed to Asia as the shock absorber that would buffer the global downturn.  A decoupled Asia, it was argued, would through its own growth and the demands that it would make on the world’s output ensure that the financial crisis that was largely a phenomenon restricted to the developed countries would not have as damaging an effect on global growth as the pessimists, then in a minority, were predicting.  That prognosis has turned out to be only partially, and in some cases marginally, correct.

What is more, the recovery has been accompanied by a return of inflation to commodity markets, with increases in food and oil prices.  This is seen as making the current recovery driven by large-scale public spending a source of danger inasmuch as it can once again trigger commodity price buoyancy.  And even as the world hesitantly looks forward to recovery the fear that commodity price inflation would threaten the process of adjustment is on the increase.

This fear has created a situation where there is uncertainty about the continued use of the most obvious tool for combating a recession, viz. substantially increased government spending to stimulate demand in the domestic market.  Since the adoption of programmes of economic liberalisation (which included customs duty reductions, indirect tax rationalisation and direct tax concessions), countries have been faced with a reduction in their sources of revenue and in the volume of taxes they garner from traditional sources of revenue.  Hence, enhanced expenditures are often financed with larger deficits, which go contrary to the tenets of fiscal reform.  On the grounds that such deficit-financed spending would trigger inflation, especially in the case of food items, it has been argued that governments, especially governments in developing countries, should desist from relying excessively on deficit-financed government stimuli to combat recessions and rising unemployment.  This could stall the incipient recovery in output and employment in these countries.