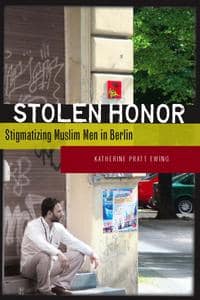 Katherine Pratt Ewing’s Stolen Honor provides an interesting and original approach to analyses of discourses of Islam in Europe by focusing on constructions of Muslim masculinity in Germany.  Pratt Ewing premises her book on the idea that so much attention has been paid to Muslim woman as victim that the stigmatization of Muslim masculinity goes unnoticed.  The need for an analysis of the constructions of Muslim masculinity, Pratt Ewing argues, derives in part from the impacts of the stigmatization of Muslim men.  Because the Muslim man is constructed against the modern “self” of the German national subject, the potential for a sense of full belonging, and thus for full cultural citizenship, is limited.  In particular, because gender equality emerged after World War II as a key ideological site for the articulation of a democratic identity, “The national subject of a modern democracy based on equality and respect for human rights stands as the antithesis of an abjected subject whose sense of belonging must rest on violence and the abuse of women” (p. 3).  This process of abjection also can draw on the differing modes of gender organization and bodily discipline in Germany and Turkey to legitimate assumptions that the Other is incompatible with the principles of democracy and the German constitution, while obscuring forms of discrimination that continue for Turkish and Muslim minorities in Germany today.

Pratt Ewing’s book is particularly valuable in its interdisciplinary perspective.  She reads discourses produced by institutions (particularly state), academia, and popular culture, in conjunction with self-representations of Muslim men.  This enables a complex understanding of the coherence of discourses emerging from these diverse areas.

Section 1 specifically engages with the “mythological” construction of the Turkish man.  Her first chapter provides important historical context by examining the historical constructions of Turkish masculinity by anthropologists; Orientalist travel writers; and feminists, particularly within Turkey.  Bringing together these various points effectively illustrates how the modernizing discourses in Turkey since the early twentieth century dovetail with the construction of the (rural) Turkish man as the traditional, backwards Other within Germany.  Also valuable is a brief summary of the notion of honor in the Turkish context that complicates the notion significantly in comparison to the rather simplified understandings that often have appeared not only in popular discourse, but also in academic discourse.  The next chapter creatively shows how the narrative of the victimized woman in German film has been reinforced by studies in German anthropology.  Although her analysis of films repeats research done within German cultural studies, the illustration of the intersections with anthropological discourse is a valuable contribution to this field.  Furthermore, Pratt Ewing’s reading of a woman’s experience of violence provides a valuable example of how one can and should explore domestic violence in its multiple contexts, not merely ascribing it to an effect of “culture.”  In chapter 3 she illustrates problems with a particularly influential anthropological study in Germany by Margret Spohn, arguing that a misinterpretation of the interview situation led to a reification of already existing stereotypes.1  She contrasts Spohn’s work with an analysis of interviews conducted by herself and her daughter to suggest that Turkish men are aware of how stereotypes impact them, and points to several strategies employed by these men to negotiate the discursive constraints in which they find themselves.  In chapter 4 she discusses the notion of the “white Turk” versus the “black Turk” that has emerged recently in Turkey to mark identities as modern or traditional, respectively.  She suggests that while honor continues to be relevant in that context, it is reconfigured in new ways that illustrate this emerging tension in contemporary Turkish culture and its echoes in Germany today.

In part 2 Pratt Ewing focuses more specifically on the construction of Turkish masculinity in relationship to the German national imaginary.  Chapter 5 critiques the “moral panic” that emerged in the discussion of the “honor killing” of the Berlin woman Hatun Sürücü.  She argues that locating the perpetrator specifically in a traditional Turkish culture obscures the everyday reality of a man in Germany, whose life is at least partially scripted by media accounts of Turkish masculinity and whose everyday life is further marked by encounters with institutionalized discrimination.  Chapter 6 explores the headscarf case and the discussion of girls’ participation in gym class, locating these national discussions in relationship to relevant discussions in the Netherlands and France.  Here she argues that the Muslim body reveals the ways that the German state regulates citizens’ bodies in “a way that the child is not free to resist” (p. 199).  Chapter 7 reviews integration debates via a discussion of the Leitkultur debates to show how the “unassimilated Turkish man” has become a threat to the German constitution itself, leading to the failure to recognize the “forms of intolerance” inherent in many integration policies.

Stolen Honor is an important contribution to German studies and to research on Islam in Europe.  It will be of interest to a wide range of scholars of contemporary Germany, Islam in Europe, or the European Union.  Furthermore, its clear writing style lends itself to use in the graduate, and even advanced undergraduate, classroom, provided those students have some familiarity with the notion of discourse and its use in poststructuralist theory and cultural studies.  In addition to the interdisciplinary nature of the analysis, the strengths of Stolen Honor lie in its juxtaposition of discourses in a number of different spheres; its pointing to new ways to think about violence as located in the present-day of Europe, and not merely a traditional Turkish or Muslim past; and its complex situation of the construction of Turkish-German masculinity in historical and contemporary developments in Germany, Turkey, and other European countries.

The creative analyses and powerful arguments of Stolen Honor are weakened somewhat, however, by a few points.  While a handful of well-known anthropological studies in Germany appropriately serve as her examples of the ways in which academic work has dovetailed with popular and state discourses to limit the terrain on which Muslim or Turkish men are permitted to participate in German cultural citizenship, Pratt Ewing has not engaged with a wealth of work in German anthropology and sociology which has also critiqued these studies.  This is particularly obvious when she quotes informants from an important study by Sigrid Nökel, but does not engage with Nökel’s analysis itself.2  As I mentioned above, there is also already a significant body of work on Turkish-German film relevant to Pratt Ewing’s discussion of film.  A wealth of research analyzing the headscarf cases in Europe exists in English as well but is not addressed in Stolen Honor.  Some theoretical engagement with the fields of masculinity studies and whiteness studies would also have strengthened the book.

The lack of engagement with masculinity studies and whiteness studies, which have emerged in the German context largely in conjunction with feminist work, may be explained by Pratt Ewing’s somewhat antagonistic approach to feminist work.  For example, she states that African American feminist work such as that by bell hooks could only problematize African American feminism by repeating existing stereotypes, a simplistic assessment at best (p. 13).  Pratt Ewing is right to point to the role that some feminists, including several feminists with migration heritage, have played in developing and reifying the image of Muslim men in Germany.  It is unfortunate, however, that she replicates the dominance of these voices by ignoring the decades-long history of German feminists of color and feminists of migration heritage who have sought to challenge mainstream feminists.  To be sure, this issue has been an ongoing difficulty for American and German scholars alike, and is by no means unique to Pratt Ewing’s work.

Overall, Pratt Ewing’s book serves as a fascinating contribution to German and European cultural studies.  It provides an important new perspective on constructions of otherness in Europe, one that has the potential to push academic analysis of Islam in Europe in valuable new directions.

Beverly M. Weber is Assistant Professor at the Department of Germanic and Slavic Languages and Literatures of the University of Colorado at Boulder.  This article was first published by H-German (February 2010) under a Creative Commons license.