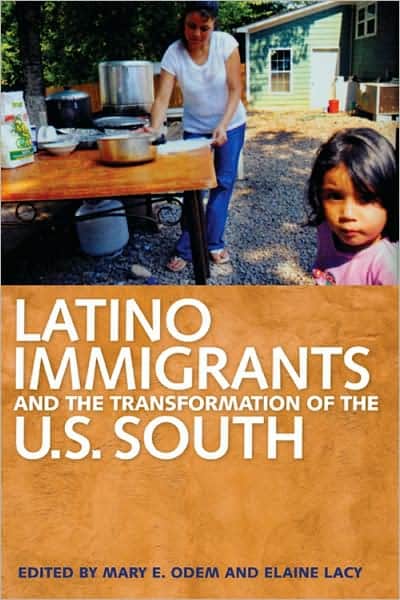 In the past two decades, the Latino population of the American South has grown faster than in any other region of the United States.  From a relatively insignificant urban minority in the South of 1990, by 2005 Latin American immigrants were settled in nearly every county of the former Confederacy, and scholars across a number of disciplines are now beginning to acknowledge the vast social, cultural, and economic transformations this demographic influx has brought.  In the past few years, a number of essay collections and articles (though notably few monographs) have appeared that examine the recent globalization of the southern population and economy, often looking at local dynamics of global phenomena.  Mary Odem and Elaine Lacy’s edited volume Latino Immigrants and the Transformation of the U.S. South, the product of a 2004 interdisciplinary conference at Emory University, is a valuable addition to this growing body of literature.  Composed of nine essays by historians, geographers, anthropologists, and public policy scholars working both within the United States and Mexico, the book is loosely organized around four major themes, which will also serve to structure this review: immigrant culture, identity, and transnational community formation; Latino labor and the economic impacts of immigration; the transformation of racial dynamics with the shattering of a binary understanding of black and white; and the evolving response of native-born southerners to their newest neighbors.

In contrast to popular conceptions of immigration as the unidirectional movement of poor people to rich nations, wherein migrants’ “traditional” identities inevitably give way to a linear process of Americanization, the volume’s essays reveal recent migration from Latin America to the U.S. South to be decidedly circular, a complex process that has forged hybrid identities, nationalities, and senses of belonging.  Especially in the case of Mexican migrants, who make up the large majority of the region’s Latino population and for whom migration abroad is often temporary and multi-sited, cultural adaptation and community formation in their newest homes have been structured by a “sojourner mentality,” as Lacy demonstrates in her chapter on Mexicans in South Carolina.  Though only a minority of Lacy’s interviewees planned to settle permanently within the United States, they were nevertheless active in building settler enclaves, wherein restaurants and tiendas offering familiar foods, music and other cultural forms eased the transition to life and work in South Carolina.  But if Lacy celebrates the successful forging of a flexible “cultural citizenship” that transcends national borders, Rosío Córdova Plaza, in her essay on migrants from the Mexican state of Veracruz, is far more pessimistic about the structural challenges workers face in their seasonal and cyclical labor migration.  Because of the U.S. government’s unwillingness to legally recognize the transnational labor circuits that fuel countless industries in the South and elsewhere, undocumented immigrants are forced to inhabit a world of instability, fear, and constant vulnerability.  The lack of legal status too often means that workers are at the mercy of exploitative employers or become targets of petty crime, unable or unwilling to seek the aid of local law enforcement or workers’ rights groups.  More often than not, immigrants’ undocumented status benefits those eager and willing to exploit them.

Questions of work and economic opportunity are central to each of the volume’s essays, as the recent influx of Latinos to the South has been a labor migration above all else.  Often actively recruited by expanding, low-wage industries such as construction, agribusiness, and food processing, Latino workers first arrived to the South in the 1980s, either from the American Southwest or from sending regions in Mexico and Central America.  Migration was initially anchored in local enclave industries that aggressively sought immigrant labor, whether in carpet production in Dalton, Georgia, or poultry processing in Scott County, Mississippi.  While employers’ rhetoric that immigrant recruitment filled gaps in worker availability was sometimes true, as white and black workers across the South increasingly left food processing and agricultural jobs, in many cases the preferential hiring of immigrants, especially undocumented ones, was an active strategy to replace workers considered too demanding with ones believed to be more submissive.  As Angela Stuesse demonstrates in her essay on Mississippi poultry workers, racial divisions between white, black, and Latino workers are often exploited by managers, though labor organizers are slowly beginning to reach across cultural borders to forge a labor movement that transcends race and nationality.  However, such attempts often collide with lingering resentments among both white and black workers that Latinos “steal” jobs or depress wages, both common claims among anti-immigrant groups in recent years.  But in analyzing this myth within North Carolina, economists James Johnson and John Kasarda argue that if recent immigrants do present a minor drain on state spending through their use of health and education services, they make up for it many times over with job creation and spending power.  Rather than extractive “freeloaders,” as nativist opponents continue to assert, immigrant workers have been essential, though often unacknowledged, agents in recent Sunbelt economic growth.

Any discussion of immigration to the U.S. South would likewise be incomplete without attention to race.  While the region’s historical white racism is by no means exceptional, the South does remain nationally distinctive in its relatively high proportion of African American residents, and the interaction between southern blacks and recent immigrants has been a central problem upon which scholars have focused.  While many black leaders have symbolically reached out to the Latino community, the daily interactions of African Americans and recent immigrants have been far more strained, as Stuesse points out in the case of Mississippi, and Raymond Mohl for Alabama.  Both groups often rely upon stereotypes of the other, as immigrants are slow to acknowledge blacks’ long and difficult history within the South and fall back on the anti-black racism common to many parts of Latin America, while blacks blame individual Latinos for lowered wages and decreasing opportunities.  Though the 2006 protests for immigrant rights symbolically drew on the legacy and rhetoric of the civil rights movement, any potential alliance between southern blacks and Latinos remains tenuous.  Yet to assume that recent immigration has simply added a third element in a now-tripolar racial configuration is wrong, and in her essay geographer Jamie Winders reminds us that Latinos are only one of many immigrant groups seeking visibility within southern society.  In Nashville, where a large refugee population from eastern Europe and the Middle East has complicated monolithic representations of immigrants and race, the city government’s strategy of grouping Latinos and refugees together as an “international” community has concealed the many differences between legally sanctioned refugees and undocumented Latino workers.

While some observers might assume that the South would be inherently hostile to arriving immigrants, either because of the region’s racial history or lack of earlier immigration, nearly all of the essays in Lacy and Odem’s volume demonstrate that during the 1980s and 90s, southern society was more often welcoming and open to those who arrived.  Indeed, many immigrants who left the xenophobic atmospheres of late-twentieth-century California and Texas found southern states such as Georgia and Arkansas far more hospitable, where local residents were more curious than hostile towards their newest neighbors.  But in the wake of the terrorist attacks of September 11, and the economic downturn of the years that followed, along with the increasing visibility of a quickly-growing Latino community, nativism exploded throughout the South as it had in the Southwest.  Anti-immigrant hostility took many forms, from restrictions on immigrants’ use of public space, as Odem demonstrates for the case of Atlanta, to the “English-only” campaigns that Odem and Lacy describe in the book’s final essay.  A generation since the beginnings of large-scale Latin American migration to the South, immigrants today face a decidedly more hostile and antagonistic society than they did in earlier years.

While Odem and Lacy have successfully brought together nine insightful essays from a broad range of multinational and multidisciplinary scholars, the book remains a limited introduction, due somewhat, in all fairness, to the inherent limitations of an essay collection.  The essays, often shorter than fifteen pages each before notes, are sometimes unable to move beyond broad generalizations within the small space they are allotted.  And even though it was edited by two historians, the collection does not go far enough in linking recent demographic and economic change with the region’s longer history.  The booming industries that recruited so many immigrants, such as poultry processing and large-scale agribusiness, were not creations of the 1980s but of mid-century change, as the postwar South joined the West in forging a new low-wage, suburban- and consumer-oriented Sunbelt economy.  Too often, the demographic changes illustrated by the volume’s contributors appear to be playing out upon a static backdrop that does not acknowledge the massive (trans)national economic transformations that remade the United States after 1945.  Likewise, in their introduction, Lacy and Odem do not sufficiently prove the usefulness of keeping “the South” as a geographical container for understanding recent immigration history.  Rather than a world apart, the South of the 1980s and beyond was firmly embedded within the Sunbelt economy, and to exclude Texas and Florida from examinations of recent immigration, as many scholars have done and continue to do, might be to construct artificial boundaries where none actually existed.  The nagging questions of southern exceptionalism and how one defines “the South” emerge throughout the volume, and deserve more serious contemplation.  Nevertheless, Odem and Lacy’s volume is a valuable contribution to a young and developing field.  As scholars continue to interpret the transformations that recent immigration has wrought, they will undoubtedly return again and again to the questions that this handy volume has posed.

Tore Olsson, University of Georgia.  This review was first published by H-Southern-Industry (February 2010) under a Creative Commons license.