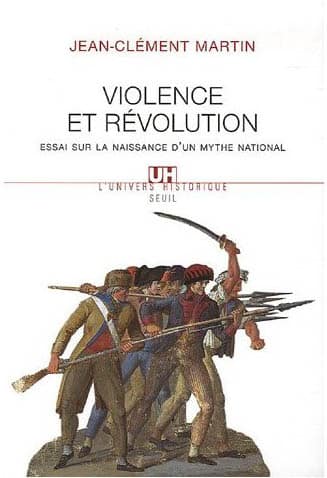 This work subtitles itself an “essay on the birth of a national myth”.  The “myth” in question, as the first pages of the Introduction make clear, is that of the Revolution as a uniquely problematic episode of violence.  Martin’s argument, sketched out with a brief glance at the relevant historiography, is that the supposedly exceptional violence of the Revolution has been used as a device in contemporary political reflections, all the way through to the “antitotalitarian” polemics of the 1980s.  Martin proposes instead to offer “une lecture désacralisée de ces années 1789-1799” (p. 10).

What results from this ambition is less of an essay than a narrative, and one in which a great many pertinent points are mixed with some banalities and oddities.  It is difficult to dispute many of the observations Martin makes throughout this study.  His first chapter on “La violence de l’Ancien Régime” is an exemplary survey of the immense complexity of recourse to violence, both physical and discursive, in the pre-revolutionary era, and of the changes and continuities that circled towards a particularly knotty collision of perspectives and practices.  His observations on many conflicts, national and local, are hard to fault, and always humane.  The rebel cities of 1793, Lyon, Marseille, and Toulon, had “histoires locales tellement conflictuelles que les conciliations même tactiques face à Paris sont devenues impossibles” (p. 170).  Writing on the local violences of late 1793, the so-called “anarchic Terror”, he takes on board Lynn Hunt’s ground-breaking political sociology of the revolutionary activist, and observes that “selon la priorité accordée à la question, leurs positionnements ont varié du moderantisme au sans-culottisme”; while attached to various forms of extraordinary measures, such men applied them in limited and often short-term moves to deal with local crises, “les clubistes eux-mêmes sont pour l’essentiel préoccupés des intérêts de leur communauté.” (p. 184).  The Vendée is reviewed, as one would expect from Martin, dispassionately and with consideration of the twentieth century’s long experience of war-crimes — how the deployment of badly-led and ill-equipped troops, subjected to political sloganising, “la peur continuelle et l’entraînement collectif” can bring to the fore savage instincts, licence the actions of the most violent among them, and create a situation where “la contrôle de la violence” becomes effectively impossible (pp. 201-2).

One of Martin’s strengths is to insist on providing concrete examples for the complex sociopolitical processes he unravels.  But he almost never sources this information.  A relatively brief chapter-bibliography allows one to guess at some references, but most must be taken on trust.  This becomes further more problematic when, with increasing frequency, Martin draws systematising conclusions from his brisk narrations.  So we learn, in an early example, that the Réveillon riots of April 1789 “illustre le rejet d’un large part de la population urbaine des réussites individuelles” (p. 58).  Réveillon’s pre-1789 career as an entrepreneur is juxtaposed to a formless resentment, rather than to any more detailed consideration of the famine-plot beliefs that brought about the pillage of his property.

But it is with Martin’s larger argument that I wish to take issue.  While he is properly sensitive to the nuances of so many aspects of the topics he reviews, there is one blind-spot which makes many of his other conclusions problematic.  This is embodied in the title of his fifth chapter, which deals with the central six months of 1793 under the heading “violences et défaut d’état”.  Here, Martin is concerned to repulse two images deriving from a false impression of the magnitude of revolt and the supposed isolation of Paris — the contradictory notions of Jacobin virtue besieged, and of the revolutionaries as “le modèle de l’État totalitaire” (p. 155).  As elsewhere in the book, graphic use of specific (albeit unreferenced) examples is allied to a broad-ranging and careful review of circumstances, psychologies, and unintended outcomes — how, for example, by elevating death-defying heroism, the revolutionaries also ensured that “les limites ordinaires des règles sociales n’ont plus cours devant l’urgence comme devant l’importance de la tâche à accomplir” (p. 178), and, thus, licensed a brutal response to the mythologising accounts of counter-revolutionary violence in circulation.  Even more analytically central to his argument is a related point, that “la violence la plus brutale est rendue possible dans beaucoup de régions, où les conflits d’autorité permettent les interventions de multiples groupes et d’individus investis de pouvoirs” (p. 179).

The analytical structure that Martin gives afterwards to the classical period of “The Terror”, September 1793-July 1794, becomes woven around a theme which is surprisingly banal: that state power was somehow “lost” in the summer of 1793, contested in the autumn, regained slowly in early 1794, and driven to an intolerable peak in the summer of 1794.  Whence “Thermidor”, and a new set of problems for the power-holders of the Revolution, “sortir de la Terreur ou l’utiliser” (the title of chapter 7).

Yet one runs into an immediate paradox here, and it is one that has been articulated before, in an unrecognised form, by Patrice Gueniffey.  In his Politique de la Terreur, Gueniffey describes the “anarchic Terror” of late 1793 as a period of “proliférations de positions de pouvoir dont les compétences ne cessaient de croître” seeing “à tout les échelons de féroces affrontements pour conquérir ces positions, pour les conserver, pour en protéger ou en élargir la juridiction.”  Explicitly using the words “anarchie” and “anarchique” to characterise this, Gueniffey seems oblivious to the logical contradiction: how can a contest for the appropriation of state power be “anarchic”?1

Martin, to his credit, recognises at least some of the quality of this paradox.  He notes that the “situation confuse” of these months “où l’autorité de l’État est si peu assurée que chaque groupe peut prétendre l’incarner” will lead to a reinforced sense of need for a strong central state, and a sharply-drawn, increasingly nationalistic response to foreign enemies: and thus to a potent state, “supprimant le défaut d’État qui a libéré ce déchainement de violences” (p. 214).  But Martin here does not see the deeper paradox, that it is the very idea of the violently sovereign state which is explicitly not called into question by this supposed “défaut”, and which has run through every episode of revolutionary violence, whether enacted by the possessors of formal state authority, or those merely sympathising with what they understand to be the Revolution’s goals.

The complex resonances of the idea of sovereign violence, elucidated two decades ago by Paolo Viola, run through Martin’s work without ever quite making it to the surface of his discussion.2  He is pointed, for example, on the identification with, and acting out of, such violence in the rallying of volunteers for war service, and the examples of sacrifice to which they were exposed to (pp. 130-32).  Yet he speaks of the popular-radical mobilisations that would eventually topple the king as “échappant à toute autorité . . . dans l’illégalité et l’impunité” (p. 133) — technically true, but politically tone-deaf.  It is similarly misleading, when commenting on the troubles of the summer of 1791, to speak of the difficulties of “les détenteurs de l’autorité” and their “gestion étatique” (p. 118) without questioning more closely the connection between such a state and the opponents who were sure that they were the sovereign people.  One might take this critique back even to the Réveillon riots of April 1789, noted above, where Martin reports the politicised cries of the rioters before reverting to his conclusion of their anti-arriviste motives, but two pages later will allow that “une véritable contamination politique” spread across the country at the time, even drawing in peasants to make political claims in their insurrections (pp. 57-59).

Martin notes the famous observation of François-Noël Babeuf in 1789 that the ancien régime was at fault for the violence of the revolutionaries: “Les maîtres, au lieu de nous policer, nous ont rendu barbares parce qu’ils le sont eux-mêmes” (p. 15).  This, however, places a focus on the exercise of punitive justice, “la torture, la roue, les bûchers, les gibets”, and not on the assertion of sovereignty that underlay such oppressions.  If this work is an “essai sur la naissance d’un mythe national”, it perhaps also needed also to be an essay on the birth of the myth of being “national”.  Howard Brown has recently written very persuasively on the dissolution, through the later 1790s, of a consistent connection between violence and politics — how the recourse to “solipsistic” violence to resolve even minor personal disputes led ultimately to the revival of a state apparatus that consciously set itself apart from the dangerous population.3  Martin’s text very effectively deals with the precursors of that position, the “how” of the escalation of political violence to the point where it could break free in that fashion.  What neither it nor others such as Gueniffey have really shown us is the “why”.  I suspect we need to dig much deeper into the connections between identity, power and violence in late eighteenth-century France.  What mechanisms of understanding allowed those local activists — so widely now acknowledged as primarily defending their own interests — to join so willingly in acting out Viola’s “eminently violent” sovereign power?4  What concepts of being French, of being “the people”, of being “the Nation”, licensed a popular violence that was above all punitive — all those paraded heads (and other gruesome body-parts, see pp. 161-62) on display just as the ancien régime had displayed its victims — and which beyond punishment called over and over again for enhanced state action, legislative and executive, au nom du peuple?5  If the Nation is the Republic, then in a very real sense the People are the State.  Is the problem of the Revolution not, perhaps, a “défaut d’état”, but rather that the claim of a monopoly of legitimate violence was taken too seriously, by too many?

David Andress, University of Portsmouth.  This review was first published in H-France Forum 2.2 (Spring 2007); it is reproduced here for non-profit educational purposes.  See also the review essays on this book by Lynn Hunt, Sophie Wahnich, and D.M.G. Sutherland, as well as Jean-Clément Martin’s response to all four review essays.