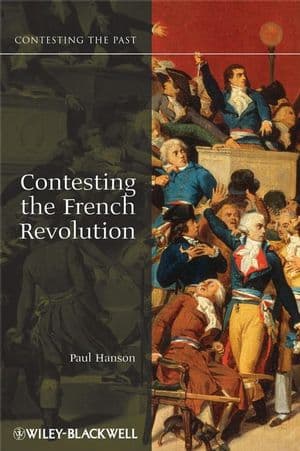 When Blackwell published a volume on the French Revolution in its Essential Readings in History series in 2001, Ronald Schechter began his introduction to it with a section titled “the shadow of Furet.”  “It would be difficult,” he wrote, “to exaggerate the impact of Furet’s analysis on the historiography of the French Revolution over the past three decades.”1  Paul Hanson’s new book, from the same publisher, now named Wiley-Blackwell, provides a measure instead of the extent to which recent work on the Revolution has emerged, not just from the shadow of François Furet, but also more generally from the highly politicized and often very personal conflicts that until very recently dominated revolutionary historiography: Marxists against revisionists; “neo-Jacobins” against conservatives, Furet against Soboul.  Concentrating his analysis on the scholarship of the last twenty years, Hanson demonstrates not only the depth and originality of that scholarship but also its liberation — and for that matter, the freeing of the Revolution itself — from the controversies of the past.  This is not to say that the Revolution does not remain contested territory.  Hanson shows that it still excites fierce debate.  Many of the old questions have continued relevance.  Nevertheless, as our own times and the discipline of history have changed, new questions and issues — most notably those concerning gender, slavery and colonialism — have emerged to transform or to take the place of the old.

Designed as an introduction both to the Revolution and to the historical controversies that surround it, Contesting the French Revolution is an assured, erudite survey of recent scholarship by an accomplished historian of the Revolution.  At once comprehensive and concise, balanced in its judgments but penetrating in its analysis, this invaluable book will no doubt inspire senior undergraduates with something of the author’s evident passion for the French Revolution and for the innovative research it continues to generate not only on both sides of the Atlantic, but also as far afield as China and Australia.  Although Hanson is more concerned to explain the interpretations of others than to impose his own views, the latter are that much more persuasive for the measure and restraint with which they are expressed.

Although the book largely follows a chronological structure, with central chapters devoted to the major events of the Revolution, these are bracketed by two thematic chapters, focused respectively on the issues of the Revolution’s origins and the violence that, for some at least, defined it.  There is also a concluding chapter on the legacy of the Revolution.  The chapter on origins — Hanson follows William Doyle in preferring this term to “causes” — exemplifies Hanson’s approach.  Having pithily summed up the debate between Marxists and revisionists, he concentrates his attention on considering where the most recent scholarship leaves us with respect to the controversies that so fiercely engaged an earlier generation of historians.  He demonstrates that the historical pendulum has settled into a sort of middle ground.  The challenge to the Marxist orthodoxy of a bourgeois Revolution has resulted not only in far more emphasis on the intellectual and cultural origins of the Revolution, but also in an ever-expanding list of possibilities as to where those origins might be located: in writings of the philosophes, polemics of Jansenist parlementaires, published briefs of lawyers engaged in high profile cases, libels of grub-street hacks, paintings of the salons, plays performed at the theatre, or in rumors that circulated by word of mouth in the streets of Paris.  Each of these dimensions has found its historian or historians to assert its significance.  Controversy persists concerning the precise relationship between the Enlightenment and the Revolution, as well as concerning the definition and significance of the concepts “public sphere” and “public opinion” upon which much recent attention has been focused.  Despite their best efforts, however, the revisionists have failed to demolish entirely the theory of social origins.  Recent scholarship points not only to the dynamism of the eighteenth-century French economy but also to the existence of significant differences of status, lifestyle, culture and wealth between the nobility and the upper reaches of the Third Estate.  Furthermore, analysis of the cahiers of 1789 indicates deep-seated and growing resentment on the part of the rural peasantry against the system of seigneurial dues.  The weight of the evidence, according to Hanson, does not support the view that the Revolution was avoidable or that it was the result of a purely political crisis.  There were profound structural causes — economic, social, cultural and institutional — that underlay the revolutionary crisis.

The subsequent chapters focus in turn on the major events of the revolutionary decade: 1789; the Declaration of Rights and the Abolition of Feudalism; the Constitutional Monarchy; the Republic; Regeneration and Terror; Thermidor and the Directory; and the Rise of Napoleon.  In his survey of these topics, Hanson pays close attention to often subtle nuances that distinguish the interpretations of particular historians.  He demonstrates, for example, that there is substantial agreement between the interpretations of the Great Fear provided by Georges Lefebvre, Peter Jones and Clay Ramsey but that they also diverge in significant respects.  Lefebvre emphasized the common interests that united peasants of different status against their seigneurs, while Jones noted internal divisions within the peasantry, and Ramsey pointed to tensions between townsmen and peasants.  Likewise, in considering interpretations of women’s claims to citizenship during the French Revolution, Hanson tidily sums up the generally positive views of Lynn Hunt and Dominique Godineau for whom it was commendable that women’s rights were on the revolutionary agenda at all, the negative view of Joan Landes which emphasized the misogynistic attitudes of most revolutionaries, and the middle of the road position of Olwen Hufton which pointed to the “limits of citizenship.”

In addressing the critical interpretive issues of the revolutionary decade, most notably the questions of why the constitutional monarchy failed and what caused the Terror of 1793-94, Hanson expresses reservations concerning Furet’s view of the radicalization of the Revolution and the drift towards terror as the inevitable working out of the implications of revolutionary ideology.  He focuses instead upon the role of more contingent factors, particularly the divisions and tensions that were generated in French society by the Revolution, and of key events which may have been decisive “turning points”: the October Days, the approval of the Civil Constitution of the Clergy and the clerical oath, and the Flight to Varennes.  In this respect, the research of Timothy Tackett on the clerical oath, the politics of the Constituent Assembly and the royal flight to Varennes comes into its own.  While accepting that revolutionary ideology, articulated by Robespierre and St. Just, gave an important impulsion to the Terror, Hanson doubts whether their arguments would have been compelling in the absence of the circumstances of foreign and civil war.  Hanson’s chapter on the Terror focuses not on the imperatives of Robespierrist discourse (Furet) or of sans-culotte militancy (Soboul) but instead on the representatives on mission and on the regenerative urge that manifested itself in culture, education and social welfare.

Above all, Hanson emphasizes the importance of viewing the Revolution as French, rather than as uniquely Parisian, insisting that the Parisian dog did not always wag the provincial tail.  The “happy year” of 1790 does not look so happy when viewed from the perspective of the midi, where the Revolution revived long-standing religious animosities, or from that of the west, where the Civil Constitution of the Clergy was greeted by widespread resistance.  Colonial affairs also deserve to be taken into account, since the slave revolt in Haiti impinged significantly on the political struggles in Paris, generating a shortage of sugar which prompted popular unrest in Paris which in turn helped the Montagnards in their contest with the Girondins.  That contest also had an important provincial dimension that Hanson explains by emphasizing the broadening and intensification of political activity in provincial cities and towns following the advent of universal manhood suffrage in 1792.  The rivalry between Girondins and Montagnards was at once a contest between different notions of political sovereignty and a struggle, culminating in the federalist revolt, for hearts and minds in the provinces.

Completing his survey of the revolutionary decade, Hanson shows that some of the most original recent scholarship has focused on the Directory, reversing the long-term neglect of that topic.  While it is apparent that the Directory can no longer be cavalierly dismissed as a reactionary way-station between Robespierre and Napoleon, it is equally clear that there is no scholarly consensus concerning its significance.  Recent works by James Livesey and Howard Brown seem particularly discordant.  Livesey emphasizes the significance of the Directory in elaborating the practice of democratic politics while Brown focuses upon the repressive policies of the regime and its preparation of the authoritarian “security state” under Napoleon.  Judgments of the Directory necessarily impinge upon those of Napoleon, whose relationship to the Revolution was profoundly ambiguous.  It is clear that in many respects Napoleon built on the legacy of the Revolution in shaping the administrative structures of the modern state.  It is equally clear that in consolidating his own personal power, he systematically sacrificed the principle of liberty that was for many the guiding light of the Revolution.  Hanson draws on the work of Isser Woloch, Steven Englund and others to point out the many paradoxes and ironies of Napoleon’s rule.  Not the least of these was his successful imposition of conscription on the countryside, which made possible the wars that were the most disastrous consequence of the Revolution.

War was one of a variety of forms of revolutionary violence.  Hanson’s discussion of this variety is particularly thought-provoking.  He insists upon the importance of contextualizing the violence of the Revolution in order to understand it, noting that those who condemn the Revolution often do so by identifying violence as its essence and then isolating its violent acts from their context.  He makes important distinctions between various types of popular violence, ranging from “popular protest” (storming the Bastille) to “popular vengeance” (the murders of Foulon and Bertier de Sauvigny) and “popular justice” (the September Massacres).  The state violence of the Terror and of the Directory is also considered, as is the counter-revolutionary violence of the Vendée and the White Terror.  There are insightful comparisons of how revolutionary violence is dealt with in the writings of Jean-Clément Martin, Simon Schama, Howard Brown and others.  Finally, after considering the “routine violence” which imposed a regime of deprivation and despair on the poor, Hanson makes an eloquent plea to recognize the humanity of the victims of all forms of violence.

Hanson hardly needs to insist that the issues of revolutionary violence and war are of immediate relevance to our own world.  He concludes his book with a passionate affirmation that the democratic and egalitarian ideals of the French Revolution continue to resonate in today’s world and that the dilemma of how “to prevent a politics of hope from degenerating into a politics of fear”(p. 197) is as pressing a concern today as it was during the French Revolution.  This book will surely convince readers that the Revolution continues to speak to us.  Students embarking on the study of the French Revolution will find no better guide than Hanson to its often confusing events and the debates surrounding them.  They will also be left in no doubt that they are beginning a journey that is varied, rich and exciting.

Ian Germani, University of Regina.  This article was first published by H-France Review 10.61 (April 2010); it is reproduced here for non-profit educational purposes.