Martin Axmann.  Back to the Future: The Khanate of Kalat and the Genesis of Baloch Nationalism 1915-1955.  Oxford University Press, 2009. 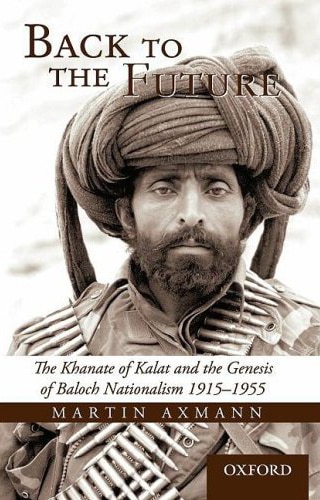 In a country where nationality is defined in terms of religion and religion alone, “the Baloch nation” can hardly find a legitimate space, even as a term of reference.  There is no notion in the minds of the powers that be of a nationality other than an exclusive and sweeping “Pakistani.”  History and political reality, however, informs us otherwise.  The secession of East Pakistan taught the hard lesson that national identities cannot be brushed aside and diversity cannot be suppressed by military might.  This fundamental lesson of 1971 is still glossed over in what remains of Pakistan.  Perhaps the secession of East Pakistan is the reason, amongst others, that the subject of Baloch nationalism evokes a passionate response from the supporters of a single Pakistani nation.  The ruling establishment of Pakistan denies the very existence of a Baloch national movement, calling it a product of external forces.  They insist on one Pakistani nation — absolute and united.  Baloch nationalists, in response, make no bones about marking their distinction from the rest of Pakistan.  In order to demonstrate the persistence of a Baloch national identity from time immemorial, they raise this discourse to mythical proportions.

Martin Axmann in Back to the Future: The Khanate of Kalat and the Genesis of Baloch Nationalism 1915-1955 rejects both the absolute negation of Pakistani nationalists and the grandiose exaggeration of Baloch nationalists.  He argues that nationhood is a product of modernity which disrupts the traditional balance of society and creates new constellations of shared interests through industrialization, print capitalism, mass education, and the proliferation of modern territorial states.  The genesis of Baloch nationalism, in this framework, lies precisely in the disruptive effects caused by modernity and, particularly, the replacement of the traditional elites in Baloch society.  For Axmann, two events are of crucial importance in the formation of Baloch national identity: the inclusion of the Khanate of Kalat in the British Indian Empire during the late nineteenth century and early twentieth century; and the partition of India and the emergence of Pakistan on the map of the world in 1947.

The British interest in Balochistan began with the First Anglo-Afghan War (1839-42) and was motivated by the need for safe passage for troops and supplies.  The Treaty of 1854 required the Khan to maintain better control over the Marri and Bugti areas that threatened neighboring British Indian districts.  The Treaty of 1876 that eventually came to govern the relationship between the Khanate and the British Empire affirmed the independence of Kalat and the sovereignty of the Khan.

Around the same time, British policy took a radical shift in a manner that would have a far-reaching impact on the State of Kalat.  Fearing Russian encroachment, the British administration decided to take an active interest in the internal affairs of Kalat to guard against instability.  By implementing the Sandeman system (named after Major Robert Sandeman, the Agent to the Governor General in Balochistan), the British moved to support the local sardari concerns (by granting financial favors, titles, and administrative functions), introduced intertribal councils of elders (jirga) for dispute resolution, and put into practice a police and administrative machinery (levy system).  Although Kalat was treated as an independent and sovereign state by the British administration, the Sandeman system opened the gates for British interference that gradually undermined the authority of the Khan of Kalat.  In the words of a Baloch nationalist, the Sandeman system “tamed and bribed the chiefs at the cost of the people.”

Time went by until Khan Ahmed Yar Khan became the Khan of Kalat in 1933 with the desire to restore the lost glory of his state and to reclaim his status as the Khan-e-Azam of the Baloch tribes.  The Khan understood well that Kalat remained a sovereign state, at least on paper, unlike the other princely states of British India.  He, therefore, wanted to reaffirm his sovereignty and independence.  However, the dreams of the newly appointed Khan were shattered by the Government of India Act, 1935, which listed Kalat as an ordinary princely state of India represented in the federal government.  The Khan did not let this act of unilateralism pass him by.  The treaties of 1854 and 1876, he argued before the British authorities in various representations, conclusively determined the relationship between Kalat and British authorities and recognized Kalat as an independent state.

In order to avoid a controversy, the British formally affirmed the unaltered status of the 1876 Treaty, though the Government of India Act, 1935 explicitly stated otherwise.  The issue, though unresolved, was deferred with the advent of the Second World War.  More pressing concerns were at stake.  The status of the Khanate of Kalat remained unsettled, only to be picked up again at the time of the partition of India.

The 1920s and 30s are also important in Baloch history because they witnessed the growth of independent political organizations.  The two landmark “All India Baloch and Balochistan Conferences” organized by Anjuman-e-Ittehad-e-Balochan-wa-Balochistan raised the concerns of the Baloch people for the first time.  The Kalat State National Party, formed with the support of Khan Ahmed Yar Khan in 1936, was banned in 1939 for overtly criticizing the sardari system and advocating administrative modernization and introduction of parliamentary representation on a Western model.  Ghaus Bux Bizenjo and Gul Khan Nasir, members of the party, were expelled from the state by the Khan.  Anjum-e-Watan, organized around the Pathan residents of Balochistan, promoted the need for constitutional reforms.  The Muslim League, though a minor party limited to very few, also played an important role in the years to come.

The issue of the status of Kalat State was again raised by Ahmed Yar Khan as the British withdrawal from India neared.  Ahmed Yar Khan reiterated his well known stance that Kalat was distinct from other princely states of India as it was neither a British protectorate nor part of the Indian federation.  Through two separate memorandums submitted to the Cabinet Mission in 1946, the Khan argued that any treaty arrangement between Kalat and the British Government would ipso facto terminate with the transfer of power in British India.

The British withdrawal from India and consequent partition revived Ahmed Yar Khan’s hopes for an independent Kalat state.  The fate of British Balochistan was decided by the Shahi Jirga, which was enlarged by the representation of the Quetta Municipal Committee.  Though the Jirga voted for Pakistan, the actual results and the procedure followed became controversial with varying narratives.  The Khan of Kalat, on the other hand, managed to get a standstill agreement reached among Viceroy Mountbatten, Mohammad Ali Jinnah, Liaqat Ali Khan, and Ahmed Yar Khan.  The standstill agreement, entered upon on 5 August 1947, recognized the independent status of Kalat, but at the same time provided for the transfer of British paramountcy to Pakistan.

The Khan of Kalat declared independence on 15 August 1947 and implemented an interim constitution that provided for a bicameral parliament.  Later, when the Jam of Las Bela and the Nawab of Kharan, both constitutionally parts of Kalat, acceded to Pakistan, the Khan of Kalat also promptly signed the documents of accession to Pakistan on 30 March 1948.  Ahmed Yar Khan’s younger brother Abdul Karim went up to the mountains to wage what was later termed by Baloch nationalists as the first Baloch war of liberation and self-determination.  As the author rightly concludes, the death of the state was the birth of the nation.

The central thesis of Axmann that Baloch nationalism arose from the impact of modernity on the state and society in Balochistan stands firm on the historical facts collected by him through extensive research.  This proposition may be confronted with the argument that modernity had no far-reaching impact in Balochistan, that the society there remained primitive, and modern education was limited only to a small minority.  This criticism, however, misses the point that the initial instrument of modernity that hit Balochistan was the modern administrative machinery and Baloch nationalism originated from interaction with it.  In other words, nationalist leadership in Balochistan became familiar with modernity through their interaction with the modern territorial state.  It is, therefore, not surprising that the initial demands of the Baloch leadership pushed for administrative and constitutional reforms and criticized the prevalent sardari system.

The book under review also hints at the wavering character of the ruling tribal elite of Balochistan with regard to their national movement.  The censorship of the Kalat State National Party was an early sign of what was to appear later.  After protesting against the forcible accession of Kalat State for a few years, Ahmed Yar Khan eventually affirmed his loyalty to Pakistan.  The Khan of Kalat, commented Ayub Baksh Awan, who had been lodged in a comfortable house in the most fashionable locality of Lahore, reaffirmed his loyalty to Pakistan, asked for forgiveness, and was pardoned.  The full amount of his Privy Purse was also restored.

Umer Akram Chaudhry is a lawyer based in Lahore.  This book review was first published in the 2-8 April 2010 issue of The Friday Times (Lahore).