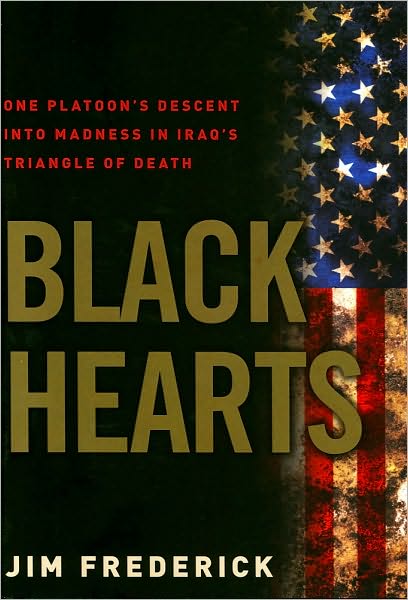 Black Hearts is not a story about your father’s army, or your grandfather’s — this is a tragic narrative of soldiers of the American empire running amok.  In recounting the rape of Abeer Janabi, a fourteen-year-old Iraqi girl, and the murder of her and her family by soldiers from the 502nd Infantry Regiment of the 101st Airborne Division in 2006, Jim Frederick offers chilling insight into the modern US Army as an occupation force.

The four infantry soldiers found guilty of the crime, Specialist Paul Cortez, Specialist James Barker, Private First Class Jesse Spielman, and Private First Class Steven Green, were members of 1st Platoon, Bravo Company, 1st Battalion, which had been assigned occupation duty in a hotly contested region of Iraq southeast of Bagdad known as The Triangle of Death.  The mission of the unit was the suppression of the local insurgency that was part of the general uprising against the US occupation of Iraq.

The duties of the US soldiers included guarding forward operating bases and convoys; manning traffic control points and overwatches; conducting routine patrols, ambushes, snatch and grabs; and raiding and searching Iraqi homes.  At the same time, they were also supposed to reach out to the local populace to “win their hearts and minds.”

Bravo Company was not up to the grueling war work assigned to it — the unit was undermanned, ill equipped, poorly led, and overextended.  The seeds of the tragedy when the four men of the 1st Platoon ran amok and murdered the Janabi family were present from the first days of the unit’s deployment.

Signs of combat stress among the troops appeared early on and unit discipline began a downward spiral almost from the beginning.  Disdain for the enemy, a psychological prerequisite for the work of occupation, soon degenerated into outright hatred of all Iraqis.  Almost three months before the murders, PFC Green, the soldier who actually pulled the trigger, openly declared his preoccupation with the idea of killing Iraqi civilians to a member of a Combat Stress team.   She diagnosed Green as suffering from Combat and Operational Stress Reaction (COSR), gave him a prescription for Seroquel, an antipsychotic drug that is also used to treat insomnia, and sent him back to his unit.  The Army considers soldiers with COSR, not as patients who need to be treated and possibly evacuated, but individuals having “normal reactions to an abnormal event.”  War work must go on.

Less than three months later, the renegade soldiers, drunk on Iraqi whiskey and hyped on hate, raped Abeer, and Green shot the entire Janabi family in order to eliminate any witnesses.  All in all, a sorry story, but, in the context of military occupation, the subtitle of Frederick’s book is an understatement — Black Hearts is not just the narrative of “One Platoon’s Descent into Madness in Iraq’s Triangle of Death” — on the political level it presents a case study of the human consequences of maintaining an empire.

The Politics of Empire in Iraq

Contrary to the assertions of many political pundits, including Frederick, the war against Iraq was not a failure.  While the stated mission of the US invasion was to insure the security of the US, depose a tyrant, and establish democracy in Iraq, the covert purpose was far less noble.  The purpose of the “shock and awe” invasion and subsequent US occupation of Iraq was to conquer that nation and reduce its influence in the Middle East, a region vital to the American empire.  This contradiction between word and deed, an insidious betrayal of the American people and the US troops on the ground, resulted in the destruction of a nation and the loss of hundreds of thousands of lives, perhaps over half a million.

Because of widespread civil violence since the invasion, the US occupation of Iraqi appears to be a disastrous outcome of a flawed strategy.  Under international humanitarian law, an occupying power, along with other responsibilities, “must take measures to restore and ensure, as far as possible, public order and safety.”  Post-invasion events in Iraq clearly show that the US policy was aimed at undermining public order and safety as part of the overall strategy of attrition.  The key US initiatives in this regard were the dismantling of the pre-invasion political infrastructure by barring from government employment former members of Saddam Hussein’s Baath Party, dissolving the entire Iraqi military and police force, and imposing an Interim Governing Council (IGC) that was designed to divide and conquer.  The US strategy of attrition worked — the Iraqi economy is in shambles and it will take decades, if it is even possible, for the people of Iraq to rebuild a viable political infrastructure to govern the nation.

The work of empire is winding down in Iraq.  That nation has been subdued, and the bulk of the US combat forces in the Middle East are being transferred to Afghanistan.  A small, but well-armed, garrison is being left behind in Iraq as insurance.  The endgame strategy of the American empire, articulated in 1997 in the Project for the New American Century, continues.

As a factor in the decision to write Black Hearts, Jim Frederick recounts a call that he got from a military attorney who had been assigned to represent one of the soldiers of Bravo Company.   The Army lawyer encouraged him to investigate the incident because: “America has no idea what is going on with this war.”

Reading Black Hearts gives one a chance to take a close and unsettling look at the human collateral damage of the US effort to sustain its empire — the terrible toll it takes on the occupying soldiers as well the citizens of the occupied country.

Richard D. Vogel is a political reporter who monitors the effects of neoliberal globalization on working people and their communities.  His website From the Left: A US Forum on Combating Globalization is at <combatingglobalization.com>.

“It’s All about Reconciliation”
Agriculture and the India-U.S. ‘Strategic Alliance’: The Deadly Danger of Monsanto, Archer Daniels Midland and Wal-Mart