Was there a golden age of the film soundtrack?  One might reach for Ennio Morricone (at least until the late 1980s) or the ’70s and ’80s records Popul Vuh made for Werner Herzog’s most memorable films, Aguirre, Nosferatu and Cobra Verde.  Even if much of the concept has gone out of ‘conceptual’ film-making and the soundtracks that accompany them, there are nevertheless highlights here and there.  We could point to David Lynch, John Carpenter or Howard Shore’s brittle and claustrophobic music for Cronenberg’s Crash (1997), or Ed Tomney’s tense and millennial compositions for Todd Haynes’ Safe (1995) as proof that film and sound can be more than whatever bland indie love-songs the studio’s marketing manager has been listening to on his iPod.  The soundtrack to Andrea Arnold’s recent Fish Tank does something interesting with the diegetic, with its muffled sounds and tinny music players — indeed, much of the film is about recorded music and its playback, from the tiny speakers that Mia dances to in an empty room to the CD player leading her to her doom in the strip-club.

If we expand our cinematic categories a little, we can point to complex figures like Walter Murch, a ‘sound designer’ among other things, rather than a simple composer or hit song provider for the charts (film soundtracks are often simply understood as ‘secondary usage’, providing producers with additional sources of income).  In early silent cinema, pianists were hired to drown out the mechanical whirring of the projectors and ramp up emotion; Murch revisits the noise of the machine in the famous scene in Apocalypse Now where helicopter blades become indiscernible from ceiling fans.1

But, for the most part, an ‘original soundtrack’ is the misnomer it always was, being neither the composite track of the film (the dialogue, the sound effects, the music) nor original, being comprised of whichever three-minute songs the studio/record label partnership wishes to promote.  The apex, or really nadir, of this trend, which stretches all the way back to the beginning of the marketing of film soundtracks in the late ’40s and ’50s, was reached in Michael Winterbottom’s 9 Songs (2004) in which a boring couple have boring (but real!) sex to boring (but real!) songs by Elbow and Franz Ferdinand.  The pop song as unifying revelation of a shared humanity features in Magnolia (1999), as the main characters coincidentally start singing Aimee Mann’s ‘Wise Up’, an inverse tribute of sorts to R.E.M’s video for ‘Everybody Hurts’, in which the song is a backdrop to the inner thoughts of bored car passengers, who ultimately get out of their vehicles and unite in a kind of mawkish tribute to collective misery.  Music unifies, levels: it is essentially human.  If there was ever a different time when the machine instead was integrated and posed as a question for cinematic sound, it could well have been the ’80s, in films like Assault on Precinct 13, The Running Man and Terminator, dystopian visions in which the future sounded as synthetic as the threats that might yet come to menace it.

As we move into a period we could characterise by ‘a revenge of the visual’, with 3D films increasingly regarded as the only thing that will entice people from their mini-cinemas at home, cinema music is increasingly modelled on one of two forms: the pop song iPod playlist or sub-John Williams gloopy orchestral oozing (Williams recently composed a short orchestral piece ‘Air and Simple Gifts’, referencing Aaron Copland, for Barack Obama’s inauguration).  If every big-budget soundtrack starts to sound like Jurassic Park or Wagner without the quiet bits, that’s probably because it is.  Adorno once perceptively claimed that most films ‘are advertisements for themselves’.  Trailers are thus the truth of the film for which the film is the advert.  Length becomes a secondary question.  It comes as no surprise then to learn that trailers often use music from previous hit films as their soundtrack to create a pre-existing sense of familiarly.2  When Adorno in ‘Commodity Music Analysed’ (1934-40), speaks of ‘archetypal cinema music’ (‘The birth of the Wurlitzer from the spirit of Faust’ as he puts it), he argues that it is this need for familiarity that characterises much music for cinema.3  The musical means for covering over the sounds of the whirring projector were prepared by a pre-existing proclivity for a certain mix of sentiment and innovation:

It is doubtless true that towards the close of the nineteenth century the music that swept people off their feet did so because it combined drastic ideas with conventionality.  In so doing it satisfied the demands of the cinema before cinema was invented.4

Commercial cinema’s desire to block out the machine, to smother the jolts and gaps between movement means that music is often seen as a kind of empathetic patch, a device to pretend that the frames and hyper-technicality are always put in the service of larger, smoother, humanitarian wholes.  ‘Mickey-Mousing’, the practice of exactly matching music to image, may be something we associate with animation from half a century ago, but this often comic self-consciousness of the relation between the sound and image is far more radical than the surreptitious manipulation of familiar emotions that much of today’s cinematic music pursues.5  But mainstream cinema remains one of the few places where sounds and music could potentially afford to be brave: the tracks that Kubrick used for 2001: A Space Odysessy originally as a temporary placeholder for the real score, placed more Ligeti in more homes than a thousand Radio 3 retrospectives would ever have done.  Similarly, as Alex Ross notes:

On the weekend of February 19th, and for some weeks thereafter, millions of Americans will enjoy a program of Giacinto Scelsi, John Cage, Lou Harrison, György Ligeti, Morton Feldman, Krzysztof Penderecki, Alfred Schnittke, Nam June Paik, Ingram Marshall, and John Adams.  This fairly bold lineup of composers, which would cause the average orchestra subscriber to flee in terror, appears on the soundtrack to Martin Scorsese’s film Shutter Island.6

Academic terminology has taken something of a strange optical turn in recent years with ‘visual culture’ and ‘visual theory’ becoming catch-all disciplines that cover elements of cultural studies, art theory and critical theory.  This is not to say that there aren’t people working within this areas on sound, music or sonics, however.  Take for example Susan Schuppli’s work on media machines that investigates, among other things ‘the missing or ‘silent’ erasure of 18-½ minutes in Watergate Tape No. 342′ or Steve Goodman’s work on sonic warfare.7  But we have to wonder why this stealthy academic privileging of the visual over other senses has come about. 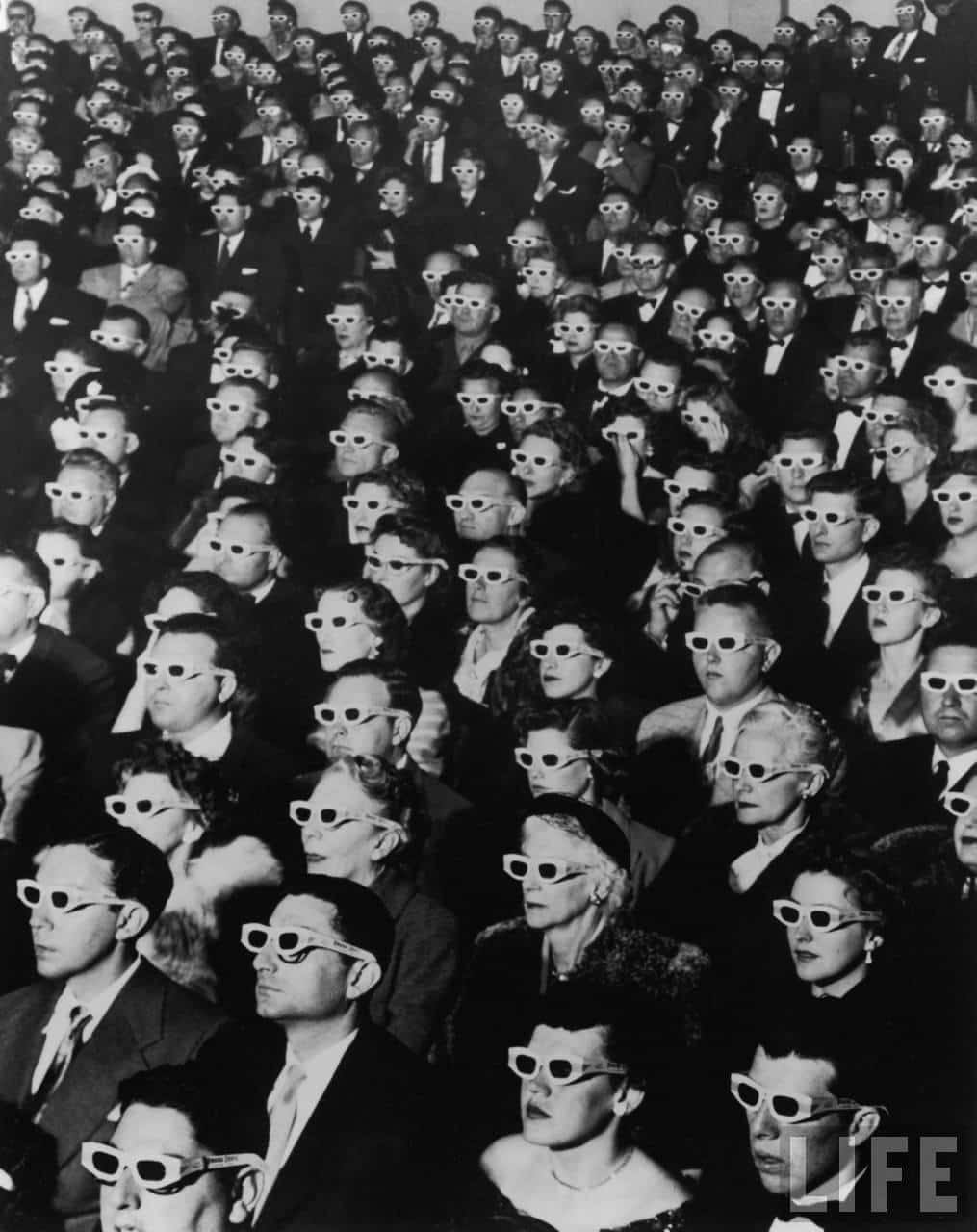 It is a little as if the ‘attempt to interpose a human coating between the reeled-off pictures and the spectators’ that Adorno and Eisler recognised was the purpose of most film music has infected the entire study of cinematic culture.8  The tacked-on role of the composer for cinema that Adorno and Eisler deplored, a kind of last-minute annoyance from the standpoint of the budget, has become the occlusion of the sonic in the contemporary understanding of culture in general — the reactionary stereoscopic tendency, a kind of re-visting of the 1950s in the 2010s, proving those covers of Debord’s Society of the Spectacle correct.  The photo, J. R. Eyerman’s ‘3D glasses’ taken in 1952 for Life, was captured at the screening of ‘Bwana Devil’, the first full length colour 3-D motion picture, a film about British railway workers in Kenya being eaten by lions.  Its tagline was ‘A lion in your lap!  A lover in your arms!’  As Cameron’s Avatar demonstrates, the closer you get to a pure celebration of vision, the less the music and the script matter; a comparison of the first 3D film and the biggest most recent version may well be worthwhile less for their technical similarities but for the similarity of their colonial content.  James Horner’s soundtrack for Avatar — a mix of dramatic timpani rolls, ambient environmental lift-music and belligerent folderol (from ‘Pure Spirits of the Forest’ to ‘Gathering All The Na’vi Clans for Battle’), plus Leona Lewis — is aural soup for muddy and dubious narration to drown in.  Where once the music may have covered over the whirring of new and frightening mechanisms, now the soundtrack disguises little more than the banality of the script — plots which nevertheless seek to assure us of our fundamental intentional human goodness, even if everything we do is actually wrong and vicious.

As Esther Leslie puts the relation between music and image in Adorno’s conception of cinematic music:

Adorno wrote of how in film, music lends the cinematic vision a veneer of humanity, a semblance of liveliness, by masking the whir of the projector in the background, the proof that we exist under the sway of mechanization. Without it, we are blankly exposed to our counterparts, the two-dimensional shadows that cavort on screen.9

Increasingly film music seeks to lend humanity itself a veneer of the cinematic, an eco-friendly soundtrack to dampen the fears of the antagonisms and asymmetries of everyday existence.  Coupled with the painful loudness of Dolby surround sound and the brutal atonality of sounds of cinematic violence — explosions, car crashes, gun shots — the modern cinematic ear is trained for nothing less than the sickening, yet omnipresent, combination of cruelty and fake humanism that characterises contemporary life.

1  ‘As soon as movies lasted more than a couple of minutes, owners of nickelodeons hired pianists to drown the noise of the hand-cranked projectors and give an extra emotional dimension to the celluloid product’ (Philip French, ‘From the Sound of Silents to Hollywood’s Golden Composers’).

2  See here for a list of frequently used tracks across films: www.soundtrack.net/trailers/frequent/.  Thanks to Daniel Trilling for this point, and for his comments on the piece more generally.

5  See the rather smart parody of both Avatar and Mickey Mouse in a recent episode of the Simpsons (2115), when Bart and Homer see a 3D version of an Itchy and Scratchy film called: ‘Koyaanis-Scraachy: Death out of Balance’.

7  For more on Susan Schuppli, see, www.uwo.ca/visarts/faculty_staff/susanschuppli.html.  For more on sonic warfare, see Steven Goodman, Sonic Warfare: Sound, Affect and the Ecology of Fear, London: MIT, 2009.  There is a description at mitpress.mit.edu/catalog/item/default.asp?ttype=2&tid=11890.