There is an embarrassing giddiness in the religious studies world today.  With our new mantra in hand — the new “salience” of religion — we, both scholars of religion and other self-appointed spokespersons for religion, feel licensed to instruct the world on the importance of religion.  We are suddenly relevant again.  Or so we think. 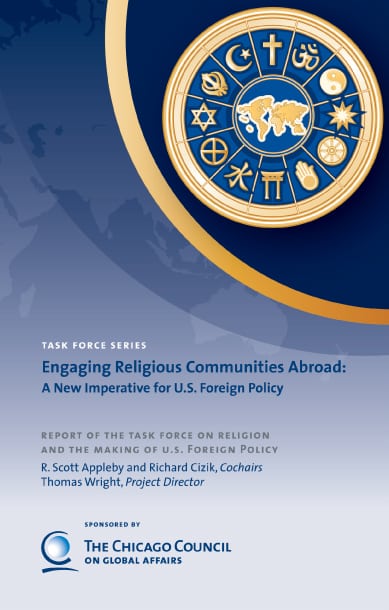 If there is an opportunity for religious studies today, and my own view is increasingly that this is an opportunity more for listening than for speaking, the Chicago Report suggests the likelihood that this opportunity will be misunderstood and misused.  Religion today is an immensely complex phenomenon.  And there are many who speak in its name.  It is far from clear that there is any sense in which generalizing about religion is useful as a political matter — or, for that matter, that the United States government should be spearheading a new reformation.

The Report announces that: “Religion is now playing an increasingly influential role — both positive and negative — in the public sphere”; that “Extremist groups also use religion”; and that we should support “those doing good, while isolating those that invoke the sacred to sow violence and confusion.”  It recommends that the National Security Council initiate a new strategy in American foreign policy.  The goal of this new strategy would be to promote American interests through engagement with constructive religious actors, engagement that would distinguish good people of faith from bad ones and deliberately marginalize religious extremists, all in the name of American security.  The Report knows what is constructive and it knows how to divide the good guys from the bad guys — that is, vital, autonomous, authentic, credible, and legitimate religion, and genuine religious freedom, from that which is extreme, destructive, and not accepting of “pluralism, freedom, and democracy.”

The record is not very good in this respect.  Religion is powerful, when it is, because it embraces the full spectrum of human activity.  Distinguishing the good from the bad has often divided religious insiders, as well as outsiders.  Furthermore, the United States government has long dealt with “religious actors” at home and abroad who do not embrace “pluralism, freedom, and democracy.”  American governments have been active sponsors of proselytization in the name of civilization in the case, for example, of Native Americans and Mormons, as well as supporters of both regimes and rebels who are motivated by religious ideologies that do not support “pluralism, freedom, and democracy,” as, for example, Israel, or the mujahideen who resisted Soviet rule in Afghanistan.  There is no reason to think that it will get better.  Nor do we have any reason to believe that the ambitious and utopian program for the reform of religion proposed by the Chicago Report, and expressed in this astonishing prediction — “Over time, as religious communities play even greater roles in the positive transformation of their societies, the importance of vital and autonomous religious agency will become more visible, pronounced, and politically consequential” — can, or even should, be accomplished, or that the National Security Council is the man for the job.

Most importantly, perhaps, for a report about religion, there is not much religion in this report.  One searches in vain for anything new about religion, beyond a now familiar post-9/11 account of religion being a force for good and ill, an account that is supported by examples that are so hackneyed as to be not much more than scapegoating.  For example, in discussing the best and worst of religion — obviously seeking a non-Islamic example — the Report uses Haiti as an instance of the “best and worst of faith-based efforts”:

A classic example of the wonders and ills was the catastrophic earthquake in Haiti in January 2010.  Eighty-one U.S. charities, including faith-based organizations, raised or pledged $611 million for relief efforts within three weeks of the devastating quake, while legions of development personnel worked in the midst of great suffering to provide food, medicine, and shelter.  Meanwhile, a Baptist group was implicated in the kidnapping of children, which raised local suspicions and tainted the immense, positive contribution of the faith-based development effort.

This is the best and worst of faith-based efforts in the world?  Nowhere in the report is the massive sex abuse scandal in the Catholic Church mentioned.  Surely, that scandal reflects the worst far more than the misguided but well-intentioned efforts of a few would-be rescuers of children.  But in this report, the Catholic Church is one of the good guys.  As for women’s rights, they are deliberately relegated to second place.

This report is also oddly inconsistent about whether religion is an individual matter or a collective matter.  At times, the word religion seems to refer to the familiar, modernist, progressive, American, protestant form that is now widely documented and described as the religion of the first amendment.  But, curiously, a footnote defines religion for the purposes of the report in a quite un-American way:

We define religion as an established system of belief, practice, and ritual based in a collective affirmation of a transcendent or otherworldly reality that encompasses and gives ultimate meaning to earthly existence . . . we are particularly focused on multigenerational, transnational religions organized around institutions, leaders, and disciples or followers — adherents who normally number in the millions worldwide, but who are supremely local in their influence and impact.

It seems that disestablishment is good policy at home, but that establishment will be the policy abroad, because “an established system” of “multigenerational” institutions with “leaders” and “followers” is the way to control people and the NSC needs formal actors to engage with.

Interestingly, the question of established religion reveals a division among the Report’s authors.  One of the major recommendations in the Report is the following:

Clarify the Applicability of the Establishment Clause.  The Task Force calls upon the president of the United States, advised by executive offices and agencies who have studied the problem, to clarify that the Establishment Clause of the First Amendment does not bar the United States from engaging religious communities abroad in the conduct of foreign policy, though it does impose constraints on the means that the United States may choose to pursue this engagement.  Such clarification would serve as a major “next step” in the president’s post-Cairo follow-up.

A footnote to this recommendation refers the reader to a dissent and a response to the dissent appended to the report.  The dissenters, Jean Bethke Elshtain, Thomas Farr, William Inboden, David Neff, and Timothy Samuel Shah, announce that they “believe that in the absence of compelling evidence to the contrary (evidence which, as the report demonstrates, does not now exist), no administration should impose constraints on American foreign policy that are imagined to derive from the Establishment Clause.”

The responders, Frederick Mark Gedicks, Kent Greenawalt, Abner Mikva, George Rupp, and David Saperstein, while embracing the definition of religion in footnote 7, but perhaps concerned about the broader implications of any suggestion that the Constitution has no authority beyond the territorial borders of the U.S., apparently also felt constrained to announce categorically that “It is beyond question that all branches of the U.S. government must act in accordance with the Constitution when conducting American foreign policy,” and, further, that “There is no reason to believe that the Establishment Clause is an exception to this requirement.”

The First Amendment to the U.S. Constitution begins, “Congress shall make no law respecting an establishment of religion or prohibiting the free exercise thereof. . . .”  Since 1947, the Supreme Court has understood the Amendment to have been incorporated through the Fourteenth Amendment due process clause, so that it is now applicable to state governments as well as to the federal government.  It is broadly understood today to prohibit the privileging by the governments of the U.S. of one religion over another, and to prohibit government funding of religious worship and proselytization.  As the report mentions, the U.S. Supreme Court has not expressly ruled on the applicability of the establishment clause to foreign policy.  One could speculate on what this Court might do if asked, particularly after its decision in Hein v. FFRF; but when combined with the definition of religion announced in footnote 7, the view of the dissenters seems to be that those prohibitions should not guide American policy abroad.  American policy abroad should discriminate among religions, and should fund and promote the religious activity that it finds good and in the best interests of the U.S.

While periodic, and not altogether successful, efforts at disestablishment have produced a distinctively American style of religious governance — one that is not widely shared throughout the world — it is difficult not to see the adoption of an explicitly establishmentarian position by American foreign policy makers as opportunistic and naïve.  Established religion is, by definition, not accepting of “pluralism, freedom, and democracy.”  The sacred and the secular are deployed in the report with a startling slipperiness.  As Beth Hurd says in her companion piece, a peculiarly toxic form of “American exceptionalism, and a particular notion of American religious freedom and American power, are sacralized in this report, such that they are, in the words of the report, lending ‘a sacred aura and intensity to disputes and campaigns that also have significant secular dimensions.'”

At the same time, “secular’ policies of the U.S. are exempt from responsibility for the creation of violence.  With Beth Hurd, and with Rami Khouri, at The Daily Star, I believe this Report says more about “us” than it does about “them.”  Khouri writes:

The Chicago report is an important sign of how sensible Americans continue to seek a more complete understanding of the world they live in, and try to forge better policies to navigate that world.  But the process reflects the weaknesses in American government policies as a whole in that it exaggerates the role of religion as a distinct independent actor or force, and does not factor into the resurgence of religiosity the stimulus provided by American policies in the Arab-Asian region (and Israeli policies in the Middle East).

This report simply dresses up American political realism in a religious garb.  It both misses the real story and shamelessly exploits the politics of fear to support American interests.

It is unquestionably the case that religion seems suddenly to be in everyone’s mouths.  There are a number of causes for this, in my view, both historical and epistemological.  In part, religion as the other of the enlightenment returns in philosophical circles as good to think.  Religion returns as a useful label for a range of practices that exceed the individual — to describe communal and cultural ways of being in the world, as well as material and incarnational accounts of human life.  Politically, too, religion is a useful catchall for resistance to various oppressive regimes, the state, the west, the market, science, globalization. . . .  But these issues are beyond the scope of this piece — and beyond the imagination of the report.

Winnifred Fallers Sullivan is Associate Professor of Law and Director of the Law and Religion Program at the University at Buffalo Law School of the State University of New York.  This article was first published by The Immanent Frame, a blog sponsored by the Social Science Research Council, on 22 March 2010; it is reproduced here for non-profit educational purposes.