The ongoing political crisis in Thailand has been capturing headlines for some time now, and now even appears to be heading towards some kind of climax.  This political instability reflects more than the resistance of the existing establishment to the increasingly vociferous demands of those who have been marginalised from most of the benefits.  It also reinforces the significance of (and the need for) democratic legitimacy in a developing country such as Thailand, despite all the known problems with its electoral process.

But the purely political is not all that underlies this current crisis.  Indeed, it could be argued that the economic underpinnings of this political crisis are the more significant forces propelling the actions of the anti-government protestors.  This reflects the socio-political results of more than a decade in which the neo-liberal economic model, which still drives the policy making of the elite, has been fundamentally exposed among the people.

The conflict between the current Thai government (as well as those elements of the establishment that directly and indirectly enabled this particular political grouping to rule) and the wide spectrum of anti-government protestors is not simply about certain political processes or about individuals like Thaksin Shinawatra, the exiled former Prime Minister.  Rather, it is substantially about economic policy.  As Pasuk Phongpaichit and Chris Baker have shown in their excellent book on Thaksin, he was (and remains) a larger-than-life figure with only too lifelike faults, which have ranged from blatant nepotism to megalomaniac attempts at stifling democracy.  So the support for his return is not only (or even necessarily) because of the craving for a strong leader, but much more due to the perception that the economic strategies followed by his government brought at least some relief to the people.

The continued popularity of Thaksin among the peasants and otherwise unorganised workers is largely because of what the Thai elite sniffs away as “populist policies”.  This term is a favourite among chattering classes across the developing world, used to denigrate any economic policies with minimally redistributive impact from the rich and middle classes to the poor.  In Thaksin’s case, these included providing peasants and small businesses with access to institutional finance, increasing the share of rural Thailand in public expenditure, providing fiscal transfers down to the village level in the form of untied funds to be used according to the preferences of local communities, and such like.  While these did not contradict or even challenge the basic neo-liberal framework within which corporate industry continued to be favoured, they share some of the spoils of economic growth with those who had hitherto been excluded.  They were certainly popular policies, and they played a role in giving to Thaksin and his various political formations a degree of legitimacy among ordinary people that is still unmatched in Thailand.

While many of Thaksin’s actions in power (and his own undemocratic tendencies) certainly sowed the seeds of his decline and fall from grace, the coup and various other actions of the Thai establishment could also be seen as the empire striking back.  The subsequent inability of the government to capture the political imagination of the masses, or even to achieve basic legitimacy despite trying to continue with some of Thaksin’s economic policies, may be due to the growing evidence that even such “populism” is no longer economically sustainable in Thailand.

To understand this, and also to begin to comprehend the extent of general dissatisfaction with the economic regime, it is useful to examine the relationship between economic growth and employment (which determines the material conditions of the bulk of the Thai population, even the peasantry).

Chart 1 shows how real GDP and total employment have moved over the past twenty-five years in Thailand.  Remember that Thailand, in common with many developing countries, is generally a labour surplus economy engaged in an uneven and unbalanced process of industrialisation.  Yet it is evident that aggregate GDP growth rates have run far ahead of aggregate employment growth, even when the measure of employment includes (as it does here) all form of self-employment, casual work and even part-time work. 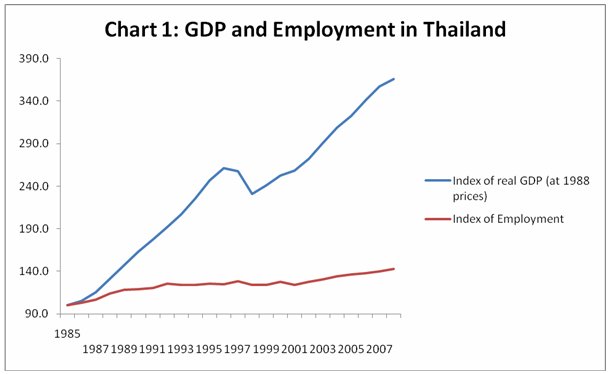 The period of the Asian crisis occasioned a drop in GDP as well as in aggregate employment, but the subsequent sharp recovery in GDP did not translate in more rapid employment growth, which has tended to stagnate.  This pattern is confirmed by Chart 2, which shows annual rates of growth of aggregate employment as well as the unemployment rate.  Employment growth has been volatile within a narrow range, and indicates a trend decline compared to the 1980s.  It was negative at several points in the 1990s, not only in the crisis years, and zero in 1999 and again in 2001, reflecting the effects of the global recession.  Subsequently, despite more respectable aggregate GDP growth, the peak rates of employment expansion have been less than 2.5 per cent.  Unemployment rates fell somewhat during the 1980s boom but rose again after the crisis and since then have displayed volatility around a higher trend.  While these rates may appear low, they are part of an institutional structure that offers no social protection to the unemployed, where the inability to find paid work is therefore reflected in more disguised unemployment in agriculture and petty services. 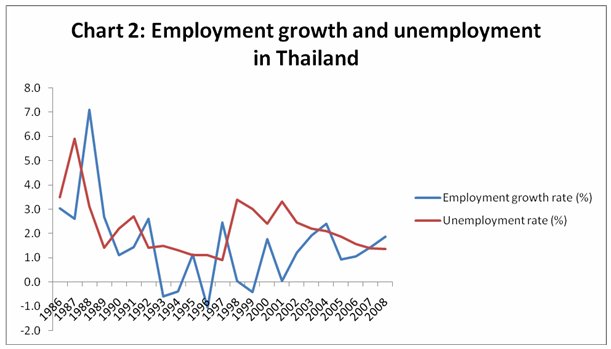 The pattern is a recognisable one.  Many developing countries, including those perceived to be the most successful in terms of output growth rates, exhibit this form of jobless growth.  This reflects two general tendencies: a shift in production structure across and within sectors, whereby income expansion is associated with demand for goods and services produced in more capital-intensive conditions without generating demand for labour-intensive goods and services; and the associated technological and organisational changes that improve labour productivity.

This pattern is seen once again in the incidence of jobless growth in the formal sector, described in Chart 3.  Both in terms of number of establishments and number of workers, termination of work contracts was relatively low in the economic boom that preceded the crisis.  However, layoffs zoomed up during the Asian crisis of 1997-98, and have stayed high in the entire subsequent period even though the economy supposedly started booming.  In fact, the number of establishments adversely affected has grown faster during the 2000s boom than in the previous crisis. 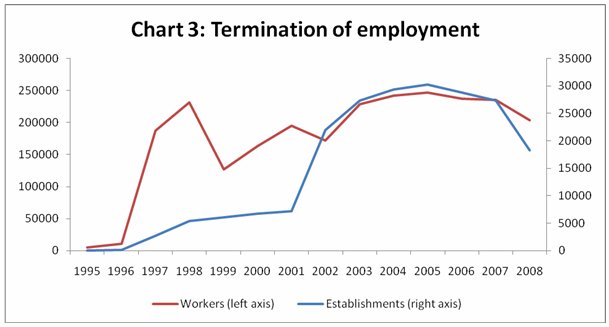 Overall, this means a labour market in which workers are clearly worse off, since both external competitiveness issues and internal dynamics have dictated that demand for labour does not keep up with supply.  This reduced bargaining power is indicated by the fact that real wages — which were drastically affected during the crisis of 1997-98 — continued to fall even during the recovery, and then have recovered only slightly.  In 2008, real wages were only 5 per cent higher than their level of 2000, while labour productivity had increased by 22 per cent. 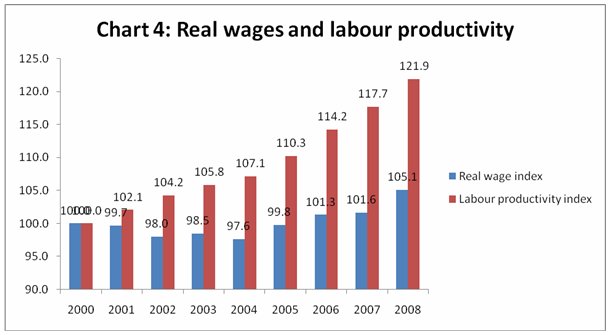 Of course these are aggregate figures, and the sectoral pattern is likely to be more complex.  But they indicate an economy in which the distribution of national income is clearly shifting away from workers to those who receive profit, rent and interest.  The reduced bargaining power of workers is inevitably part of the reduced bargaining power of the peasantry, from whom the ranks of new workers are generally drawn.

This broader context of worsening income distribution is essential to understanding the current political tensions in Thailand.  The anger of the anti-government protestors is fundamentally related to this process, and Thaksin is appreciated by this group only because he showed that it is still possible at the margins to improve the lot of the poor using fiscal and monetary policies.