Markets can be irrational, as Keynes famously pointed out, and the Eurozone/Greek crisis is a classic example.  “The markets” for months have been demanding more blood from Greece, as the financial press has continuously and often unquestioningly reported: more commitment to spending cuts, tax increases, and “procyclical” policies that the bondholders, EU authorities, and the IMF have also demanded.  As I noted, this just pushes Greece deeper into recession, and doesn’t even make it more likely that they will pay off their debt in full.  The same is true, to varying degrees, for the other weaker Eurozone economies: Portugal, Ireland, Italy, and Spain.

So why do they do it?  I have been asked that question many times recently, and of course I can’t speak for the EU authorities or the IMF, which in this case is subordinate to the former.  The most likely explanation is one proposed by George Soros nearly a decade ago to explain such attitudes during the Argentine crisis: punishment.  The Greeks (and others) must pay for their governments’ “profligacy,” lest others be tempted to run up unsustainable debt.  “The markets” and the authorities who follow their dictates don’t particularly care about the injustice of punishing the general population for decisions made by a few.  But do they care if they are making the economy worse and possibly reducing the chance that the bondholders get paid in full?  Or weakening the whole Eurozone economy?  Or possibly worse, exacerbating “systemic risk,” as we saw in the wild ride of worldwide stock markets?

With regard to the latter, it was probably the following weekend reversal of position from the European Central Bank, more than the trillion-dollar fund that was created, that calmed the markets.  As Bloomberg reported:

The European Central Bank said in a statement it will intervene in government and private bond markets “to ensure depth and liquidity in those market segments which are dysfunctional,” and central banks in Germany, Italy and France began buying government bonds today [May 10, 2010].  The ECB restarted a dollar-swap line with the Federal Reserve. 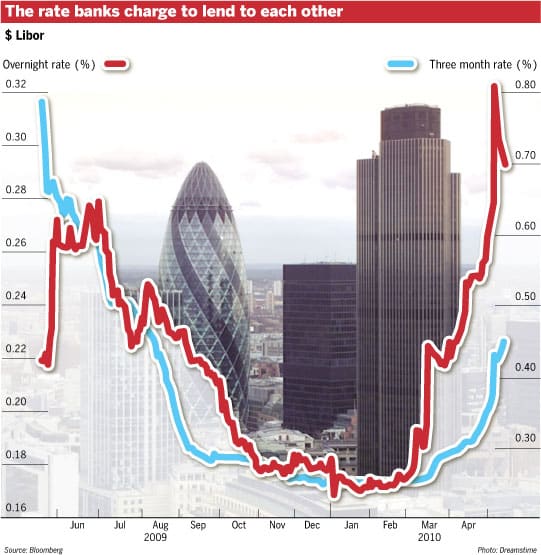 It was the ECB’s initial refusal to commit to exactly this that launched a panic in worldwide markets, by driving up interest rates for interbank and other loans in Europe.  It is difficult to understand the ECB’s willingness to play this game of brinkmanship as anything other than ideological.  The Eurozone’s projected inflation (consumer price index) for this year is 1 percent, and 1.5 percent for next year.  Are they really afraid that these interventions to ensure liquidity will cause too much inflation in the Eurozone?

Mark Weisbrot is co-director of the Center for Economic and Policy Research, in Washington, D.C.  He received his Ph.D. in economics from the University of Michigan.  He has written numerous research papers on economic policy, especially on Latin America and international economic policy.  He is also co-author, with Dean Baker, of Social Security: The Phony Crisis (University of Chicago Press, 2000) and president of Just Foreign Policy.  This article was first published in the CEPR blog on 13 May 2010 under a Creative Commons license.