Until recently, the discussion on global imbalances focused on the current account deficit of the US and the current account surplus of China, making this a bilateral rather than a multilateral problem.  As a result, the process of rebalancing was seen as involving adjustments in either or both of these countries, and not so much elsewhere in the world.

In the case of China, policy recommendations include an appreciation of its currency or an expansion of domestic consumption to reduce the excess of savings over investment.  In the case of the US, the commonly heard suggestions include a limited but gradual devaluation of the dollar and curtailment of government spending after the crisis is over.

Among the many issues that such an argument ignores, two are particularly important.  The first is that the symptoms of imbalance are more widely distributed than assumed here.  This fact tends to be ignored because of the high share of the US in global deficits.

Compare this with the distribution of surpluses earned by a much smaller set of 55 countries.

China, which has the largest surplus on its current account, contributes 22 per cent of the total surpluses of these countries, which is much smaller than the 50 per cent of the aggregate deficit notched up by the US.

Further, Germany, which followed China in terms of the size of its current account surplus, contributed 15.8 per cent of the total surplus of these countries, making the distance between the two much smaller than that between the top two deficit countries.

Finally, as we move down the league table for the top 5 surplus earners (China, Germany, Japan, Saudi Arabia and the Russian Federation), their combined share moves up to 61 per cent, which is not as far short of the 73 per cent contributed by the top five deficit earners.  The degree of concentration of deficits is substantially more than the concentration of surpluses.

Thus, if the adjustment to ensure global rebalancing has to be undertaken by the surplus earners, then more than one country will have to be involved, and an excessive emphasis on just China’s currency ‘undervaluation’ or high savings rate may not offer the appropriate set of solutions.

This is not to suggest that China should not aim to rebalance its domestic economy by reducing the savings rate and increasing the share of consumption in GDP or by reducing the role of exports and expanding the role of domestic demand in driving growth.  It is merely to point to the fact that rebalancing is a more generalised requirement than emerges from the controversy surrounding the China-US relationship.

The second problem that the China-US focus ignores is the role of a peculiar form of uneven development that the process of globalisation has involved.  It has for long been argued that technological changes have (i) segmented production processes and facilitated the dispersion of individual segments to appropriate locations; (ii) reduced the costs of transportation and therefore the importance of transport costs in locational decisions; and (iii) cut communication costs permitting the centralised management of globally distributed production facilities.

By the 1980s, this created the basis for the truly global firm.  It only needed trade liberalisation, tariff reduction and the removal of controls on the free movement of capital, for this potential process to come to fruition.  Once these measures were adopted in adequate measure, capital and technology flowed to the most appropriate locations, though agglomeration effects ensured that few countries emerged as favoured destinations.

The fact that in today’s globalised world capital and technology are freely mobile across borders while labour is not has resulted in the targeted location of capacities geared to production for global markets in a selected (and changing) set of countries, to take advantage of cheaper labour costs and other locational benefits.

China, in recent years has been the most popular among such destinations.  It has also been a location where domestic firms imported technology and established capacities producing for global markets.  Not surprisingly, it has recorded a rapid increase in exports and rising trade and current account surpluses.

However, extremely large current account surpluses are a relatively recent phenomenon in China (Chart 3), suggesting that concealed flows of capital disguised as export revenues and remittances rather than just exports from relocated production could play a role in explaining the recent surge.

Further, since export production is based on best practice technology and is often in the nature of penultimate stage production characterised by low value added, the employment gains from this expansion of production are limited.  This perpetuates the low wage environment that feeds the process of relocation.

The point to note, however, is that low-wage developing countries like China are not the only beneficiaries of globalisation.

In Europe, after integration, Germany, with its rapid rates of innovation and technical progress and reserves of relatively cheaper labour garnered through the process of unification, has been able to flood Euro zone markets with its exports.

As a result, many European countries have been increasingly relying on construction and services to sustain growth, since, being a part of the Euro zone, they cannot face German competition by making their exports cheaper and imports more expensive through a devaluation of their currencies. 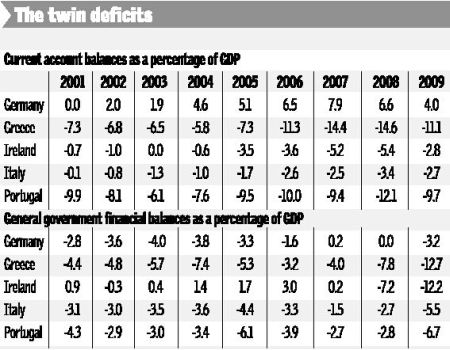 For some of these countries, ensuring growth has often required undertaking large public expenditures that are not easily funded with tax revenues given the absence of adequate sources of revenue in the sectors producing goods.  Deficits on the budget and the current account are therefore the norm (Table).

Here again, uneven development among countries that are members of the European common market is responsible for a situation where there is a substantial degree of regional imbalance, which too is a part of the global imbalance.

Germany accumulates surpluses, while “backward” members of the Euro zone accumulate deficits.  Yet nobody talks of Germany resorting to rebalancing adjustments, other than exporting capital and providing financial support to European countries facing economic difficulties.

Indeed the export of capital by Germany may have had the ironic effect of adding to the propensity for deficits in some of the recipient countries, by pushing up prices in these countries.

Even though a country within the Euro zone cannot experience a change in nominal exchange rates, real exchange rates can diverge because of relative prices.  This is precisely what occurred in Greece, Spain, Portugal and Italy, for example, and led to the situation whereby they are seen as relatively less competitive today.

The problem obviously is not the undervaluation of the German currency, but the inability of countries that are members of the Euro zone to devalue their currencies in order to remain competitive vis-à-vis German exports.  Rebalancing here requires restoring growth dynamism in the European periphery.  If this is to be done without German help, it may require exit from the euro and a greater focus on building capacities to cater to the domestic market.

Opting instead for austerity, as Greece, Spain and Portugal are threatening to do, would only worsen the problem of the fiscal deficit and undermine the ability of these countries to restore their competitiveness in the medium and long term.

Since exit from the euro would involve extremely painful adjustments with no guarantee of success, attention in Europe is focused on recycling German surpluses to benefit its less-developed European neighbours by allowing them to purchase more German goods.  But so long as these are flows involving repayment commitments, this process is not sustainable.  This is what the debt crisis in Greece makes clear.  What is needed is a set of unrequited flows or German grants-in-aid amounting to a European style Marshall Plan.

A similar logic applies perhaps in the Chinese case as well.  Chinese grants to poorer countries in Africa, Asia and Latin America can help sustain demand for US goods, which would ensure that China’s own dependence on US markets is not disturbed, till China is able to redirect its development from one substantially dependent on exports to one based on the domestic market.

But adopting such a strategy requires a drastic restructuring of the development strategy that is being currently pursued.