. . . Public debt levels as a share of GDP declined substantially in the Latin American region during the five years preceding the great global crisis of 2008 and 2009.  Data available for the largest seven countries in the region (LAC-7)1 show that the ratio of total public debt to GDP fell from 53 percent of GDP in 2003 to 32 percent in 2008, reaching the lowest level since the late 1990s, when the Asian and Russian financial crises wreaked havoc on financial stability in many parts of the emerging world, including Latin America.  However, the declining trend was partially reversed during the peak of the crisis.  In 2009, average ratios of public debt to GDP in the region reached 36 percent, approximately the same level as in 1998 (Figure 1).

Despite the increase in public debt ratios during 2009, debt composition has continued to shift towards domestic debt.  Since the late 1990s, there has been a steady increase in the share of domestic vis-à-vis external debt.2  Figure 2 shows that domestic debt now accounts for approximately 63 percent of total public debt in LAC-7, almost 13 percentage points higher than in the year 2000. 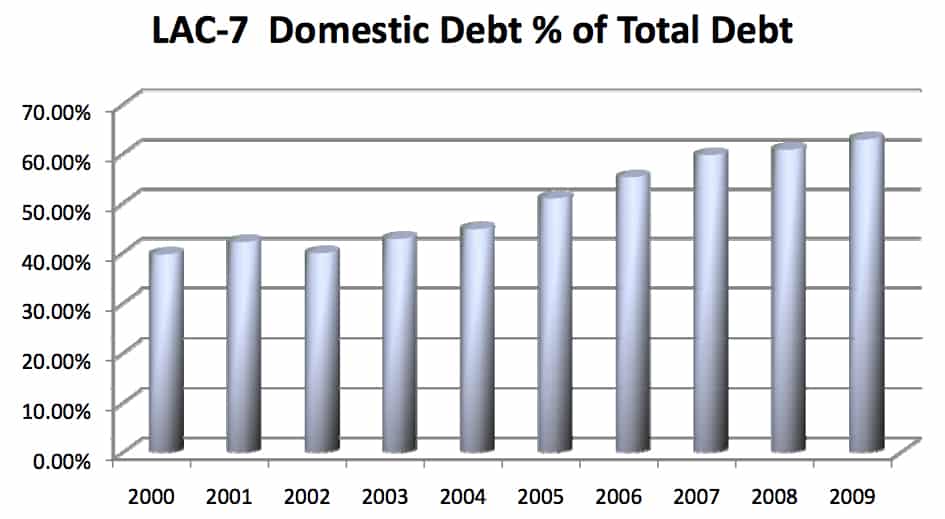 This change in turn has implications for the currency composition of debt.  Unlike external debt, which is issued predominantly in foreign currencies, domestic debt includes a greater share of local currency (IDB, 2007).  Consequently, as shown in Figure 3, the ratio of foreign currency debt as a share of total public debt has decreased steadily from 64 percent in 1997 to 37 percent in 2009.  Furthermore, the ratio for 2009 is the same as in 2008.  This suggests that not even the cheap financing in US dollars available amidst the unprecedented injection of dollar liquidity into financial markets by the Fed since the outbreak of the crisis seems to have persuaded debt managers in the region to increase borrowing in foreign currencies.  The unchanged ratio further suggests that much of the increase in the financing needs observed during 2009 has been satisfied through domestic-currency issuances in local markets.

. . . Before the beginning of the great crisis of 2008/2009, it could be conjectured that Latin America’s improved debt composition resulted in part from the highly favorable external environment that the region faced during the preceding expansion phase of 2002 to 2007:3 it is easier to issue debt at longer terms and fixed rates when interest rates are expected to fall, and to issue in domestic currency when the currency is expected to appreciate.  The shift towards “safer” forms of debt in the region coincided with a phase of historically low international interest rates and abundant global liquidity.  Global investors were searching for relatively high yields, and emerging market debt instruments of all kinds provided attractive investment opportunities.  Nevertheless, if expectations regarding the direction of interest rates and the exchange rate changed, adjustments in debt composition across the abovementioned dimensions could tilt towards riskier debt very quickly.

Those expectations did change as the financial crisis intensified in the last quarter of 2008.  The collapse of Lehman Brothers in September 2008 marked the beginning of a phase in the global crisis in which international and financial conditions suffered a severe deterioration.  For the region it marked an abrupt end to the expansionary cycle.4

The good news is that the available high-frequency data for LAC-7 countries show that debt composition did not change significantly during the global financial crisis.  This is remarkable, as experience with past episodes of global financial duress suggests that debt composition can very quickly mutate into more precarious structures.5  However, part of this success must be attributed to the fact that the duration of the crisis — at least in regard to the financial stress felt in the region — was relatively short-lived.

The financial stress began to recede in the second quarter of 2009, and by the end of the year the financial markets appeared to have recovered a sense of normalcy.  The average spread for sovereign debt instruments issued by LAC dropped from 914 basis points in October of 2008 to 375 in December 2009.  In all countries in LAC for which data are available, spreads have dropped considerably through December, and in most cases they are currently at levels only slightly above those prevailing before the crisis.

If the effects of the global credit crunch had turned out to be more persistent for the region, the story could have been different and we may have observed a reversion of debt structures towards more risky compositions.  To illustrate this point, we perform a simple counterfactual exercise using high-frequency (i.e., monthly) debt data available for Brazil.  The Brazilian Finance Ministry and Central Bank publish detailed monthly data on domestic and external debt composition on their websites, including maturity, duration, currency composition and indexation, with data availability extending all the way back to the mid-1990s.  Using these data we compute the simple historical correlation between debt composition and a measure of global risk aversion — JP Morgan’s EMBI-Global spreads.  The results reveal a significant negative correlation between debt maturities (also duration) and the measure of global risk, and a positive correlation between foreign-currency debt (and Selic-indexed debt) and the same measure of global risk.6  While historical correlations are no proof of causality, they are nonetheless strongly suggestive.  The counterfactual exercise consisted of using this information to answer the following question: Assuming that the historical correlation between these variables is stable (admittedly a very strong assumption), and that the EMBI spreads remain at crisis-peak levels for a long time (i.e., there is a protracted crisis), what is the predicted debt composition for Brazil at crisis-peak spreads levels?  The answer, shown in Table 1, suggests a sharp reversion to riskier debt levels along all dimensions of debt composition.

As it is virtually impossible to know what debt managers would have done under different scenarios, the exercise above represents a thought experiment. . . .

Often overlooked in these debates is the fact that there does not yet exist a large investor base in the region for debt denominated in domestic currency at fixed nominal rates and reasonably long maturities (IDB, 2007).  This implies that the increase in the share of domestic debt issued in local currencies in recent years was in part possible through an increase in the presence of foreign investors in local securities markets.  In the case of Brazil, for example, Borensztein and Loungani (2009) report that the net asset value of the total holdings of local securities by foreign investors increased from approximately $50 billion in the 1990s to $250 billion by mid-2008, a development that can increase liquidity pressures during a protracted sudden stop.  While before (when debt composition was tilted towards external debt) attempts to liquidate positions by external investors remained circumscribed to the secondary debt markets and the liquidity crunch was limited to the rollover needs, a sudden stop might now trigger a sell-off of domestic assets as foreign investors try to repatriate their holdings.  Therefore, with the current financial structure, the potential sell-off of the domestic currency is the total investment position in domestic markets, albeit devalued by the crash in asset prices that is likely to take place. . . .

2  Domestic debt refers to the liabilities issued under national law and subject to domestic courts’ jurisdiction.  External debt is issued in a foreign country and subject to that country’s court jurisdiction.  The difference between the two types of debt has narrowed considerably in recent year, as the holders of bonds issued in domestic markets may be international investors and domestic investors may hold bonds issued in international markets.

5  Examples of the speed at which debt composition can change on the eve of a sudden stop are provided by Mexico in 1994 and Brazil in 1998 and were extensively discussed in (IDB, 2008).

6  Foreign currency-indexed debt and SELIC-indexed interest rate (the overnight reference interest rate) are considered “risky” as they are vulnerable to variations in the exchange rate (in the first case) or in overnight domestic interest rates (in the second case), which are known to be very volatile during sudden stops.