Is there an economic recovery underway?  Was there one that has now stopped?  Will our current recession, partly recovered from, now tumble downward again in a second or “double” dip?  Mainstream politicians, journalists, and academics are engaged in hot and heavy debates about recoveries and double dips.  Yet the economic reality for most Americans is altogether different.

The Economic Policy Institute (EPI) in Washington produced the graph below that we can use to clarify and correct the confusion about “recovery” and “double dip recessions.” 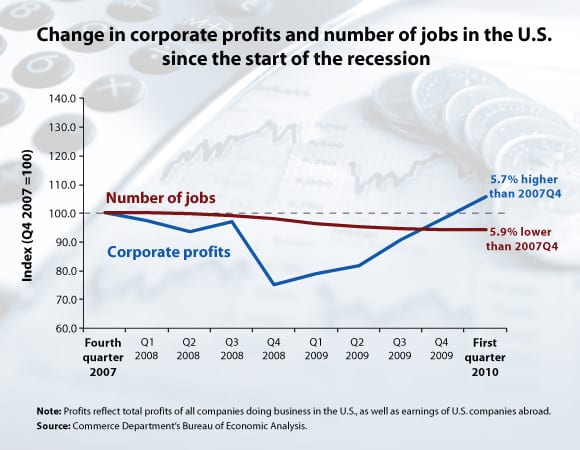 A better measure of economic conditions is the number of paid jobs provided by the economy.   The EPI graph shows that number to have begun its fall early in this Great Recession and to have continued that decline ever since.  Jobs disappeared even as hundreds of thousands of young people finished their schooling and newly began looking for work.  At the same time, reduced hours and involuntary furloughs deteriorated the qualities of many jobs that were not cut.  So too did the widespread decreases in wages and benefits (pensions, medical insurance, holidays, etc.).  Job insecurity rose for nearly everyone.

There never was a “recovery” for the mass of Americans.  Business had a recovery and now faces a double dip.  For the mass of workers, they face no double dip since their economic conditions never recovered.  Their risk is that corporations would respond to a double dip in their profits by shifting still more of the costs of this capitalist crisis onto workers.