The International Bank for Reconstruction and Development (IBRD) was established at Bretton Woods in July 1944, at the initiative of forty-five countries that had come together for the first monetary and financial conference of the United Nations.  In 2010, it had 186 member countries, with Kosovo its latest addition (it joined in June 2009).

The IBRD’s initial objective was to supply public capital for the reconstruction of Western Europe after the Second World War so that it remained a stable ally and provided a market for the goods manufactured in the United States.  It later shifted to financing the development of countries of the South, becoming, to use its own words, “a vital source of financial and technical assistance to developing countries around the world.”  The strategy behind this assistance is hardly neutral and most controversial.

Four other bodies were later formed, to make what is known as the World Bank Group.  These are the International Finance Corporation set up in 1956 to finance the private sector in developing countries; the International Development Association (IDA), in 1960, for loans to the poorest countries; the International Center for Settlement of Investment Disputes in 1966 (a court to which private companies can turn if they consider that their interests were slighted by a public decision, even if democratically taken by a government that cares for people’s living conditions); and the Multilateral Investment Guarantee Agency in 1988 to encourage investment in the developing countries.

Each member country appoints a governor as its representative, generally its finance minister, and in some cases the minister for development.  They come together within the Council of Governors (CG), which is the World Bank’s executive committee.  The CG sits once a year (in the fall, two years out of three in Washington) and decides on general objectives.  It is in charge of major decisions, such as accepting new member countries or preparing the annual budget.  The spring meeting (held jointly with the IMF in Washington) evaluates the impact of the World Bank’s and IMF’s actions.  These two meetings are the occasion of protest demonstrations and increasingly visible counter-summits.

For the daily running of the World Bank’s missions, the Council of Governors delegates its power to a Board of Executive Directors that consists of twenty-four members.  Each of the following eight countries has the privilege of appointing a director: United States, Japan, Germany, France, United kingdom, Saudi Arabia, China, and Russia.  The other sixteen are appointed by groups of countries with often surprising boundaries: a rich country is usually associated with a group of developing countries, and of course it is the rich country that holds a seat on the Board of Executive Directors and votes for all countries in the group.  For instance, an Austrian director represents the group that consists of Austria, Belarus, Belgium, Hungary, Kazakhstan, Luxembourg, Slovakia, Czech Republic, Slovenia, and Turkey.  Similarly, Switzerland is head of the group that is ironically called Switzistan since it consists of Azerbaijan, Kyrgyzstan, Poland, Serbia, Switzerland, Tajikistan, Turkmenistan, and Uzbekistan.

The Board of Executive Directors, which meets at least three times a week, elects a president for five years.  Against all democratic principles, a tacit rule determines that the position must go to a U.S. representative who has been selected by the U.S. president.  The Board of Executive Directors merely sanctions the choice.  From 1995 to 2005, the ninth president of the World Bank was James D. Wolfensohn.  Formerly director of the Business Bank sector of Salomon Brothers in New York and Australian-born, he had to become a U.S. citizen to be appointed to this strategic post.

In March 2005, U.S. President George W. Bush appointed Paul Wolfowitz president of the World Bank.  As a former Pentagon top gun, Wolfowitz was one of the instigators of the invasion of Iraq in March 2003 by an armed coalition led by the United States.  In April 2007, while he posed as a leader of the struggle against corruption, Wolfowitz was strongly criticized for having granted a substantial rise in salary to his partner, Shaha Riza, who also worked at the World Bank.  Wolfowitz, who had been caught in the act, had no option but to resign, despite the continued support of George W. Bush.  According to the same tacit rule, he was replaced by a Bush appointee, namely Robert Zoellick, who had been successively head of the first President Bush’s cabinet in the early 1990s, trade secretary in the early 2000s, and number two at the State Department next to Condoleezza Rice from January 2005 to June 2006.  After that, he worked for Goldman Sachs, one of the world’s biggest investment banks.

Still, there is considerable room for making global institutions more democratic.  Many proposals have been made to remove such patently undemocratic practices as the veto on the UN Security Council and the way the leaders of the IMF and World Bank are selected. — UNDP, Global Human Development Report, 2002

Each member country in the World Bank is granted a quota that determines what influence it can (or cannot) have within the bank.  From this quota (established in relation to its economic situation), a complicated reckoning determines the country’s voting power: a fixed part of 250 votes and a part that is proportional to its quota.  Contrary to what happens at the UN General Assembly, where each country has one vote (with the major exception of the Security Council where five countries hold a right of veto), the World Bank system amounts to $1 = one vote.  But contrary to a company’s shareholders, a country cannot decide to increase its World Bank quota in order to have more weight.  The system is completely locked. 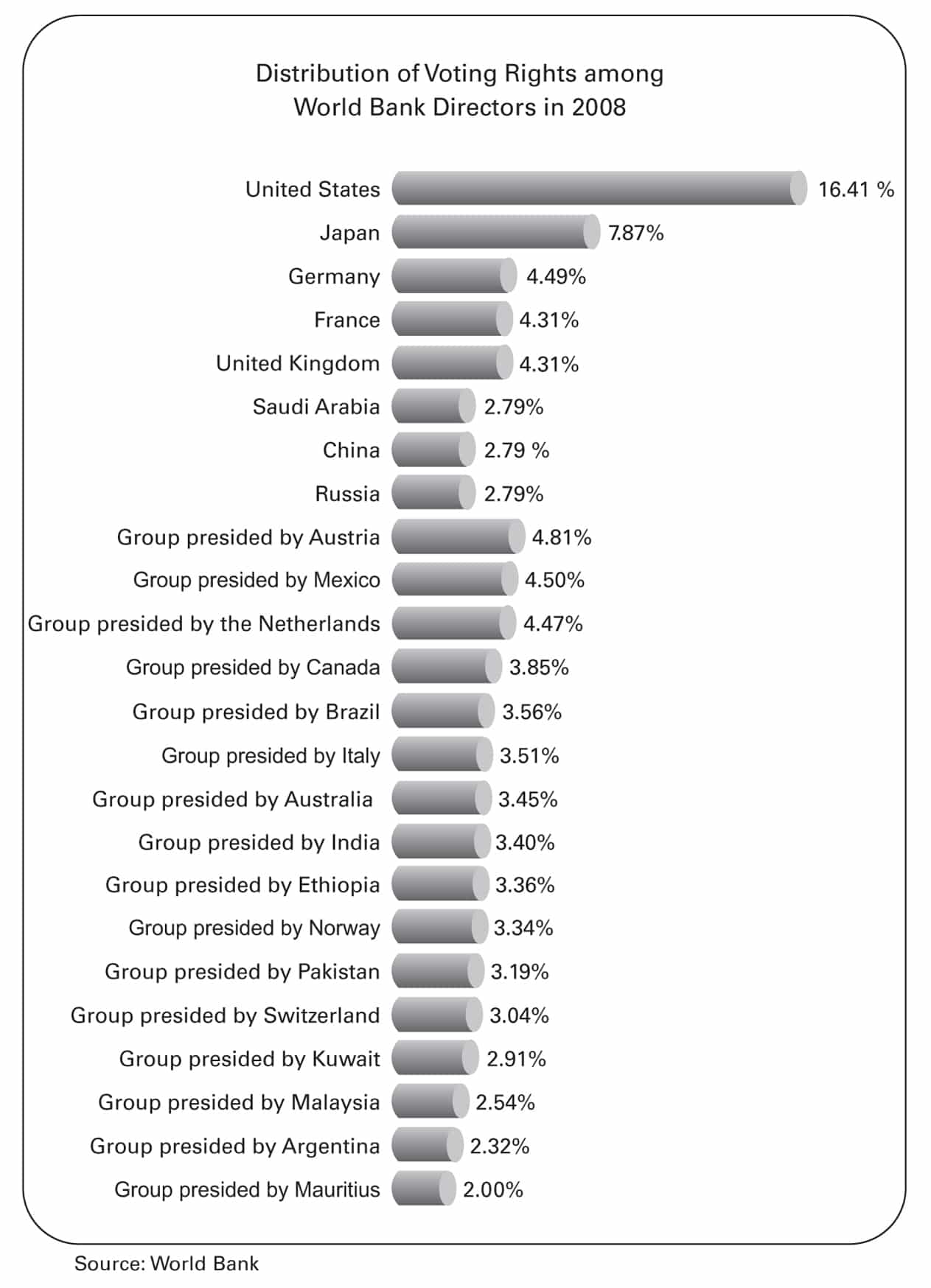 As can clearly be seen, the developing countries cannot counter countries of the Triad, which have a lion’s share and thus can ensure the ways and means of systematically imposing their policies.

The scandal is not limited to the unfair distribution of voting rights.  The United States fashioned this institution to its requirements and managed to enforce the rule that all major decisions can be made only with a majority of 85 percent of votes.  As it is the only country with more than 15 percent of voting rights, it can, de facto, block any major change in the World Bank.  The E.U. countries that could also reach 15 percent are generally content with ratifying the U.S. position.  On the few occasions when European countries joined forces and threatened to use the blocking minority, it was in defense of their own selfish interests.  In the future, we could imagine a coalition of developing countries reaching a blocking minority to oppose the election of the next U.S. candidate as president of the World Bank.  In any case, so far the U.S. Treasury is the undisputed skipper and can freeze any change that would not fit its views.  The physical location of the institution’s headquarters in Washington, a stone’s throw from the White House, is significant.  Over the years, readjustments in the voting rights led to the emergence of new nations.  But though the United States agreed to reduce its share, it made sure it would still be over the 15 percent threshold.

Some blame the Bank’s dispersion on its main shareholder (the United States), which, in view of the reduction of its bilateral aid program, considers the institution as a particularly useful instrument for exerting its influence in the developing countries.  It can then be used as a source of funding to be granted to its friends and denied to its enemies. — Yves Tavernier, French MP, French National Assembly Finance Commission’s Report on the Activities and Control of the IMF and the World Bank, 2001

The International Development Association (IDA) is officially just an association, but it is tied up with the IBRD, which runs it.  In 2008, it numbered 167 member states, of which 78 (and 39 of those in Africa) met the conditions to benefit from its loans, that is, an annual income per inhabitant of less than $1,095 (figure updated each year).  These countries borrow over long periods (usually between thirty-five and forty years, with an initial deferral of ten years) and at very low interest rates (of around 0.75 percent).  The money comes either from the richest countries, which reconstitute the IDA fund every three years, or from the benefits the IBRD derives from repayments by middle-income countries.  Notice the IDA’s principles are apt to change when it suits the World Bank: China can borrow both from the IBRD and from IDA even though the income per capita is well over $1,095.

The other developing countries borrow from the IBRD at rates close to going market rates.  The IBRD is careful to select profitable projects, just like a normal bank.  The World Bank gets the money it needs for these loans by borrowing on the money markets.  Indeed, the World Bank, guaranteed by the rich countries that are its biggest shareholders, is solid enough to get money at very good rates.  Then the IBRD lends it out to the member countries, which repay the loans over a period of fifteen to twenty years.

Such a privileged position for borrowing from the markets enables the IBRD to set money aside for running costs and even to make profits: between $1 billion and $3 billion a year.  Of the $24.7 billion of World Bank loans in 2007, more than half were made through the IBRD: $12.8 billion, in comparison with $11.9 billion for the IDA. 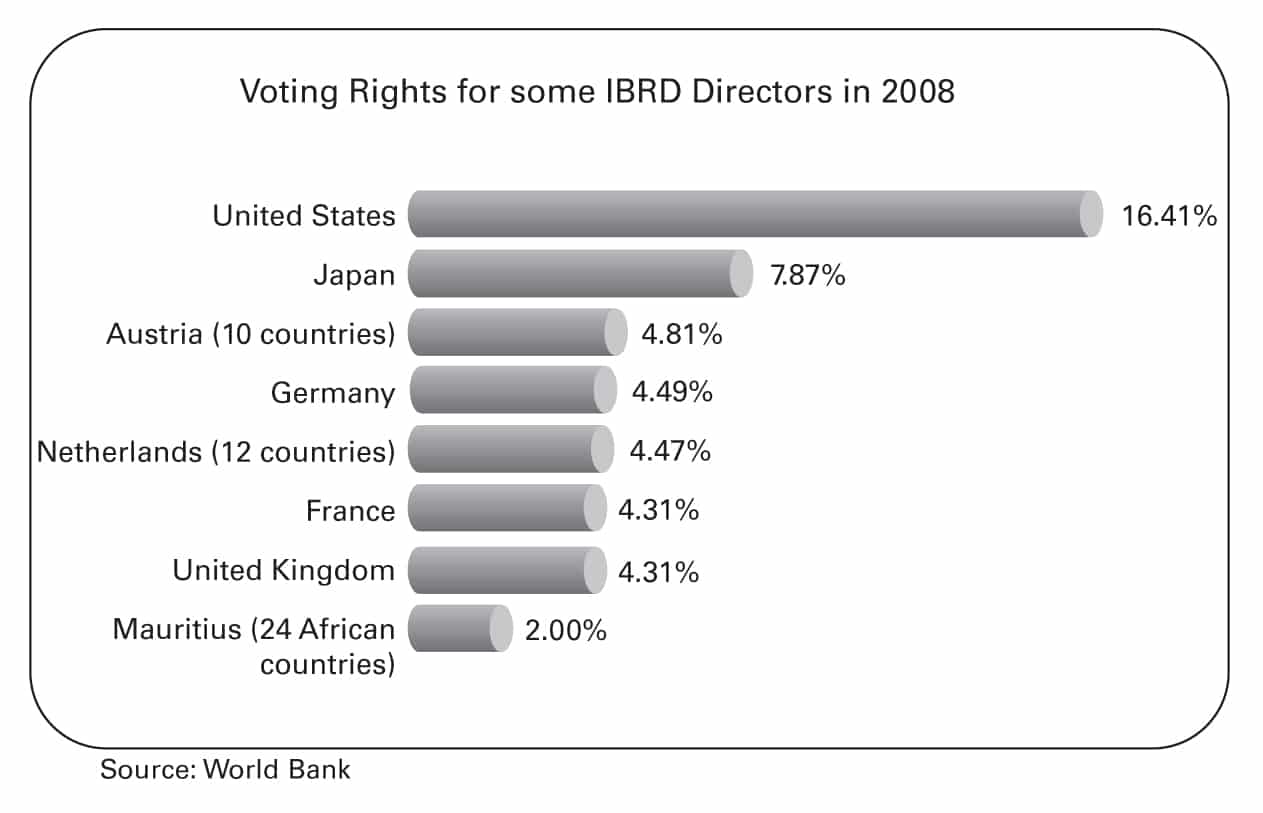 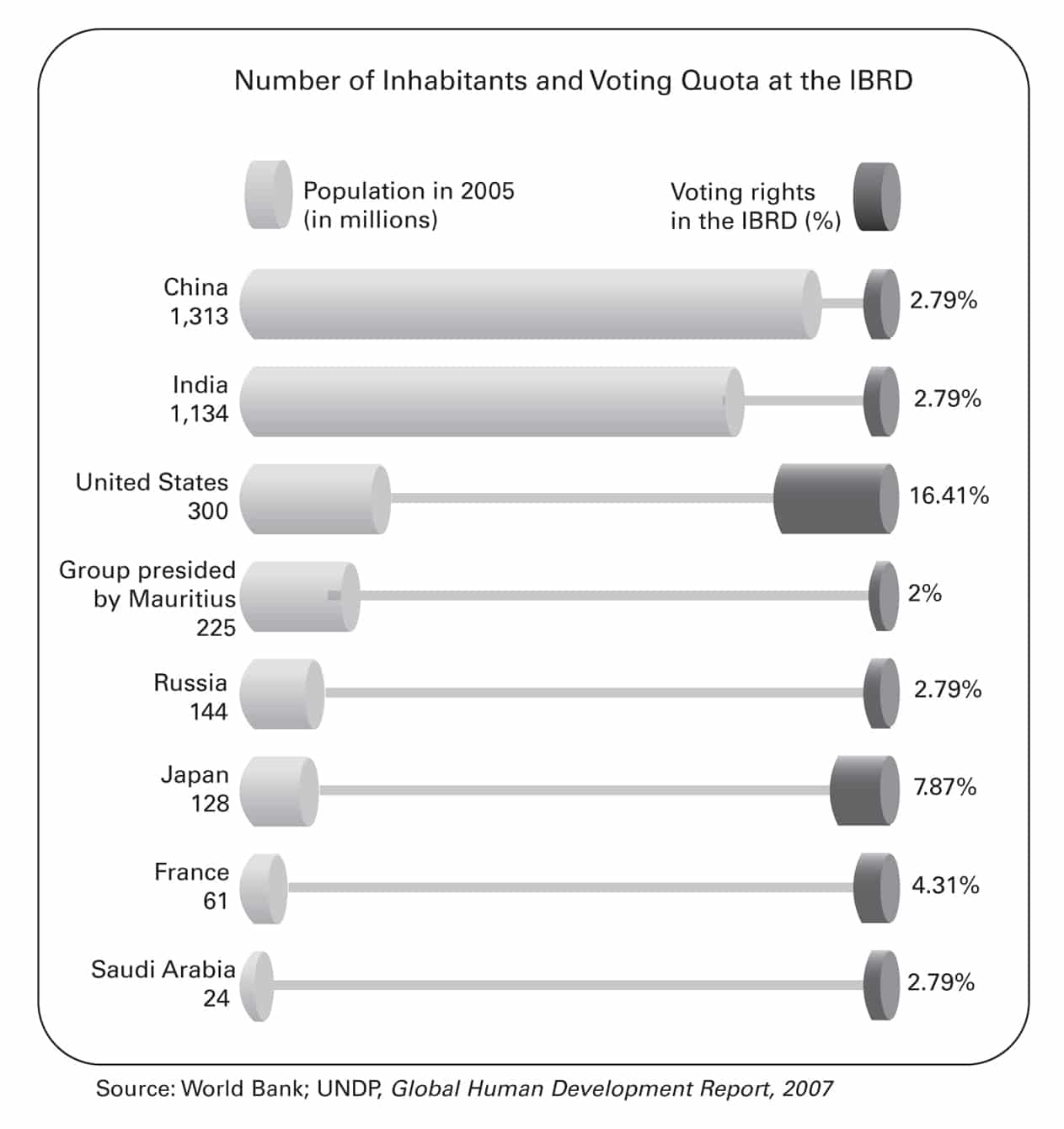 As indebtedness has grown, the World Bank, in conjunction with the IMF, has increasingly turned to actions aimed at producing macroeconomic effects and imposed more and more structural adjustment policies.  The Bank does not hesitate to “advise” the countries subjected to IMF therapy on the best ways to promote a most controversial kind of growth — through reducing budget deficits, attracting foreign investors, liberalizing their economies, and opening markets (and doing away with all protection of their local economy). It even directly participates in the financing of such reforms through specific loans.

Is it reasonable that the World Bank should be giving its support to private small-scale business projects for access to water and electricity, instead of contributing to the construction of public systems?  Should the World Bank be financing private systems of health and education? — Yves Tavernier, French MP, French National Assembly Finance Commission’s Report on the Activities and Control of the IMF and the World Bank, 2001

Éric Toussaint, a doctor in political science, is president of the Committee for the Abolition of Third World Debt, CADTM Belgium.  He is author of A Diagnosis of Emerging Global Crisis and Alternatives, and The World Bank: A Critical Primer, among other books.  Damien Millet teaches mathematics and is spokesperson for CADTM France.  He is the author of L’Afrique sans dette, and co-author with Éric Toussaint of Tsunami Aid or Debt Cancellation.  The text above is an excerpt (endnotes omitted) from Debt, the IMF, and the World Bank: Sixty Questions, Sixty Answers (Monthly Review Press, 2010).  Meet Éric Toussaint at the book launch of Debt, the IMF, and the World Bank (Wednesday, 15 September 2010, 6 PM,
Venezuelan Mission to the United Nations, 335 East 46th Street, NYC — for more information , visit <monthlyreview.org/books/event_toussaint.php>).