Recent economic turmoil has led state and local governments to seek new paths to offset budget shortfalls.  Among other things, one widely discussed policy option is state employee pension reforms.  These proposals seek to cut pension benefits, and, moreover, to increase the retirement age.  State and local government employees generally are able to access full retirement benefits at a lower age than most other American workers, for whom the current age for eligibility for full Social Security benefits is 66 (and which will rise to 67 by 2027).  Policymakers, however, must not overlook the fact that a large share of public sector workers are in physically strenuous jobs.  If the retirement age were increased, many of these workers, due to the physical challenges of their jobs, would have to leave the workforce before they are eligible for full retirement benefits.

A recent report by the Center for Economic and Policy Research (CEPR) found that nearly 45 percent of workers aged 58 and older (that is, about 8.5 million workers) had physically demanding jobs or jobs that had difficult working conditions in 2009.1  Physically demanding jobs include lifting or handling of heavy objects, kneeling and crouching, or significant time standing or making repetitive motions.  Difficult working conditions include cramped workspaces, exposure to abnormal temperatures or hazardous conditions, or labor in non-climate-controlled conditions.2

In the public sector, the story is similar.  Looking at older workers in the age cohort from 55 to 65, the near-retirees and early retirement benefit-eligibles, almost one in three (31.8 percent) state and local government employees had physically demanding jobs in 2009 (see Table 1).  Nearly a fifth (19.9 percent) of these workers had difficult working conditions in their jobs.  This amounts to about two-in-five (that is, more than 1.4 million) state and local government workers in either physically strenuous jobs or jobs with difficult working conditions.  Notably, almost half (47.5 percent) of local government employees between ages 55 to 65 held difficult jobs (physically demanding jobs or jobs with difficult working conditions) in 2009. 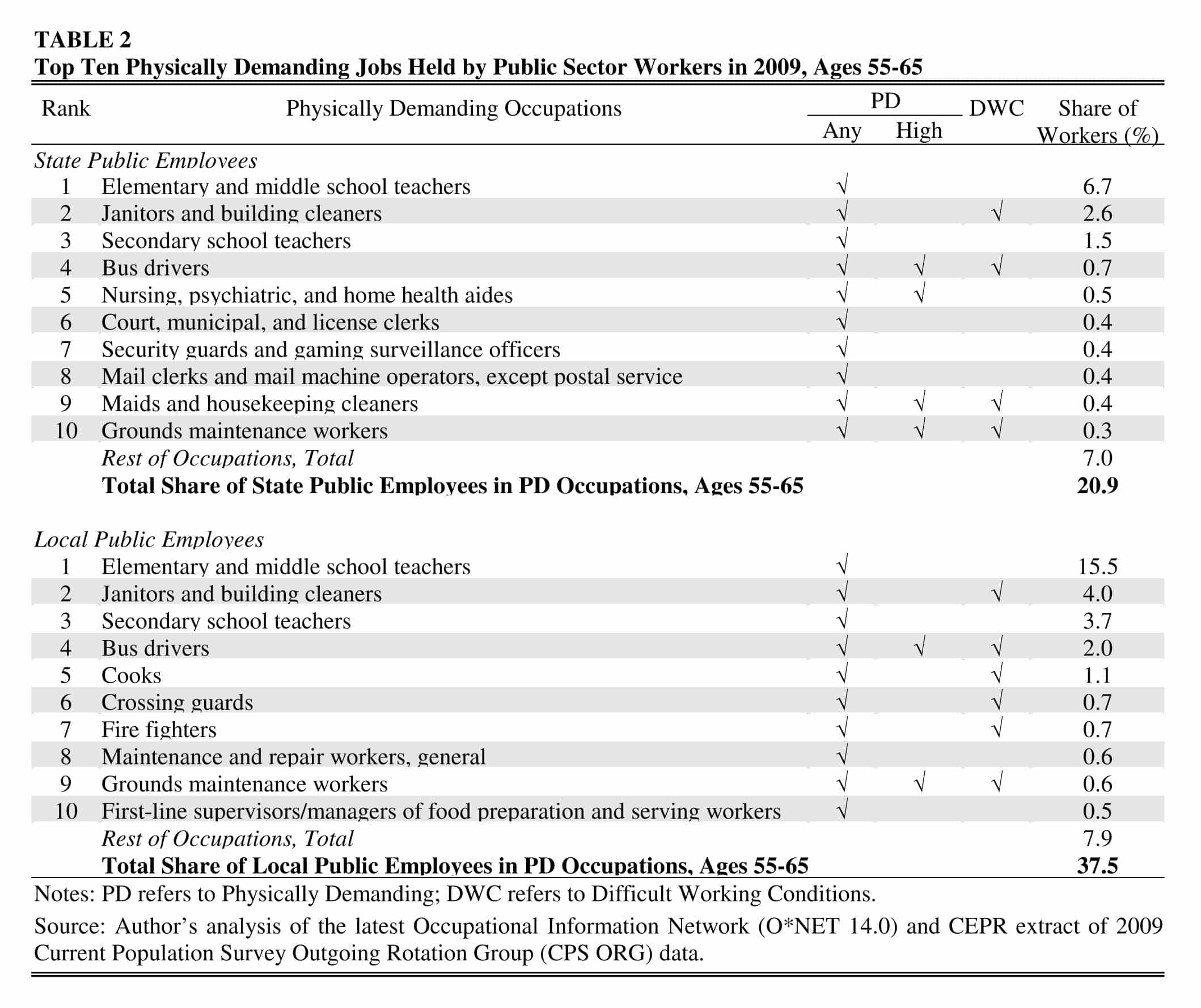 2  For a comprehensive list of conditions that qualify as physically demanding or difficult working conditions, see Rho (2010), p. 3.

Hye Jin Rho is a Research Assistant at the Center for Economic and Policy Research in Washington, D.C.  This article was first published by CEPR in October 2010.

Hungary Toxic Mud Disaster Could Have Been Avoided
The Death Penalty, Mumia Abu-Jamal, and the European Parliament