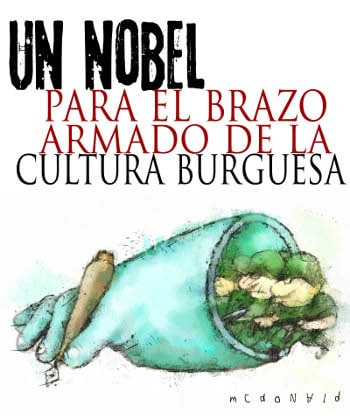 A Nobel Prize for an armed hand of bourgeois culture

Allan McDonald is a Honduran cartoonist.  This cartoon was first published in Rebelión on 14 October 2010.  Cf. “The Spanish liberal media explain the Honduran military coup using the same argument used by the perpetrators of the coup in Honduras: that is to say, it was necessary to prevent President Zelaya from changing the Constitution to stay in power.  A prominent voice in this liberal chorus has been Mario Vargas Llosa, who, as was to be expected, in an article in El País (“El golpe de las burlas,” 12.07.09), while criticizing the forms that it took, nevertheless defended the removal of President Zelaya, using the same arguments as mentioned above” (Vicenç Navarro, “La doble moral de los liberales: los casos de Honduras y Colombia,” El Plural, 28 September 2009).  Translation by Yoshie Furuhashi (@yoshiefuruhashi | yoshie.furuhashi [at] gmail.com).