It is commonly reported in the international press, and widely believed, that the government of President Hugo Chávez controls the media in Venezuela.  For example, writing about Venezuela’s September elections for the National Assembly, the Washington Post‘s deputy editorial page editor and columnist, Jackson Diehl, referred to the Chávez “regime’s domination of the media. . . .”1  In an interview on CNN, Lucy Morillon of Reporters Without Borders stated, “President Chávez controls most of the TV stations.”2  And on PBS in November 2010, former Assistant Secretary of State for Western Hemisphere Affairs Roger Noriega stated that the Venezuelan media is “virtually under the control of Chávez.”3  Such statements are made regularly in the major media and almost never challenged.

Table 1 shows the evolution of Venezuelan television audience share from 2000-2010.  There are three categories: private broadcast channels, which are privately owned and available on broadcast television without payment; the state channels, which are run by the government and also broadcast without payment4 by the viewer; and private paid TV, which includes cable and satellite, for which the subscriber must pay a fee; and other paid programming that is being watched during the time of the survey.

Since the private TV owners are mostly against the government, it is clear that more than 94 percent of the TV that is seen by Venezuelans is not pro-government.  In fact, much of the private media is stridently anti-government, in ways that go beyond the boundaries of what is permitted in the United States, for example.5  There are no data that describe the breakdown of audience share of the various TV channels on the basis of political bias.  However, it is clear from this data, based on household surveys over a 10-year period, that statements about the Venezuelan government “controlling” or “dominating” the media are not only exaggerated, but simply false.

The data show that even after the expansion of the main state television station (VTV), and the creation or expansion of four other channels (TVES, Vive TV, TV Catia, and Asamblea), the state TV’s audience share is still very small — although it is significantly larger than it was a decade ago.  For the years 2000-2001, the state channels averaged about 1.9 percent of the market, as compared to 5.9 percent for 2009-2010.

The pattern of audience share shows a clear relationship to political events.  For example, the state TV’s audience share more than doubled, from 1.7 percent at the beginning of 2002, to 4.1 percent in May, after the military coup that briefly overthrew the Chávez government in April of that year.  Similarly in December of 2002, the state TV share leaped to 9.7 percent, and was at 6.7 and 5.23 percent for January-February 2003.  This very elevated audience share for state TV, although still small in absolute terms, was undoubtedly connected to the opposition-led oil strike during those months, which crippled the economy and caused a political crisis as well.

It seems that during times of political turmoil or when political events are more elevated in the public mind, the state TV share of the audience increases.  The table also shows spikes in state TV share in the run-up to the December 2006 presidential elections; the constitutional amendments referendum of December 2007; and the constitutional amendment referendum of February 2009.

The most likely explanation for these spikes is that the TV audience is more interested in the news during these times; they may also be more interested in hearing another side of the story — i.e. the pro-government side — at these moments.  After the political crisis or events pass, they move back to private TV, mostly for their favorite soap operas, sports programming, or other entertainment.  However, even during these spikes, the state TV audience share remains small.

The country’s oldest and largest television station — RCTV (Radio Caracas Television) — was denied a renewal of its broadcast license in May 2007 and went off the air on open broadcast TV the following month.  The station, along with others, had participated in the 2002 military coup that temporarily overthrew the elected president.  However, the non-renewal of RCTV’s broadcast license, which had given it a legal monopoly over a particular part of the broadcast spectrum, did not shut down RCTV — as was commonly mis-reported in the international media.  The station continued to broadcast through cable and satellite until January of 2010.  Operating under the name RCTV International while still maintaining the same program content, RCTV claimed that it was an international station, and therefore exempt from the regulatory authority of the National Telecommunications Commission (CONATEL).  This claim was rejected by the Venezuelan government after CONATEL concluded that RCTV’s content and operations were 90% domestic and thus subject to CONATEL’s broadcast regulations.  RCTV continued to insist that it was not subject to domestic law, for example, regarding the broadcast of the President’s speeches (a law that predates the Chávez presidency).  The station was therefore shut down on January 24, 2010, pending court appeals.

Some of these events are also visible in the data.  The paid TV audience share jumps from 18.7 percent in May 2007 to 26.2 percent in June, an increase greater than the entire state TV audience share.  This reflects RCTV’s loss of its broadcast license, as people switched to paid TV to continue watching — according to the polling data — their favorite soap operas.6  The paid TV share continues to increase to an average of 33 percent for the first nine months of 2010.  The loss of RCTV’s paid TV audience does not show up as a loss of paid TV’s audience share, possibly because viewers simply switched to other paid TV channels, rather than to the state TV.  According to media research firm AGB Panamericana de Venezuela Medición S.A., many Venezuelans still have access to RCTV programming through RCN Colombia on Venezuelan paid TV.

It is worth noting that the share of government TV in Venezuela, currently at an average of 5.1 percent for 2010, is small not only in its size but in comparison to many other countries with public television.  For example, the audience share of public TV in France is about 37 percent7 and in the UK it is also about 37.8 percent.8  Of course, these public stations are less partisan than most Venezuelan state TV and in that way are not directly comparable.  However, the same is true for the other side of the equation: France and the UK do not have private stations that are part of an opposition political movement, at least not to anywhere near the same degree as in Venezuela.

There are polling data indicating that the private, opposition media’s dominance in Venezuela has a significant influence on political beliefs.  For example, an Associated Press-Ipsos poll conducted in November 2006, just before the presidential election, showed that “57 percent of respondents were at least somewhat concerned that people could face reprisals for how they vote,” with only 42 percent “very confident their votes would be kept secret.”9  This was a theme repeatedly transmitted through opposition media.  In fact, there is a secret ballot and it is no more possible for the government to know how someone voted in Venezuela than it is in the United States, Germany, or Sweden.10

Given the small share of the state in the Venezuelan media,11 it appears that the primary means through which the government gets its message out is through Chávez himself, in the “cadenas” that private broadcast TV channels are required to carry.  In 2009, according to the same data from AGB Panamericana de Venezuela Medición S.A., this amounted to an average of almost 24 minutes per day.  This has the potential to get the government’s message out more than the current share of state TV programming; however without data on how many people watch these speeches, it is difficult to measure its impact.

According to AGB, a representative sample of 1000 households was constructed from a prior survey of 10,000 households based on census data.  This survey is conducted every 1 to 2 years, depending on how much socio-economic change there is in each sample region.  The sample was constructed to be representative in terms of socio-economic status, gender, age, and other household characteristics.

Once the survey sample has been determined, data is collected through equipment boxes placed in each home, measuring minutes of each channel watched.  The audience share for each channel is then determined by dividing the minutes each channel is watched by the amount of time that the television is on.

Table 2 shows the private and state channels identified in the study, for the years 2001-2002; 2003-2006; and 2002-2010.  Note that the regional channel TV Catia (2003-2006; 2007-2010) and the international channel Telesur (2007-2010) are included by AGB as “State Channels.”  Catia TV is an independent, community-based television station that is not run by or responsible to the government.  Telesur is sponsored by the governments of Argentina, Bolivia, Cuba, Ecuador, Nicaragua, Uruguay, and Venezuela.  However, the inclusion of these channels as “state channels” in the AGB data does not significantly change the main result in this report; if they were removed from this category, the audience share of state television would be even smaller than the results shown in Table 1 and in the text. 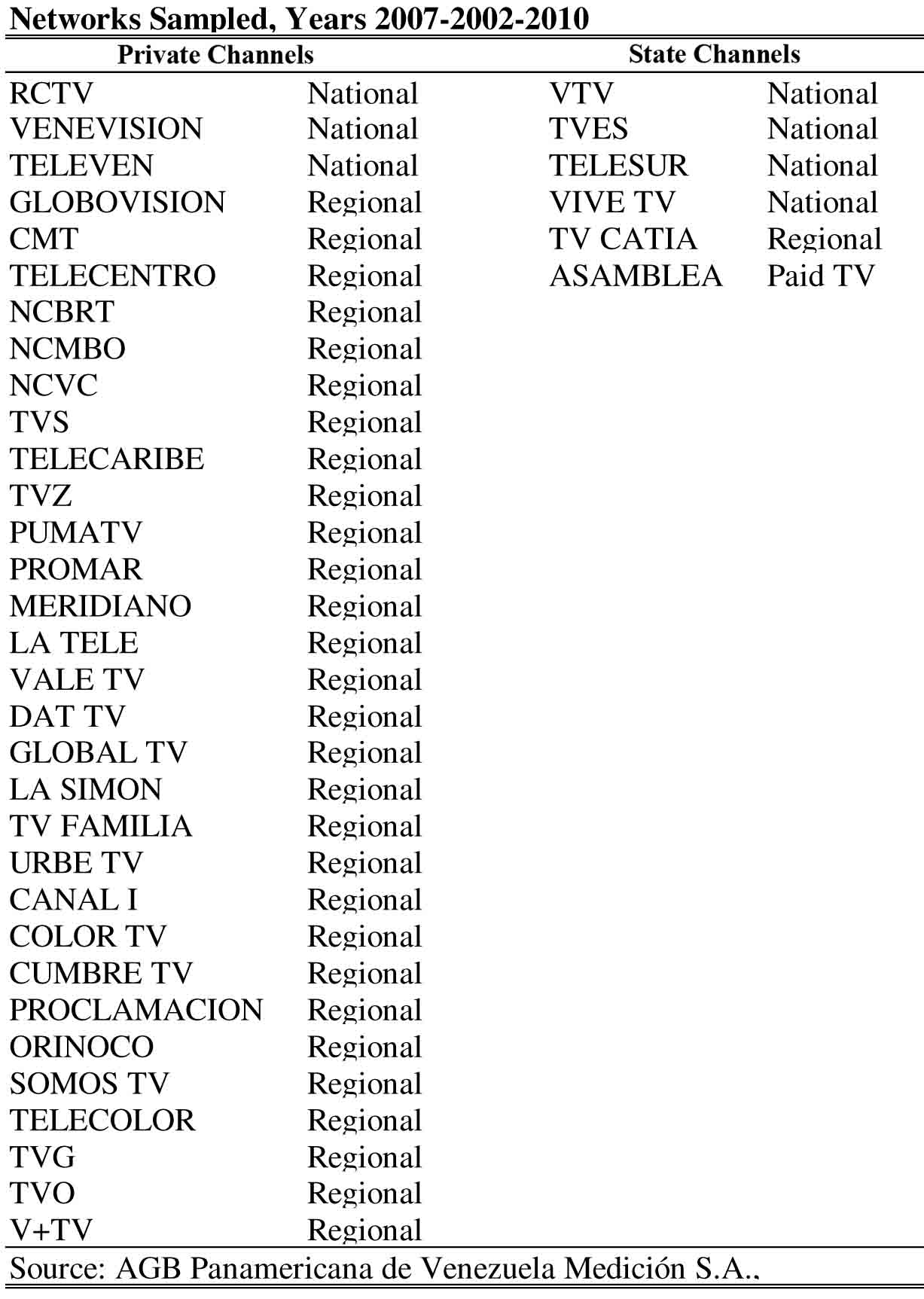 4  There is one exception, ASAMBLEA, which is a state channel but paid.

5  See Weisbrot, 2008. “Inter-American Press Association Shouldn’t Pursue Partisan Agenda in Venezuela.”  Editor and
Publisher.  January 7.  “For example, two weeks before the 2004 U.S. Presidential election, the Sinclair Broadcast Group of Maryland, which owns the largest chain of TV stations in the U.S., decided to broadcast a film that accused candidate John Kerry of betraying U.S. prisoners in Vietnam.  Nineteen Democratic senators sent a letter to the US Federal Communications Commission calling for an investigation, and some made public statements that Sinclair’s broadcast license could be in jeopardy if it carried through with its plans.  Sinclair backed down and did not broadcast the film.”

6  “Pollster Datanalisis found almost 70 percent of Venezuelans opposed the shut-down, but most cited the loss of their favorite soap operas rather than concerns about limits on freedom of expression.”  Ellsworth, Brian and Christian Oliver.  “Venezuela Replaces Opposition TV with State Network.”  Reuters.  May 28, 2007.

11  Although this report has focused on television, there is no reason to believe that the inclusion of radio and newspaper media would change the picture.  For example, according to CONATEL data, only 14 percent of radio stations are publicly owned (70 radio stations of 494 total).  The CONATEL data can be found in “Situación actual de los servicios de radiofusión Sonora, TV abierta y por suscripción”.  PowerPoint presentation, National Telecomunications Commission of the Bolivarian Republic of Venezuela (CONATEL), 2009.  While there are no reliable data for radio audience share or newspaper circulation, it is unlikely that these media would differ substantially enough in their audience to alter the communications landscape that is dominated by the private television media.  In fact, radio and newspaper media present proportionately much more strident and partisan anti-government material than does most of the private television media.

Mark Weisbrot is an economist and Co-Director of the Center for Economic and Policy Research in Washington, D.C.  Tara Ruttenberg is a Research Intern at CEPR.  This article was first published by CEPR in December 2010 under a Creative Commons license.  En Español.