Contested Waters: Background to a Crisis

1. On November 23, 2010, military troops from the Republic of Korea (ROK, or South Korea) and the United States conducted war-simulation exercises, dubbed “Hoguk” [“Defend the State”], a massive joint endeavor involving 70,000 soldiers, 600 tanks, 500 warplanes, 90 helicopters, and 50 warships.  It was slated to take place over a period of nine days.

3. South Korean artillery units located in the West Sea Islands, just seven miles from the North Korean coast, engaged in firing exercises on November 23, 2010, for four hours.  According to the South Korean Ministry of National Defense, the units on those islands, including Yeonpyeong Island, fired 3,657 times, or over 900 shells per hour, into contested waters claimed by both Pyongyang and Seoul near the Northern Limit Line (NLL).  Drawn unilaterally by the US Navy in 1953, the NLL is not internationally recognized and has never been accepted by North Korea.

5. President Obama dispatched the nuclear-powered aircraft carrier the USS George Washington (carrying 75 warplanes and a crew of over 6,000) and other warships to conduct additional joint war exercises with the South Korean military beginning November 28th.

6. Amid the recent hostilities, modest mitigating gestures have emerged, though compromised by a confrontational war footing in the region.  North Korea issued a statement calling the civilian deaths “very regrettable,” but it also criticized South Korea for creating what the North called “a human shield by placing civilians around artillery positions and inside military facilities.”  On November 29th, South Korea canceled a series of scheduled artillery drills from Yeonpyeong Island, offering no explanation for the change.  The massive US-ROK joint war exercises did resume in the Yellow Sea (or West Sea), but they have taken place outside the immediate zone of contested waters, staged approximately 125 miles south of the NLL. 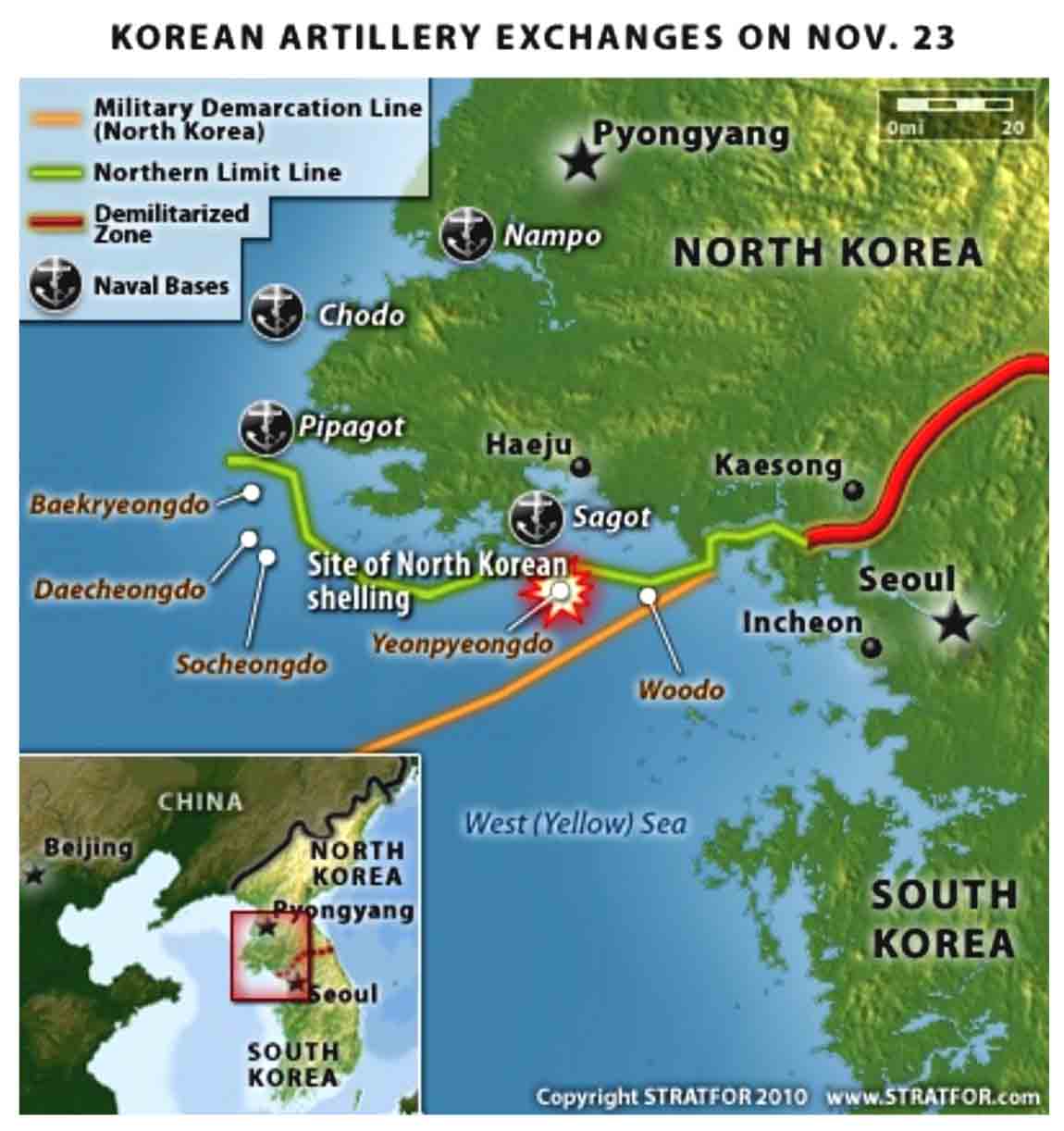 These recurring tragic incidents off Korea’s west coast have resulted from the unending state of war and continued national division on the Korean peninsula.

They underscore the frailty of the Armistice Agreement of 1953 and confirm the urgent need to replace that temporary truce with a permanent peace treaty.

As tensions continue to mount, it is critical that we urge President Barack Obama, 2009 Nobel Peace Laureate, to stop the US-ROK joint military exercises and to recognize that such war-simulation maneuvers inevitably increase the risk of an uncontrollable and unacceptable escalation that would threaten millions of lives.

The US must return to negotiations to reach a peace agreement that would finally end the Korean War.

South Korea must return to a peace process with North Korea in order to reduce the heightened volatility on the Korean peninsula that has endangered the entire region.

Direct negotiations, as a first step toward a peace treaty or agreement, are the only viable option in a heavily militarized region characterized by recurring naval conflicts, disputed borders and unresolved grievances.

The stakes for peace in Korea are enormous, and the time for a genuine peace process is now.

“We demonize [Kim Jong Il] as a ‘nut case,’ but I have talked to Russians, Chinese, South Koreans and Americans who have met with him at length, and all say he is extremely intelligent.  What Kim wants is sustained, serious talks with the US, leading to a comprehensive peace treaty. . . .  Our problem is that every time we elect a new president, we seem to feel that we have to start from scratch with North Korea.” — Donald P. Gregg, US ambassador to South Korea (1989-1993) and National Security Advisor to Vice-President George H.W. Bush

“. . . One item should be at the top of the agenda, however, in order to remove all unnecessary obstacles to progress, that is the establishment of a peace treaty to replace the truce that has been in place since 1953.  One of the things that have bedeviled all talks until now is the unresolved status of the Korean War.  A peace treaty would provide a baseline for relationships, eliminating the question of the other’s legitimacy and its right to exist.” — James Laney, US Ambassador to South Korea (1993-1997) and President Emeritus of Emory University

“Pyongyang has sent a consistent message that during direct talks with the United States, it is ready to conclude an agreement to end its nuclear programs, put them all under IAEA inspection and conclude a permanent peace treaty to replace the ‘temporary’ cease-fire of 1953.” — Jimmy Carter, 39th President of the United States

The National Campaign to End the Korean War is a coalition of concerned Korean American, veterans’, and human rights organizations as well as individuals in the United States who are working together to promote permanent peace on the Korean peninsula and a new US policy toward Korea by informing, educating, and mobilizing American people at both local and national levels.  Web site: <www.endthekoreanwar.org>.  This is a factsheet provided by the National Campaign to End the Korean War (1 December 2010); click here to download this factsheet in PDF.