We, the Black Comet Defense Committee, appeal to all fighters against discrimination in the world:

We would like to let you know what happened on a street near the Shibuya station, Tokyo, on December 4, 2010.

Choi Daniel (崔檀悦), also known as Black Comet, a young Zainichi Korean sociologist born in Japan, protested, alone, against a Japanese racist rally filled with ethnic hatred.  The racist mob assaulted him, and he suffered severe injuries requiring three weeks to heal.  The police, nonetheless, took no action against the perpetrators of violence, and arrested Black Comet, the victim of violence, for assaulting Shuhei Nishimura, a Japanese racist activist.

All Black Comet did was to protest non-violently, standing alone before the racist march, holding a banner (see the following video).  And the banner contained important messages.

He did not resort to any physical violence.  Rather, dozens of racists started attacking him all at once, punching him with fists, kicking him, using Hinomaru poles as weapons.  A lot of police officers were present at the scene to see who attacked whom.  Nevertheless, the Shibuya Police arrested Black Comet; they took his fingerprints; they did not offer him immediate medical care; moreover, they let the actual perpetrators of violence walk free without proper investigation.

Fortunately, Black Comet was released after about fifty hours of detention.  However, this incident revealed the corruption and depravity of the Japanese civil society and government.  Today’s Japan tolerates hate speech that debases human beings and also condones hateful mob violence.

I am here for a dialogue.
We shall defend the rights to ethnic education!!
We shall uphold the spirit of the HanShin Educational Struggle!
Unification of the homeland! 우리는하나 ANTIFA ☆ Black Comet 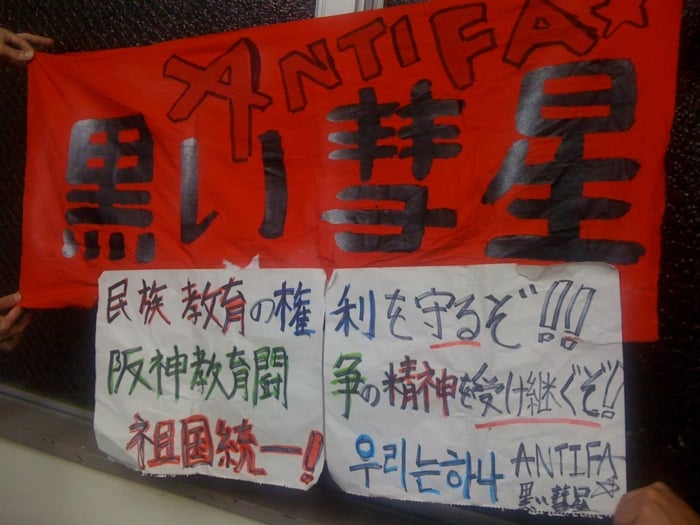 Black Comet was born in Japan and grew up in the Republic of Korea until the age of 13; since then, he has lived in Japan.

In the nineteenth century, Japan started invading Korea and unlawfully annexed the Korean Peninsula (then the Greater Korean Empire) in 1910.  Through its colonization, Japan imposed assimilation education on the Koreans, depriving them of their names and language and making them second-class Japanese.  Despite its 1945 defeat in World War 2, Japan has continued to violate the legitimate rights of Korean residents in Japan, Zainich, and other foreigners to ethnic education.  Symbolic of the resistance to such oppression was the HanShin Educational Struggle, which protested against the order, issued by the Supreme Commander of the Allied Powers (SCAP) in 1948, to close down Korean schools.

Instead of facing the historical responsibility for crimes against humanity, however, the Japanese government has persisted in its complicity with the division of the Korean Peninsula.  Japan participated in the Korean War on the American side; even now, it poses military threat to the peninsula as an ally of the United States.  In 2010, the Japanese government chose to take a further step: it excluded Korean schools from the “tuition-free policy for high schools,” which was supposed to be universal.  The action was taken as a part of the unjust policy of sanctions against the Democratic People’s Republic of Korea.  At the same time, it is also a clear sign of Japan’s continuing colonialism; it is an oppression of Korean residents in Japan, Zainichi, and it should not be tolerated.

Black Comet has been actively opposed to such discrimination.  He has objected not only to discrimination against Koreans but also to discrimination against all foreigners living in Japan.  He has collected signatures and participated in peaceful rallies; he has even organized an anti-racist march himself; he is also networking people against xenophobia on the Internet.  His supporters include his fellow Koreans, Japanese who oppose xenophobia, and even some Japanese nationalists.  He has been contributing to the anti-racist movements in this country.  His non-violent direct action on December 4 was no sudden caprice; it should be situated in the context of his steadfast commitment to the movements to counter xenophobia and discrimination against Korean schools.

Now, about the racists against whom Black Comet protested alone on December 4, 2010: they were celebrating the anniversary of their December 4, 2009 attack on the First Korean Elementary School of Kyoto, calling the students “sons and daughters of spies” and shouting “get out of Japan” (see the video below).

Black Comet expressed his opposition to such racists in a non-violent way and was severely beaten up.  The police arrested him; the Tokyo District Public Prosecutor’s Office did not indict him after lawyer Kenta Hagio‘s interventions on his behalf, but made an ambiguous decision: under the Japanese legal system, they should have explicitly stated “no suspicion,” but chose not to do so.

We are disappointed at what has been going on; we are also filled with a sense of crisis.  We should never let him be isolated.  As a member of the Japanese civil society as well as a Korean and a world citizen, he should not be personally exposed to any social, economic, or political costs because of the incident on December 4 last year.

We will never stop saying this:
We do not tolerate discrimination under any circumstances.
OUR struggle has only just begun.

We call upon people in the entire world to express solidarity with Black Comet and the statement above.  Circulation and translation are welcome and much appreciated.  Let us exchange our thoughts on this in Gaza, Pyongyang, Cairo, New Delhi, Chiapas, Kyoto, San Francisco, Cheju, Besançon, Siberia, Habana, Tsuruhashi, Jerusalem, Hong Kong, Cape town, Berlin, Vientiane, Euskadi, Seoul, Yaoundé, Teheran, Accra, Athens, Beijing, Ljubljana, Hiroshima, or any other place.  We ask you to remember “Shibuya 12.4” as an event in world history.

The Black Comet Defense Committee was formed within several hours of Black Comet’s arrest.  We have found him a lawyer, who went out of his way to get him released, written four letters to the public prosecutors, and visited them several times.  Our blog can be found at <d.hatena.ne.jp/free_antifa/>.  Email: schwarzerkomet at gmail.com.