Ebrahim Sharif is a 53-year-old Bahraini politician, businessman, husband, father — and now, a political prisoner.  He serves as the secretary general of the National Democratic Action Society (also known as Waad), a secular, moderate, and peaceful political opposition group in Bahrain.

At around 2 AM, on Thursday, March 17, 2011 Ebrahim was arrested at his home by the Bahrain government.  His only crime was calling for genuine democratic reforms in Bahrain.

He was not allowed to contact his family for over a week, and even then he was only allowed a few seconds to talk on the phone.  His lawyer is called upon by military authorities to attend interrogation sessions only, which has been twice so far since Ebrahim’s arrest.  Beyond that there has been no other communication.

We believe he may be at risk of torture or abuse under detention, as on April 10 he was reported to have been hospitalized for traumatic injuries.  This unconfirmed tragic news reached his wife a week later.  Since the beginning of April, four political detainees have died in police custody in Bahrain, their bodies showing significant bruises and other telltale signs of torture.

Although no formal charges have yet been brought against him, his arrest occurred amidst a massive military-backed security crackdown in the country against pro-democracy protests that began on February 14, 2011.  Wa’ad participated in the peaceful protest movement and, along with six other mainstream opposition political societies, called for a dialogue to bring about a genuine constitutional monarchy in Bahrain.

The arrest of Ebrahim Sharif is just one of several attacks targeting the political group Wa’ad since the start of the democracy protests:

Hundreds of other pro-democracy activists and protesters have also been incarcerated in Bahrain in recent weeks, without access to their families or lawyers.

In the past, Ebrahim has tackled a wide range of issues, ranging from political corruption in land deals to how to better improve the social welfare systems of Bahrain.

Ebrahim has always emphasized the Arab identity of Bahrain and firmly rejects any and all forms of violence and intimidation from all parties, pushing instead for peaceful and moderate reforms.  His arrest has been roundly condemned by international human rights groups and even the United States government.

After arresting Ebrahim Sharif and the other opposition leaders on March 17, the Bahrain government released this official statement, via the state-owned Bahrain News Agency.

We stand behind Ebrahim Sharif and his values and know that he is innocent.  We call on the government to release him immediately, along with the hundreds of other political prisoners languishing in Bahraini prison cells.

Find out how you can help with Ebrahim’s case.

You can also show your support on our Facebook page: www.facebook.com/FreeSharif 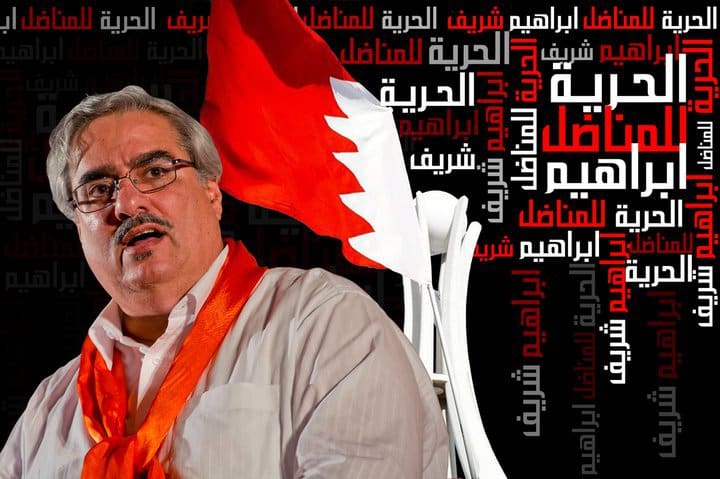