There was a time when global oil prices reflected changes in the real demand and supply of crude petroleum.  Of course, as with many other primary commodities, the changes in the market could be volatile, and so prices also fluctuated, sometimes sharply.  More than anything else, the global oil market was seen to reflect not only current economic conditions and perceptions of future activity, but also geopolitical changes and crosscurrents.

Ever since the early 1970s, when the Organisation of Petroleum Exporting Countries (OPEC) forced a threefold increase in global oil prices, its shadow has loomed large.  There is still a widespread perception that the cartel of oil-exporting countries can manipulate and influence the prices by changing the level of their own supplies.

But, in fact, OPEC is more like a club of a minority of oil producers, rather than a cartel that is in command of world oil supply.  It controls less than 40 per cent of the world’s oil production, compared with 70 per cent in the early 1970s.  Non-OPEC countries account for increasingly significant proportions of global supply: Russia has overtaken Saudi Arabia as the largest supplier of crude oil since 2009.  Partly as a result of this, OPEC has recently been quite ineffectual in imposing any kind of production quota on its members, who have increased or decreased their production as they wished.  Most of its members are producing exactly as they would if OPEC did not exist.

Indeed, for the past two decades, OPEC’s role has generally been more towards price stabilisation rather than pushing for increases, and it may even have played a moderating role in oil markets, including when particular events such as political disruptions in major exporting countries caused sudden supply shortfalls.  OPEC formerly abandoned its declared price band in 2005 and since then has been largely powerless in determining prices.

The argument that rising demand from China and India has determined the upward trend in global oil prices is also unjustified.  While these two countries (particularly China) do account for growing (but still small) shares of global demand, these increases have been counterbalanced by slower demand from other regions of the world, including the United States and Europe.  As a consequence, on average global oil demand has continued to grow at between 1 and 2 per cent per annum over the past five years, usually at a rate slightly below the annual rate of increase in global oil production.

Recent price changes in global oil markets are increasingly affected by other forces that have more to do with financial speculation and expectations than with current movements in demand and supply.  Chart 1 indicates the extent of the recent rise, and shows how much it mirrors the earlier rise in oil prices between January 2007 and June 2008. 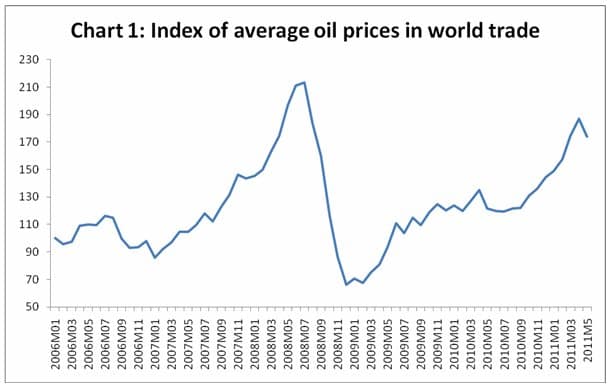 This confirms the points made earlier about the role of other factors in global oil markets.  Clearly, this extent of price volatility — with dramatic rise, fall and rise again within the space of three years — cannot be the result of real demand and supply changes.  Despite this, most sections of the mainstream media persist in trying to isolate some factors affecting production in particular locations to account for the price changes.

The ongoing crisis in West Asia — and particularly Libya — is generally believed to be the impetus behind the latest spurt in prices.  But Libya produces less than 3 per cent of global petroleum output, and Saudi Arabia (whose current excess stocks are already more than the annual production in Libya and Algeria) has already made up current shortfalls and promised to compensate for any future shortfall.  Since the unrest in the Arab region began, there has been no significant change in global oil production, which continues to average around 88 million barrels a day.

In any case, currently the global spare oil capacity is closer to historic highs than to historic lows.  Proven reserves of oil amount to more than 40 years’ worth of global consumption at current levels — the highest such ratio in the past 30 years.

The current price spike is therefore not the result of demand and supply imbalances but is driven by uncertainty, rumour and speculative financial activity in oil futures markets.  Even in terms of expectations, Libya is only part of the problem (and in fact oil production still continues in many Libyan facilities despite the civil war).  The concern in financial markets may be more about the potential endgame if the unrest spreads to Saudi Arabia.  But the increase in oil prices is happening well before such a drama actually plays out and before any serious disruption is caused to global supply.

It is, therefore, likely that the rapid increases in oil price, and the associated price volatility over the past year in particular, are largely driven by purely financial activity.  This is very similar to the effects of financial speculation on other commodity markets such as food items.  The volume of trading in crude oil futures contracts has expanded dramatically over the past decade.  As noted by Robert Pollin and James Heintz (“How Wall Street Speculation Is Affecting Gasoline Prices Today,” Americans for Financial Reform mimeo, July 2011), the overall level of futures market trading of crude oil contracts on the New York Mercantile Exchange (NYMEX) is currently 400 per cent greater than it was in 2001 and 60 per cent higher than it was two years ago.  Even relative to the increases in the physical production of global oil supplies, trading is still 300 per cent greater today than it was in 2001 and 33 per cent greater than two years ago.

The ratio of “open interest” contracts of NYMEX crude oil futures to total global oil production is one useful indicator of the growing extent of speculative activity in this market.  This ratio was between 4 and 6 per cent in the first half of the 2000s, increased to 12 per cent in late 2006 and then to as much as 18 per cent just before the oil price peaked in June 2008.  It then fell to 13 per cent in the middle of 2008, as oil prices fell.  It has been mostly rising since then, with average levels of 16 per cent in the past few months.  Large traders in particular show growing volumes of “long” positions that anticipate future price increases (data from Commodity Futures Trading Commission website www.cftc.gov accessed on July 6, 2011).

While this explains some of the recent volatility witnessed in oil prices, there are some other, more puzzling, features of the recent price increases.  Earlier, the three major forms of crude petroleum in the global market — Brent Crude, West Texas Intermediate and Dubai Crude — generally showed similar if not identical prices.  If anything, the price of West Texas Intermediate oil used to be slightly higher because of its perceived better quality and lower sulphur content.

However, in the very recent past the prices have diverged, and as Chart 2 shows, West Texas Intermediate’s is now the lowest of the three prices.  By the middle of June the difference was more than $22 a barrel.  It is not fully clear what is causing this deviation, especially the increasing extent of it.  But it is also true that futures market activity is greater for both Brent and Dubai crude oil. 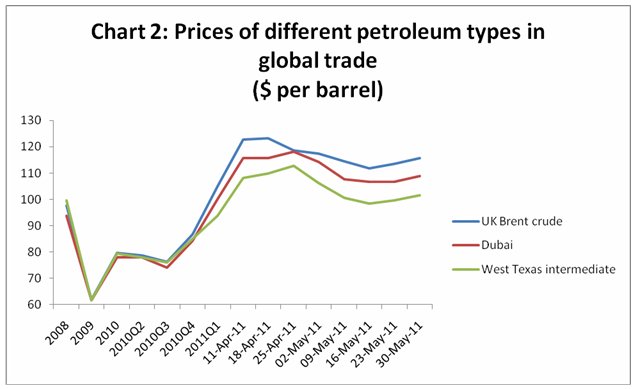 We all know who loses from rising oil prices: most of us.  Oil prices directly and indirectly enter into all other prices, through higher fuel costs of production and transport.  Agriculture is directly affected, so food prices will definitely rise further with this oil price increase, worsening the resurgent food crisis.

Such cost pressures have another consequence: they push governments to inflation control measures, such as higher interest rates.  In many countries this worsens the chances for the already fragile economic recovery after the crisis.  So people across the world face lower real incomes and may face reduced employment opportunities.

So the doubling of the oil price that we have seen in the past year has already destroyed any positive effects of the foreign aid that oil-importing developing countries receive.  Since it is also linked to global food prices, the negative effects are compounded for food-importing countries.  During the last such price peak in 2008, there were calls for compensatory financing to be provided to oil and food importers by the International Monetary Fund (IMF).  This never came about, but this time round we have not even heard such noises, certainly not loudly enough.

Who gains from the rising oil prices?  The conventional approach is to look at the countries that are major oil exporters and somehow assume that they are the beneficiaries of such price spikes and that this leads to a redistribution of global income away from oil-importing to oil-exporting countries.  This approach is reinforced by the media, which keep emphasising the windfall gains of governments in oil-exporting countries.

But this misses the point.  The really big gainers — accounting for the largest portion of the gains by far — are the big oil companies.  In fact, big oil, which suffered a setback during the Great Recession, is back with a bang, riding on the back of the recovery in petroleum prices in 2010.  The major oil companies that announced their results in January 2011 reported a doubling of profits in 2010 compared with the previous year.  The three big U.S. companies ExxonMobil, Chevron and ConocoPhillips together had profits amounting to nearly $60 billion after all costs and taxes.  The profits of the Anglo-Dutch company Royal Dutch Shell also doubled, even though production was lower than expected.

Why do profits of big oil companies increase so much during periods of high or rising oil prices?  Basically, the costs per barrel of the companies reflect their historical costs of drilling, exploration and/or purchase of crude oil, which often have little or nothing to do with current crude prices.  But they are quick to pass on current crude oil prices to consumers in the form of higher prices for their products.  By contrast, they tend to be much more lethargic about passing on the benefits of lower crude prices in the form of lower prices of processed oil.  So increases in crude oil prices lead to enormous windfall gains for these companies.

In the current price surge, therefore, the real (and maybe only) gainers are financial speculators in oil futures markets and the big oil companies that can pass on much more than their own costs in the form of much higher prices due to the general sense of frenzy in oil markets.  So the case for immediate and substantial taxes on the windfall oil profits of multinational companies is very compelling.

And so is the case for much more far-reaching and effective regulation and control of the speculative activity in oil futures and other commodity markets that is currently causing so much collateral damage.

Jayati Ghosh is Professor, Centre for Economic Studies and Planning, School of Social Sciences, Jawaharlal Nehru University, New Delhi, and Executive Secretary of International Development Economics Associates (IDEAs).  This article was first published in the Frontline 28.15 (16-29 July 2011) and republished by MacroScan on 13 July 2011; it is reproduced here for non-profit educational purposes.