No sooner were the results of the 66th Round of the National Sample Survey Organisation (relating to data collected in 2009-10) released, than they became the subject of great controversy.  Surprisingly, the controversy was created not by critics of the government and its statistical system, but from within government circles!

Some highly placed officials found that the results of this massively large sample survey — conducted by one of the most respected governmental statistical organisations in the developing world — contradicted their own presumptions about the pattern of growth of the Indian economy.  Instead of therefore questioning their own priors, they decided that the data must be wrong, and castigated the NSSO for its faulty investigative methods (which they had earlier accepted without question).  Others pointed to specific problems with the data collection in the 66th Round, such as excessive reliance on outsourced contract investigators, even though this is not a very new problem, but rather has plagued the NSSO during several of its recent rounds.

However amusing these official interventions may be, there is no doubt that the results of the latest large survey of the NSSO reveal some very important changes in the labour markets in India, and also in the nature of the growth process that determines these changes.  They therefore deserve to be taken seriously and analysed in detail, including by the same policy-makers who otherwise currently choose to be in denial.

The starkest result relates to the slowdown in overall job creation, which is what has generated the headlines about “jobless growth”.  The NSS surveys are extremely inclusive in their definition of economic activity, trying to capture all kinds of work including self-employed work, part-time work, home-based work, and so on, and therefore it is wrong to think that they automatically exclude work that is outside the formal sector.  Even so they indicate a dramatic deceleration in the rate of employment generation.

The Charts below relate to usual principal status activity, which is the main activity that people declare themselves to be engaged in on a usual basis over the course of the previous year.  They also refer to those above the age of 15 years.  The employment numbers have been derived by applying the participation rates of the NSSO survey of 2009-10 to interpolated population figures from Censuses 2001 and 2011.

Chart 1 shows the dramatic deceleration in total employment growth, from an annual rate of around 2.7 per cent in the previous five-year period to only 0.8 per cent in the latest quinquennium. 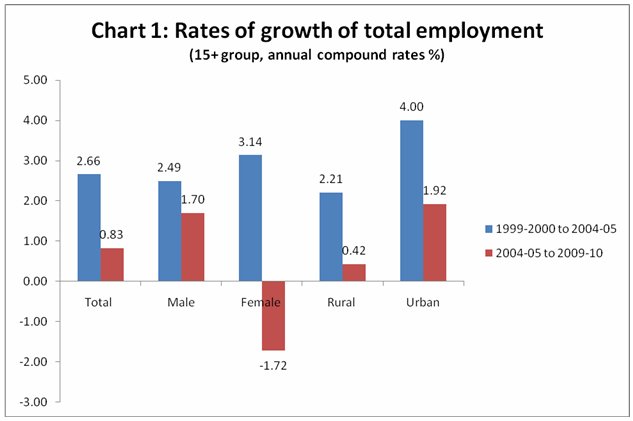 For females, there was an absolute decline in employment — although it is certainly true that this may reflect the lack of recognition of women’s work, since the biggest element of the decline relates to women’s self-employment.  But even male employment shows quite a sharp deceleration.  This slowdown in employment generation is evident across both rural and urban areas, though it was especially marked in rural India.

Nor should it be assumed that the overall slowdown in employment generation is simply the result of less employment in agriculture, which is, after all, a typical feature of a broad process of industrialisation and development.  Rather, as Chart 2 indicates, rates of increase of non-agricultural employment also fell sharply, indeed halved, for all workers taken together.  The collapse was sharpest for female workers.  But even for male workers, the slowdown in non-agricultural job creation was strongly evident. 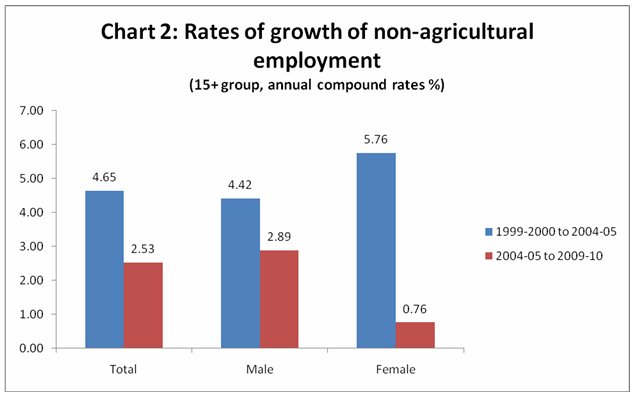 The remaining charts provide evidence on absolute numbers of people, in the 15+ age group, by gender and residence.  These charts include data from the smaller 64th Round of the NSSO, conducted in 2007-08, which was specifically devoted to employment.  This is useful because it allows us to check whether the latest round is, indeed, a significant outlier, or part of a trend that was already emerging a few years earlier.

From these charts, a more complex picture emerges, which clearly needs to be analysed and understood carefully.  It is evident that the latest Round really confirms the trends that were already beginning to show by 2007-08, for most categories of workers.  Therefore, claiming that this round specifically was affected by data collection problems is not so convincing.

Charts 3 and 4 show the distribution of rural females and males respectively, over the recent rounds, in terms of absolute numbers.  For rural females, it is certainly true that self-employment has collapsed, showing a decline of more than 20 per cent compared to five years earlier.  This is obviously a matter that needs to be delved into, not in terms of the adequacy of investigative methods, but also in terms of questioning whether the forms of self-employment that were said to have emerged were really viable at all.  This question becomes significant because it is clear that self-employment has also fallen for rural male workers.  In both categories, the increase has been in casual work. 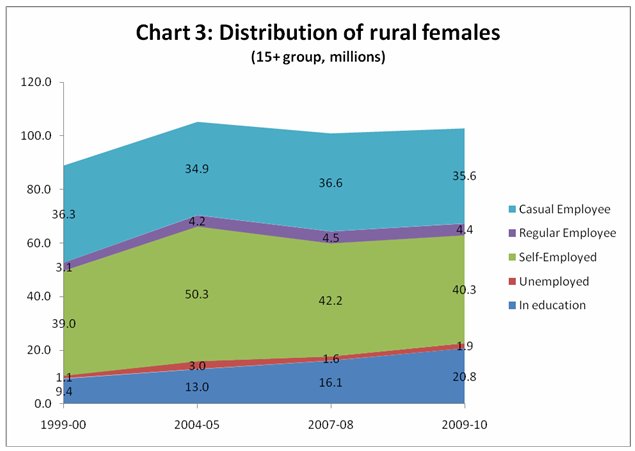 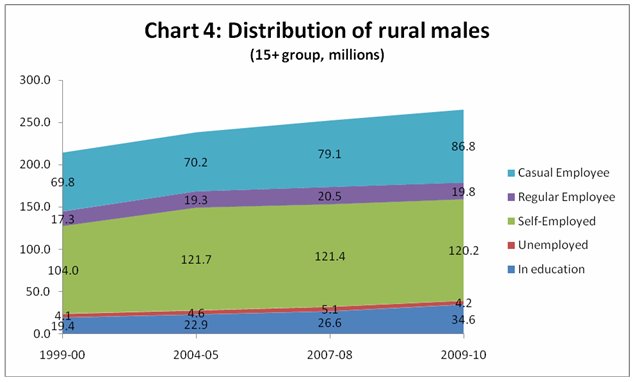 This increase is marginal for rural women (some of whom are likely to have withdrawn from the work-force) but quite substantial for men in rural India.  Regular employment has been largely stagnant.

The good news is that there has been a substantial increase in those engaged in education, for both rural females and rural males.  The increase is really quite significant, around 50 per cent over the five-year period for both males and females, and amounting to nearly 20 million more young people (above the age of 15 years) being engaged in education as the principal activity.

Could this be related to the evident decline in unemployment?  Not really, because it turns out that while unemployment seems to have fallen both in terms of rates and absolute numbers, as is evident from the charts, they have not fallen much for rural males though they have declined slightly for rural females.

In urban India, similar trends seem to be at work, as indicated in Charts 5 and 6.  Self-employment has decreased for both men and women, and, in fact, the decline is significantly more for urban men.  Regular employment has increased marginally for both categories.  However, a note of caution is necessary before such a finding gives rise to even minor celebration. 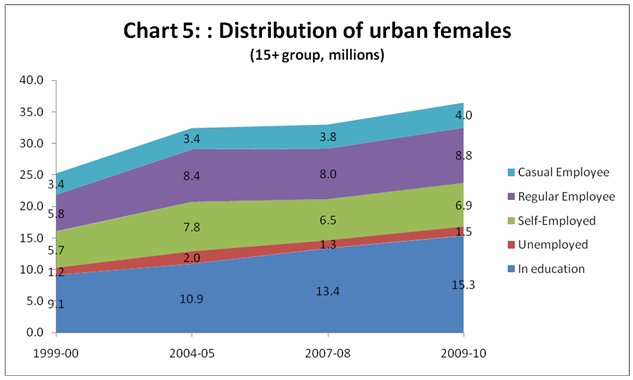 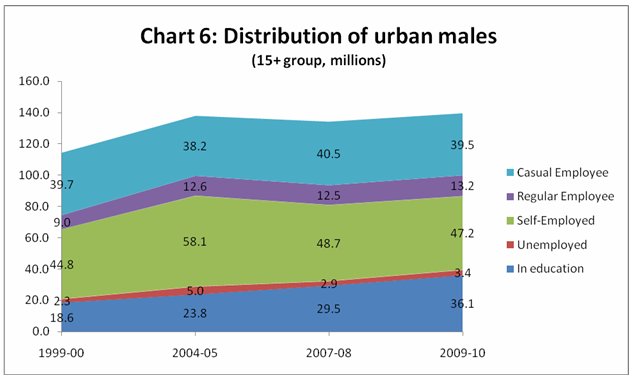 In the previous large survey round, the largest increase in regular employment for urban women was in domestic service, as maid-servants and the like, which is not exactly the most desirable form of work.  So, obviously, further investigation is necessary before we can adequately interpret this trend.

Casual employment for both male and female workers has increased to a greater extent.  Specifically for the age cohort 25 to 59 years for all India, there were around 18.2 million more casual workers, compared to 6.4 million additional regular workers and 4 million more self-employed.  At the same time, unemployment rates appear to have fallen, especially for this age group. The decline in unemployment even during a period of very low aggregate job creation is a paradox that deserves further examination. 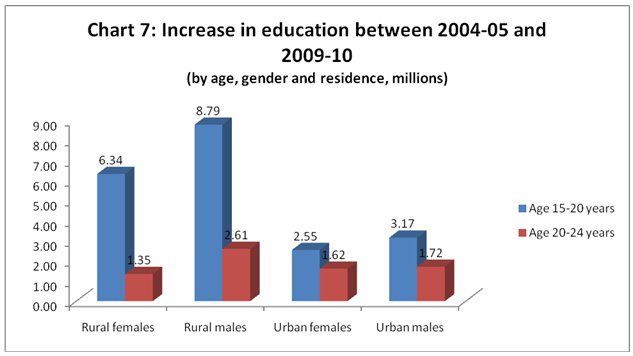 While the biggest increases are for those presumably going in for secondary and higher secondary schooling (in the age group 15 to 19 years) there are also substantial increases in the older age group, suggesting involvement in different forms of tertiary education.  This is good news, of course: the citizens of India deserve to be better educated and the economy desperately needs a more skilled work force.  But it also points to a concern that should surely exercise our policy-makers, if they can bring themselves to look at a dataset that they appear to reject at present.

According to these data, there are nearly 30 million more young people putting themselves through more education in the hope of being able to access better jobs.  The total numbers of such youth in secondary and tertiary education is at least 55 million.  Soon, perhaps even within the next five years, these young people will enter the job market and expect to access employment that is at least minimally commensurate with the efforts they have put in to receive more education.

But in the previous five-year period, all forms of employment (regular and casual, paid work as well as self-employment) only increased by around 28 million.  If this sluggish pace of job creation continues, there will be even larger gaps between aspiration and reality in India’s labour markets.  That such a combination is a recipe for enhanced social tensions and political unrest is well known and has been reinforced by recent experience across the world.  If only for that reason, surely the government should sit up to take notice of its own data?