It is very difficult to explain American politics to those who are not Americans and/or have not lived here long enough.  Add to that the confusion over basic economic principles, and it becomes almost impossible to explain the debt-ceiling debate to rational people.

As noted by James Galbraith, this is not a fiscal crisis, which should be obvious, since it was a Wall Street-driven bubble.  Also, contrary to what you think the Republicans are the big government party.  The graph below shows total federal government spending as a share of GDP (in black), and some spending categories as a share of government spending (in colors).  As it can be seen, total spending goes up in 1981, 1989, 2001, when Republicans assumed the administration, and down in 1993, when Clinton did.  Also, note that even if spending went up in 2009, as a result of the crisis, it did come down in 2010 (which is not a good thing, by the way) with Obama. 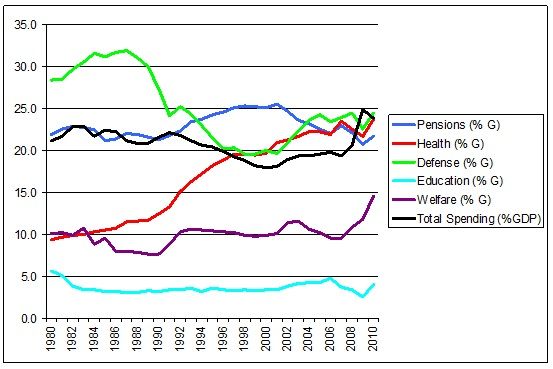 The point is that Republicans usually spend more on defense (the green line) which increased with Reagan and remained the number one spending item until Clinton (even though it started coming down with Bush senior).  Since Bush junior it has become once again the number one spending category.  Note that pensions were the number one item during Clinton, and the real increase since the crisis has been on welfare spending.  So one can say that Republicans represent (by their actual spending) Big Government for the Military Industrial Complex, while Democrats are the small government party for the old and the poor.  Mind you, a more complete story would show that both have also been in the business of deregulation and, hence, are in the pocket of the Wall Street-Treasury Complex.  Finally, note that health spending keeps growing, but not that much during the crisis, and that a reform that reduces costs (e.g. with a public provider) is still necessary.  Overall, spending is not out of control, and if anything, Republicans are for Big Government.

Maybe the problem is on the revenue side then.  The graph below shows income and payroll taxes as a share of GDP.  While payroll taxes have tripled since the 1960s, income taxes have fallen by about one third from their peak (trend in black), in particular in the 2000s, first as a result of Bush tax cuts, and then because of the Great Recession. 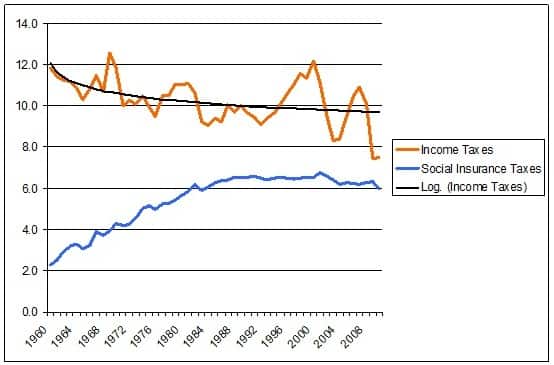 The majority within the three lowest quintiles of income distribution (60 percent lowest) pay more on payroll taxes than income taxes.  Hence, their tax burden has increased.  Add to that the fact that their income has stagnated, while that of the top 1 percent (or even more for the top 0.01 percent) has grown significantly and their tax burden has decreased.  As a result, the 11,000 families at the top of the pyramid (the 0.01 percent that make on average more than US$ 35 million) have a share of income post-taxes almost as high as the 20 percent poorest (pre-taxes they have more), or 24 million families that make on average close to US$ 16,000 (data here).  The top 1 percent has way more than the ones at the bottom (see graph below). 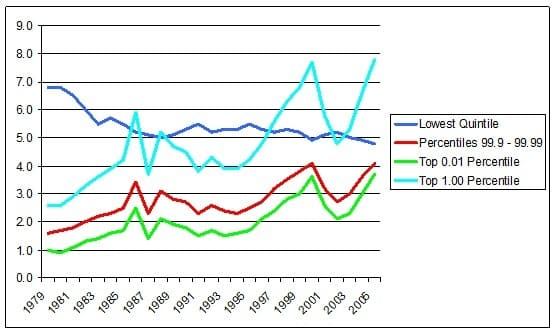 So you ask me: what do all of these numbers have to do with the debt-ceiling debate?  If it were a fiscal crisis, and knowing that government spending is not out of control, but taxes are down because the rich do not pay enough and the poor pay too much, the rational solution would be to tax the rich (and maybe cut some of the spending on defense; a solution for health is more controversial, but not impossible, and certainly does not include dismantling Medicare).  But this is not a fiscal crisis, and the debt ceiling is an arbitrary rule that Republicans are using to extract more benefits for the wealthy, as part of a political agenda that harks back to Reagan.

The US can spend more and accumulate more debt (in fact, it did so during World War II) without any problem, and interest rates will not budge.  The Fed can keep the long-term interest rate low with more quantitative easing if necessary.  Republicans are not trying to solve a debt crisis (which does not exist).  They are just making the rich richer.  You cannot tax job creators, they say (in doublespeak)?  What jobs?!  Somebody should point out that the rich have not created any jobs!

Matías Vernengo is Assistant Professor at the Economics Department and the Latin American Studies Program of the University of Utah.  This article was first published by TripleCrisis on 26 July 2011; it is reproduced here for non-profit educational purposes.