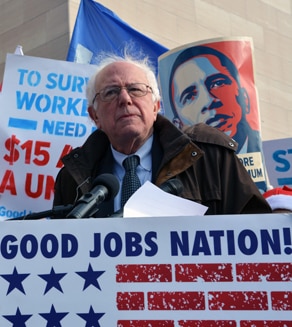 The following is an excerpt from Bernie Sanders’ speech at a meeting of the National Committee for Independent Political Action in New York City on June 22, 1989, published under the title “Reflections from Vermont” in the December 1989 issue of Monthly Review. [wc_highlight color=”red”] —Ed.[/wc_highlight]

It seems obvious to me that there is no way that we can deal with the enormous economic, social, and environmental problems facing this country without making radical changes in the economic system, and we’ve got to be honest about that.  I believe that democratic socialism is the appropriate framework for making those changes, and we should be upfront about our beliefs…

When the rich are getting richer while the poor and middle class are getting poorer; when the standard of living of the average worker is in rapid decline; when people can’t afford health care, can’t afford housing, can’t afford to send their kids to college, and the environment is being destroyed for quick profits, when you put it all together, what do you have?  You’ve got a disaster.  And the people understand that.  They know what’s going on, and they want a movement which will speak to these issues, the issues that are wrenching out the guts of this country, but which the Democrats and Republicans and the corporate media will never honestly deal with.

Now, who do we hold responsible for these problems?  I know that’s a strange question, very rarely asked, but let’s pursue it.  Well, what’s in vogue now, you see, is: “Gee, that Ronald Reagan was a terrible president, what a reactionary guy.”  Well, he was.  But let me give you some interesting news that most of you already know.  Throughout the eight years of the Reagan presidency another political party, it’s called the Democratic Party, controlled the U.S. House of Representatives, controlled every important committee in the House of Representatives.  For six out of the eight years of the Reagan presidency the Democratic Party controlled the U.S. Senate.  The “Reagan Revolution” was not brought about by Reagan and the Republicans.  It was brought about by Reagan with the active support of the Democratic Party.  It was a truly bipartisan effort.  Democrats and Republicans working together — protecting the interests of the rich and the powerful.

Now what I think is crying out in this country is the need for a new political movement which talks truth and common sense to the ordinary people.  I often speak on campuses and other places around the country, and the disgust with the two-party system is incredible.  Very, very few people have faith or belief in either of those parties.  People will vote for one of their candidates because they’ll say that this guy is better than that guy, but it’s very much a question of the “lesser of two evils.”  The people know that the present political system is failing.  They want an alternative.

Now I know that there are people, good and honorable people, people who are friends of mine, who believe that the Democratic Party can be turned around.  I don’t.  I believe that what we have got to do right now is create a progressive, independent political movement which brings together all of the single-issue groups who are currently banging their heads against the wall.  The unions, the minority groups, the women’s organizations, the environmentalists, the senior citizens, the youth, the peace activists — and all the people who know that we need fundamental change in this country.  More than anything, I believe that we’ve got to bring those people together and articulate the real reality of America — not the TV reality.  We’ve got to make people understand that the enormous problems that they are facing are not primarily personal problems, but social problems.  Further, we’ve got to articulate a democratic vision which is based on social justice, peace, and respect for the environment.

Now the argument, and I’m sure that we’ll discuss this later on because some of you will disagree with me, the argument for working within the Democratic party is that, presumably, that’s where the people are.  You’ve got to go where the people are.  All I can tell you is two things.  In Burlington, in Vermont, the people have shown that they are not dumb.  They can read and they can think and they are quite capable of voting for someone who is not a Democrat or a Republican.  They discovered that their fingers didn’t fall off when they pulled the lever for someone outside of the two-party system.  People can do that.  Not only in Vermont but all over the country.  It is absurd to believe that, for some mysterious reason, people will only vote for a Democrat or a Republican, and that we will always have to support the two-party system.

Secondly, and equally important, if we are interested in getting people excited about politics and the possibility of real social change, how can you do that within the Democratic Party?  I think that it’s impossible to get people excited, to get people motivated, when you say to them, “Come on into the party of Jim Wright, Lloyd Bentsen, and worse.  We’re really going to change things around and here’s my good friend Lloyd Betsen.”  You can’t do it.

I’m not here to tell you that I have a magic solution to the problem and that everybody else is a jerk.  I have no easy solutions.  Nobody does.  There are enormous obstacles that will have to be overcome if we are going to build a successful third party.  But I do believe this: Winning elections tomorrow is important, but it’s not necessarily the most important thing.  In a country which has such a low level of political consciousness; in a country where the level of political “debate” is so pathetically low, it is absolutely imperative that the progressive movement raise the issues and the analyses which will educate the people of our nation to begin to understand what the hell is going on.  And I honestly don’t believe that that can take place within the Democratic Party. . . .

To my mind, it is absolutely imperative that we build an independent, democratic socialist left which has the guts to raise the issues that all of us know to be true, but which are very rarely even discussed within establishment politics.  Our major task is to change the entire nature of political discussion in the country.  In my view that’s just not going to happen within the Democratic Party.  It seems to me that if you add up all of the people who are getting a raw deal from the system today you’re talking about a majority of the population.  That’s our potential constituency, and I think we’ve got to form a political movement which brings these people in.

To read the full text of the speech excerpted above, subscribe to Monthly Review.  Click here to read a preview of the Notes from the Editors in the December 2016 issue of Monthly Review.