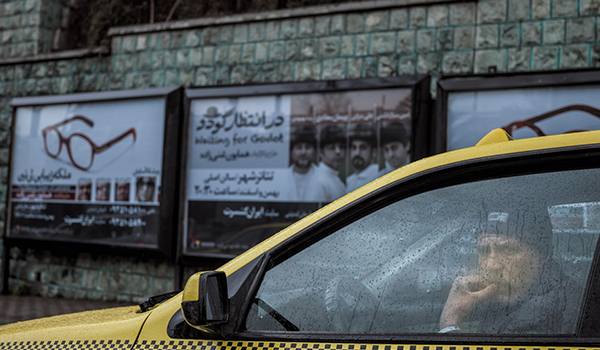 A taxi driver in his car on a rainy day. Behind him a poster of an upcoming performance of Samuel Beckett’s play “Waiting for Godot.” (© Newsha Tavakolian for the Carmignac Foundation)

Russia’s strategic alliance with Iran is at the heart of global tensions, and the speed and ferocity of statements by the new U.S. administration do little to allay concerns. A fresh wave of sanctions hit Iran in January of this year while a team of Iranophobic warmongers, put Iran “on notice.” Meanwhile, a top aide to President Trump told Fox News, “I pray to the good Lord that the mullahs, the power center of this theocratic dictatorship, understands [sic] that they can’t go on with business as usual.” The crusading language of the new U.S. administration is alarming; this language has an interlinked relationship with promotion of “Iranophobia” in the West. Once again the narrative that the Islamic Republic is on the verge of producing nuclear weapons with which it will target Israel and set off an unprecedented Middle Eastern arms race, strives to dominate the public sphere. “State sponsor of terrorism” is the familiar language for any nation/political system that challenges U.S. hegemony.

The Language of Washington

Washington’s new chapter of hostilities were apparently prompted by a purely defensive missile test by Iran with a relatively short range on January 31. As has been mentioned by experts, a ballistic missile test does not necessarily entail any connection with a nuclear program. According to the UN Resolution 2231, page 99,”Iran is called upon not to undertake any activity.” It clearly says that Iran is “called upon,” not “prohibited” and it has to be directly associated with a nuclear program to be a violation of this Resolution. There is nothing about prohibition in the UN statement.

Having confirmed Flynn’s statement, on February 2, White House Press Secretary Sean Spicer mentioned “Iran’s additional hostile actions” against “our Navy vessel.” The clear evidence shows that he is lying. The recent actions Spicer referred to were not against an American ship, but a Saudi ship, and it was not the Iranians. It was the Houthis. The attack was carried out by Houthi militants in Yemen with a guided missile against a Saudi navy vessel.

It would be naive for one to take the aforementioned contradictions in the statement of Press Secretary as some inadvertent error. The nature of these statements is reminiscent of crusading language Washington used in the lead-up to the Iraq war in 2003. Having striven to get out of the quagmire of Iraq and Syria, it is hard to believe that Washington is going to fall into the trap of a full-fledged military intervention in Iran, though the beginning of the drum beats of some form of warfare against Iran is evident.

President Trump on Monday February 27 told a group of governors gathered at the White House that,”we have to start winning wars again,” arguing “we don’t fight to win.” Despite the crusading language of the insane clown President, in the grand scheme of things, the Trump administration is likely not going to push a direct aggressive military action against Iran. Pushing the current pressure to the extreme level is probably the main policy and the order of the day. In light of the fact that Trump’s administration does not believe in smart power, Clinton administration’s “dual Containment” of Iran is now on the table. Although the origin of the dual containment policy, goes back to the Carter administration, it was first outlined in May 1993 by Martin Indyk at the Washington Institute for Near East Policy. Clinton’s team saw Iran as a “rogue state” fundamentally opposed to American interests in the Middle East. Clinton’s objective of dual containment was to isolate “the hostile regimes” politically, economically, and militarily. Donald Trump can be expected, explicitly or implicitly, to act in a similar fashion.

Among the different parameters of dual containment policy which is now traceable in Trump’s policies, three of them are significant. The first is about balance of power in the Persian gulf in favour of the U.S. policy. The second one is preventing the regular diplomatic and commercial relations between Iran and the world. The third is less investment on taking advantages of the conflict of interests among the different political factions in the Islamic Republic (known as “moderate versus hardliners” in the MSM.) 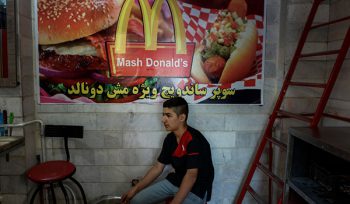 At Mash Donald’s in Tehran, almost everything resembles its American counterpart — everything except the food. Credit Newsha Tavakolian for The New York Times

Meanwhile, a group of “Iranian dissidents” led by the Persian-speaking “Iran experts” of hawkish American think-tanks such as the American Enterprise Institute and the Foundation for Defense of Democracies, wrote an open letter to Trump to beg him to sanction their own people. At the same time, Michael Ledeen, the neoconservative historian and the godfather of many of these “Iran experts” beat the hollow drum of regime change.

As a matter of fact, the warmongers against Iran are pretty “diverse.” From those who simply had their pockets lined by the MEK like Giuliani and Elaine Chao, to the son of Iran’s last monarch. In an exclusive studio interview with VOA’s Persian Service, Reza Pahlavi appealed to U.S. President Donald Trump to push for possible “regime change” in Iran. The coups in 1921 and 1953 brought his father and grandfather, as Shahs, to power—the dictators who ruled the country until their overthrow in the historical 1979 incomplete Revolution. The uncrowned billionaire prince called blatantly for reactionary Persian Gulf Arab states to join the club of “democracy promoters” in Iran, in the hope of a similar style Western intervention.

Nevertheless, one has to bear in mind that “regime change” is a continuation of a strategy enacted by the Obama administration against the current neoliberal theocracy in Iran. The Iran Nuclear Deal, which was never a peace deal, is only part of the “peaceful” approach to install a government in Iran that is friendly to the West. Ilan Goldenberg, a former high official in Obama’s foreign policy brain trust lately called the deal as “Obamacare of foreign policy.”

Having said that, “We’re still dropping bombs as we were at the end of the Obama administration in six countries in the Middle East (Afghanistan, Iraq, Syria, Libya, Somalia and Yemen according to him),” acknowledging that as much as the U.S. does not rely on oil, the world economy still relies on oil, “it’s one international market, and the United States forces still underwrite the basic security of the the sea lanes that send that oil and trade out of the Middle East and also connect Europe and Asia overall…” The “expert” at Center for a New American Security which is the heart of liberal interventionist Democratic foreign policy is completely right when he conceded that, “Donald Trump might want to rip it up, but he can’t, too much is now dependent on it.”

However, despite the Islamic Republic’s flexible and accommodating concessions in this historic sellout pursued by the Obama administration, the aggressive policies against the country continue. The previous administrations, both those of Bush and Obama, imposed crippling sanctions to bring the people of Iran to their knees. The Obama administration suspended part of these to pursue a smart power agenda with Iran, which surrendered its sovereignty and subjected itself to the colonial oversight of an imperial power. Now, the fresh wave of sanctions against Iran by the Trump administration, this can only be understood as the continuation of a U.S. strategy aimed degrading Iran’s military defenses and securing major neo-liberal reforms.

The Hazards of the New Sanctions for Iran

All things considered, the current dangerous rhetoric against Iran has to be taken seriously. U.S. capitalism in crisis is a classic example of war at home and war abroad. Hence, Trump’s sophisticated propaganda agenda and the way liberals are playing the game, designed to distract public opinion from the contemporary moral and economic crisis of the U.S. capitalism. Therefore, remembering when the Bush-Cheney administration came to power and the similarities and differences in terms of geopolitics, one cannot underestimate the ramifications of the new sanctions on Iran. Iran’s militarized casino capitalism networks (the IRGC and its affiliated organizations) which tried to facilitate Iran’s oil revenue hindered by the sanctions, will face difficulties dealing with the new situations. Most of IRGC’s money laundering networks have been recognized by the UN. It is not yet clear if the IRGC would be able to use its front companies and banks to cash in after the new sanctions are imposed on Iran by the U.S.

On the one hand, Iran’s maneuvers are limited due to its commitment to “the Iran Deal,” and on the other hand, lack of consensus within the EU to side with Washington’s in its brawl against Tehran can make Trumpeting for Iran nothing but lots of shouting, with a tiny stick.

Bibi in Washington; The Main Enemy at Home

Bibi’s conciliatory message to “the people of Iran” in January 21 triggered the new wave of anti-Iran hysteria in the Trump administration. The prime minister of Israel—“the only democracy in the Middle East” and “world capital of homeland security industries”—went on to say he wants Iranians to enjoy “Western freedom and liberties…. I know you’d want to be able to speak freely, to love who you want without the fear of being tortured or hung from a crane.” Meanwhile, during his visit to White House in February 15 , Bibi confirmed that, “Israel must keep security control of all territory west of the Jordan River.” Netanyahu reiterates that what he means by “Palestinian state” is an entity under Israeli occupation. It would be naive not to see the link of the new wave of U.S. hostility towards Iran and the last nail in the coffin of the so-called “two-state solution.” The new wave of Iranophobia is derived from exaggerated and displaced strategic concerns in the era of the “war on terrorism.”

With Obama in office, the anti-war movement almost disappeared from U.S. streets; meanwhile, the “war on terror” is going to stretch into a third decade, with no foreseeable sign of a conclusion. Karl Liebkenecht’s famously advised that “the main enemy is at home“: indeed, the urgent need for a new anti-war movement inside the U.S. feels more essential than ever.

Soheil Asefi is an independent journalist and scholar. He studied Political Science at The New School for Social Research(NSSR) in New York, and is a Ph.D. student in History program at the Graduate Center, City University of New York (CUNY.) His research focuses on the history of Iranian Red Diaper Babies, political socialization, and queer diaspora and political agency in Germany and US. Asefi left Iran in 2008 after a ten-year professional experience in major Iranian media outlets. He was arrested in 2007 and spent most of his incarceration in solitary confinement in 209 ward of Tehran's notorious Evin Prison. He was released on an unprecedented amount of bail for a journalist at the time and barred from continuing his professional work and education in the country. Asefi was the guest of the city of Nuremberg under German PEN project “Writers in Exile.” He is the recipient of the prestigious German Hermann Kasten award in Nuremberg. While in exile,he has written extensively on the politics of belonging, imperialism and the dimensions of democratization and neoliberalization in the Middle East, particularly in Iran today. He can be reached at sasefi@gradcenter.cuny.edu