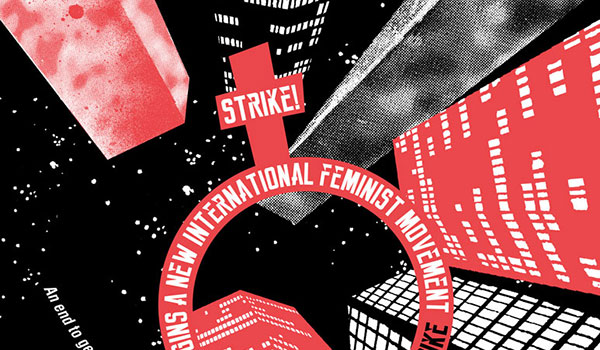 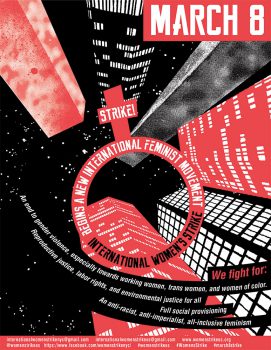 On International Women’s Day, 8.3.2017, at five to twelve: stretch out your hand and form a women’s council.

Something new is taking shape in the world: in more than 30 countries, people are calling for an international women’s strike on the 8th of March. Already last autumn, major protests took place against the destruction of women’s rights in Poland. In Argentina, a strong movement has formed against the murders of women and the violence of debt and economic exploitation, which is resonating across Latin America. Following the inauguration of Donald Trump as US president, the world watched in amazement as huge numbers of women and their supporters demonstrated on the 21st of January.

We, too, live in a country which is far too closely modeled on the principles which Trump embodies. We may not have a “Muslim ban”, but immigrants are deported from Germany to war-zones such as Afghanistan. We may not be building a wall on the southern border of Europe – the Mediterranean is already there. In our country there are whole regions which are highly unsafe for people who are not considered to “pass” as white. And women and children often think it is normal for them not to be able to move about fearlessly in public – while in fact, many of them also suffer from violence within their families and households. But it is also through our experiences of everyday and institutional discrimination, dismissive attitudes and exclusion that many of us have come to realise that emancipation is still to come. We may not be ruled by authoritarian rightwing populists, but these populists do have a presence in German politics. They create an atmosphere in which attacks on refugees and Muslims are part of everyday life and media witch-hunts are launched against progressive voices (against feminist gender studies, for instance). All of us inhabit a planet which is gradually growing warmer – a planet with limited resources. We might be horrified when Trump denies climate change and shows little interest in protecting water, air or eco systems, but we know all too well that our whole economic system is based on this kind of destruction. Capitalism treats everything as a potential resource which can be used and exploited. Presumably, there are well-meaning businesspeople who don’t want to treat our world that way. But they, too, find themselves forced into a situation in which they can lose out to the competition of those who have fewer scruples, for whom nothing sacred is, or who simply own such big businesses that they have the power to dictate the conditions to everyone else.

As workers and employees, jobbers, temps, freelancers and academics, as doctors, farmers and craftspeople, as people who are harassed by the authorities for not being in work or not being able to work, as pupils and students, we know that what we do almost always serves to keep a machine moving in a direction we don’t agree with. We have to work in order to cover our rising rent and our crumbling pensions. We have to work to provide for ourselves and those who depend on us. Even when we believe that what we are doing is meaningless or wrong, we have to confront the daily fear that our jobs will be cut. Even when there is no work for us, we have to behave as if we were looking for it constantly. The extra work which women and other carers do in order to look after those who depend on them has still not been given proper recognition. That work is extorted from us at the expense of our own strength, at the expense of our careers and at the expense of all the things which we can no longer take care of on top of everything else – or it is passed on to other, less well-paid women, often immigrants. The women’s strikes stand for a feminism of the 99%. The issues which affect women are general issues. Women are so diverse in terms of background, skin colour, sexuality and even sex, that this movement can take on the full revolutionary legacy and carry it forward. Women recognise where violence rules, because they and their children experience it often enough. Women know where work is exploited, because as workers they carry a double load and are paid less.

When we call for a “Day without women” on the 8th of March, we do so because we are indispensable. And because we are indispensable, we do not want to devote our work, our strength, our care to propping up and patching up a world in which new life is ground down in competition and the drive for profit, a world which rests on the idea that some lives are worth more than others. On the 8th of March, we not only want to turn our backs on the work which forces us against each other or remains invisible. We want more. We want to turn towards each other and spend a day finding out what it would mean to come closer to the world in which we want to live and in which our descendants and the descendants of other species can live.

The women’s strikes have invented a new sign. Hold out your right hand. Turn your palm up, stretch your fingers slightly and bend them, as if you were balancing a sphere on your fingertips. A sphere, or a pumpkin, a globe or a little head. Look around you. Regardless of where you are – in the street, at home, in a crowd, traveling, in the office, in the yard, in the workshop, in the factory, in a cafe, in the canteen. Look around you. Maybe someone will return the gesture. Look at her. Lift your hand a little and turn the tips of your fingers towards hers. Between you, you could old a ball, a sphere… with enough of us, the whole world. Keep looking around you. Maybe more people will join. Gestures are contagious. If you were the one to stretch your hand out first, you should chair the discussion. You have started a conversation. A women’s council. Just as your fingers were turned towards each other when you made the sign, you’re now standing in a group together. You form an assembly. Much more spontaneous, much more coincidental, but still beginning with your hand.

Such meetings, even if they only last a few moments at first, have the power to create the world afresh. Talk about your wishes and your needs. Talk about your wishes for the world and the needs of the world. Talk about the most urgent problems and how you could solve them together. Listen to each other. Listen to those whom you understand the least; listen to those who otherwise have the least to say. Imagine how you would live together respectfully in the world. Then fight to make that possible.