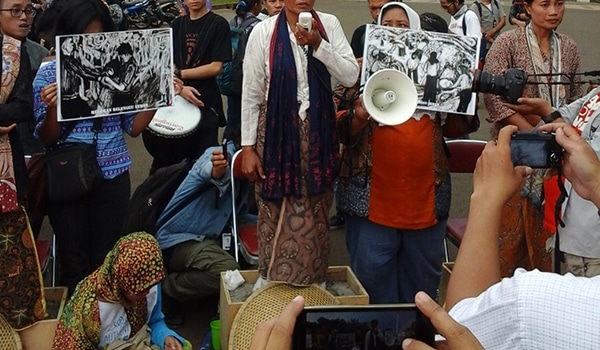 Iqra Anugrah examines a dramatic demonstration in Jakarta that saw peasant women concrete their own feet for 36 hours to save their farms and local environment from a cement factory.

The accelerating rate of land and resource dispossession in post-authoritarian Indonesia has led to a number of confrontations between state and corporate authorities on one side and peasant communities on the other.

Many of these conflicts, though garnering much attention from sympathetic activists, remain localised. However, there are moments when peasants and their activist allies decide to scale up their direct action.

This can be seen in the recent protest of nine female peasants – famously known as the Kartinis – from Rembang regency in Central Java. After travelling over 500 kilometres to protest in front of the State Palace in Jakarta, they decided to cement their feet in opposition of the ongoing construction of a cement factory by the state-owned PT Semen Indonesia in their hometown. 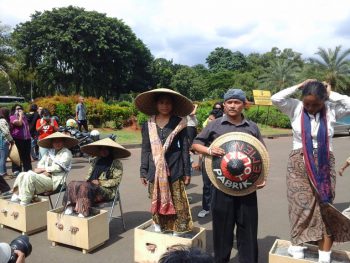 Female peasants protesting in front of the state palace, day 2. All photos supplied.

The purpose was to halt the construction of the cement plant and have a dialogue with President Jokowi. It is a part of their longer-term strategy, stretching back to the early days of the plant’s construction in June, 2014. Approximately 680 days have passed since then.

According to Joko Prianto aka Prin, one of the protest coordinators, for almost two years protesting citizens have faced all sorts of threats and persecution from authorities, including being threatened by police and military officers as well as hired thugs. This time, they decided to voice their grievances directly in front of the State Palace because they felt that the government did not pay enough attention to their cause — in fact, the protest site is very near to the famous Kamisan human rights weekly demonstration held every Thursday.

The latest act was not their first demonstration in Jakarta. Last year, the citizens also staged a protest in front of the palace by making noise using alu and lesung – the traditional rice grinder and its mortar. 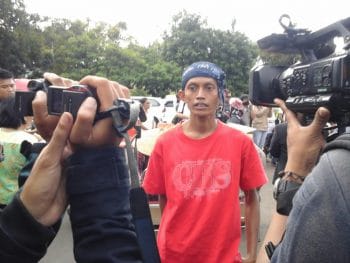 I had the privilege to observe and participate in the second day of this historic protest on Wednesday, 13 April. This session lasted until 5.50 pm, when the protesters decided to break the cement blocks off their feet.

Organisations whose representatives and activists were present included the Jakarta Legal Aid Foundation (LBH Jakarta), the Alliance of Indigenous People of the Archipelago (AMAN), the Commission for the Disappeared and Victims of Violence (KontraS), Migrant Care, the Indonesian Labour Union of Transportation-Struggle (SBTPI), the Confederation of All-Indonesia Workers’ Unions (KSPI), IndoPROGRESS, Perempuan Mahardhika, Jaringan Gusdurian, Politik Rakyat, and the National Student League for Democracy (LMND), among others.

Representatives from the National Human Rights Commissions (Komnas HAM) and the National Commission on Violence against Women (Komnas Perempuan) were also present. Despite their different emphases, these speakers essentially underlined similar points: the importance of peasant livelihoods, the rights of local communities as citizens, and environmental sustainability. 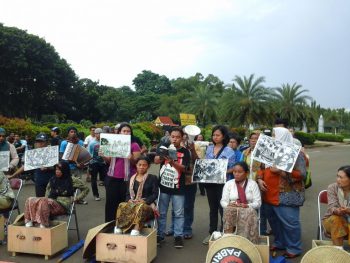 A protester reads a poem.

Two national MPs, Irma Chaniago from NasDem and Siti Mukaromah from the moderate Islamic PKB, were also present at the protest site and expressed their support for the protesters. On the first day of the protest, two high-ranking state officials, the President’s Executive Office Chief of Staff Teten Masduki and the Minister of State Secretary Pratikno also paid a visit to the protesters. Activists took this gesture with a grain of salt. Some even greeted it with suspicion. Considering the government’s continuing lack of attention to agrarian issues, such a critical stance is understandable.

But nothing is more powerful than the message from the protesters themselves, who reminded the establishment about the destruction that the cement plant will bring to their livelihood and the environment.

It is important to note however that despite all the excitement, the protesting crowd remained relatively small. Many of the sympathetic activists and middle-class allies, who knew about the protest from word of mouth and social media, know each other. Perhaps this is indicative of the lack of public awareness of the severity of agrarian problems in contemporary Indonesia.

This lack of public awareness notwithstanding, the acuteness of agrarian conflicts in post-authoritarian Indonesia has increased in the last seven years. According to the Consortium for Agrarian Reform’s (KPA) 2014 year-end report, during the second term of the Yudhoyono Presidency (2009-2014) agrarian conflicts involving peasant communities and state and corporate authorities had increased more than five times, from 89 cases in 2009 to 472 cases in 2014. These conflicts spanned across an area of more than 2.8 million hectares in 2014.

KPA also reports that throughout 2015, the first year of Jokowi’s presidency, there were at least 250 cases of agrarian conflicts in an area of 400,000 hectares. A series of working papers from another agrarian studies think-tank, Sajogyo Institute, also records different forms of multi-layered dispossession in numerous rural communities throughout Indonesia. This does not mean that success stories of peasant struggle are entirely absent. However, success stories remain few in number, and small and local in scale. 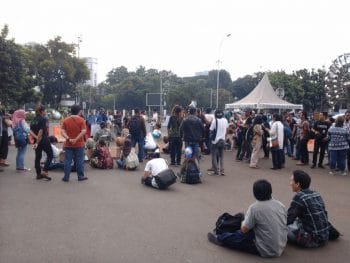 Atmosphere at the protest site.

Given this bleak situation, the only logical collective response from Indonesian agrarian and peasant movements seems to be to build lower-class social movements and multi-sectoral alliances with other marginalised social forces. With the fragmentation and patronage that characterises Indonesian civil society, efforts to build such a movement are a Herculean task. But it is not totally impossible.

The courageous and exemplary action of the female peasants of Kendeng Mountains – the Kartinis – are an important step to revitalise peasants’ struggle for livelihood. While their small act of protest does not necessarily change the current situation, it at least keeps the struggle alive.

Iqra Anugrah is a PhD candidate in Political Science and Southeast Asian Studies at Northern Illinois University. He writes his dissertation on the politics of elite-peasant relations in post-authoritarian Indonesia. He is also an editor for IndoPROGRESS, an online journal connecting progressive scholars and activists in Indonesia.