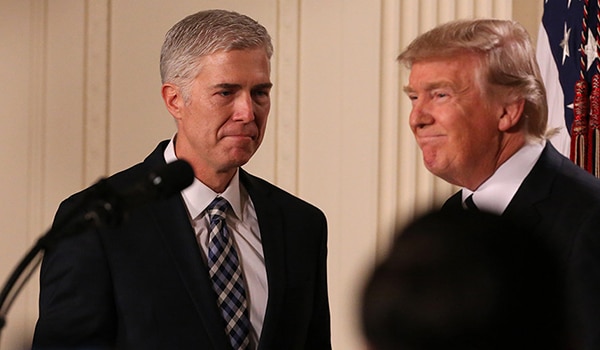 Donald Trump has nominated Neil Gorsuch, a judge of the U.S. Court of Appeals for the Tenth Circuit, to be an Associate Justice of the Supreme Court. The Senate should not confirm Judge Gorsuch. This post gives one cardinal reason for rejecting the nomination.

In 2014, Oklahoma officials botched the execution of Clayton Lockett, by using unauthorized execution drugs, an unauthorized execution drug protocol, fumbling the insertion of intravenous needles, and in other significant ways. Lockett suffered, cried out, writhed in pain, and eventually died, probably of a heart attack. After this chain of deliberate illegalities and incompetence, Oklahoma officials sought to cover up the truth of what had happened. (The story of Mr. Lockett’s execution can be found here.)

Mr. Lockett’s family sued the State of Oklahoma and the responsible officials, claiming that the execution constituted cruel and unusual punishment. The federal district judge dismissed the complaint under Federal Rule of Civil Procedure 12(b)(6), for failure to stae a claim. That is, the judge upheld official immunity from suit without hearing any evidence, holding only that the family’s complaint could not possibly be the basis for liability.

Meantime, authoritative commentators had analyzed official records and eyewitness accounts.   The execution was discussed in judicial opinions. Anyone who spent a few minutes of research would know that there was plenty of evidence out there that supported the family’s claims.

The court of appeals panel that reviewed the dismissal consisted of Judges Phillips, Gorsuch and Moritz. Judge Gorsuch signed on to an opinion authored by Judge Phillips. The opinion is here: 841 F.3d 1098 (10th Cir. 2016).

In this opinion, Phillips and Gorsuch:

The Phillips/Gorsuch opinion demonstrates a casual indifference to human suffering. Judges, particularly appellate judges who see only a printed record of proceedings of a court below, are tempted to think and speak of lofty principles – such as constitutional right and official immunity, and to ignore the human situations that are embodied in the cases before them. This Olympian perspective has been denounced by many, including Judge Jerome Frank who once reminded us that “the law is not what it says but what it does.” You can also find more on this topic by searching this blog for Judge Daughtrey’s opinion in deBoer v. Snyder. We want judges who care about the human condition.

Judge Gorsuch wrote a book on assisted suicide in which he said “”human life is fundamentally and inherently valuable.” There is no hint in the Lockett opinion of that noble sentiment.
The Phillips/Gorsuch opinion is also jurisprudentially illiterate.

The Model Penal Code definition of second degree murder includes a killing committed with “depraved indifference to the value of human life,” or in some versions “depraved indifference to human life.” This legal standard does not expressly govern the Lockett litigation, but it provides important guidance on the kind of indifference to life of which the law should take notice. Here of course, the intention was to cause death. The indifference was to the unreasonable and very high degree of risk that the death would be cruel, unusual, and painful – a form of torture. The point is that in any other case, the judges would view the chain of events as evidence of an indifference so great as to amount to intentional conduct.

In the law of crimes and tort, one is held to the foreseeable consequences of one’s conduct. The chain of illegality leading to this execution, and the cover-up afterwards, provides exactly the sort of circumstantial evidence that in any other case would lead judges and juries to find that the defendant acted with knowledge of the wrongfulness of his or her conduct. Indeed, the 10th Circuit pattern jury instructions even contain the “ostrich instruction” on willful blindness.

The reader can consult any hornbook on crime or tort for more information. The point here is that the blindfold on Lady Justice came off in the Phillips/Gorsuch opinion. The court disregarded procedural rights, ruled on a truncated record, twisted the rules on admissibility of evidence, and ignored basic principles of liability.