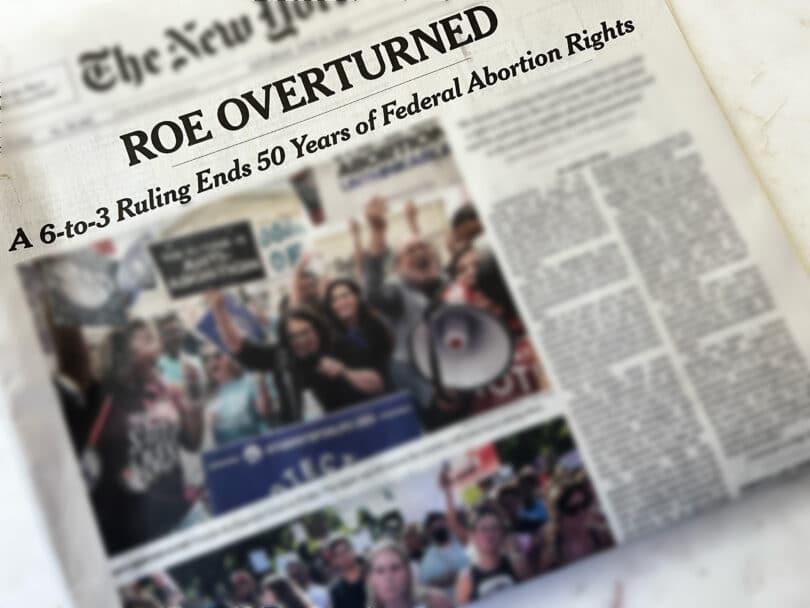 Michael E. Tigar is a human rights activist, lawyer, and law teacher. He has been a human rights lawyer for fifty years. Monthly Review Press published his memoir, Sensing Injustice in 2021. Other relevant work is in the source note.

The Supreme Court Justices have left town for the summer. Their sense of justice departed a few months ago, along with their fidelity to the history and text of the Constitution.  Trumpeting — and there is a good word for these horrors — the alleged original intent of the Constitution’s Framers, the majority of Justices, not only denied a woman’s right to control her own body, but refused judicial review to a variety of evident injustices, while mangling the constitutional text respecting control of firearms.

In this essay, I trace a common theme in these and a series of other assaults on human rights and abdication of judicial duty. I have put relevant source material into a “source note” at the end. The Roe opinion, authored by Justice Alito and leaked to the press weeks ago, says the Constitution makes no mention of abortion, and then goes on to collect laws and rulings limiting women’s rights from the sixteenth century onwards. This farrago of assertedly “originalist” analysis is one of the stupidest and most ahistorical bits of writing in Supreme Court history that includes, one must recall, the Dred Scott case dictum that African Americans have “no rights that a white man is bound to respect.” A brief look at the constitution itself, and the historical context of its adoption, shows why the Court’s majority is constitutionally illiterate.

The Reactionary Six Justices, “or R6,” including Roberts, Alito, Thomas, Barrett Kavanaugh, and Gorsuch (there are defections and additions in some cases, but these are the core actors):

The United States Constitution was written by men who had recently overthrown a monarch: as the British soldiers surrendered to the revolutionary army in 1781, the band played “The World Turned Upside Down.” They could see and hear that “the world” had this distressing habit of upended received verities. And although these revolutionary leaders were all white men of property, they understood that the constitution they were going to draft would inevitably be interpreted and reinterpreted in light of new and renewed historical understanding. Their speeches and writings display a deep understanding of history, and of their own place in history. They did not have the static R6 view that the infamies of yesteryear should be disinterred and sit crowned on the grave of dead and decaying ideas. In the early nineteenth century, James Madison wrote:

What a metamorphosis would be produced in the code of law if all its ancient phraseology were to be taken in its modern sense! And that the language of our Constitution is already undergoing interpretations unknown to its founders will, I believe, appear to all unbiased inquirers into the history of its origin and adoption.

The Framers of this Constitution, despite certain well-known failings, embodied a historical tradition of interpretation, and held fast to a theory that judges must stand between the exercise of state-sponsored injustices and the rights of people. This historic interpretive tradition was laid down in the 1600s by the lawyers whose work refashioned English legal ideology in the English Revolution. Those lawyers used the old texts to adorn and support the innovations that history and a freshened sense of justice required. As Edward Coke wrote, “from the old fields must come the new corne.” Thus, the R6 recital of all the injustices that the eighteenth and nineteenth centuries could and would do to a woman’s right to control her own body represents a deliberate and cynical betrayal of the Framers’ original understanding and not a faithful application of it.

THE BROKEN PROMISES OF JUDICIAL REVIEW

The second element of the Framers’ understanding was that an independent, courageous judiciary would stand ready to resist and correct trespasses on the people’s rights. The R6 reactionaries avoid their duty through three principal types of dishonesty:

R6 cast aside the primary task of respecting the weight of precedent. “Precedent” is not a good thing in itself, but in the nearly 50 years since Roe was decided, many intelligent and thoughtful Justices have examined and upheld it. To cast aside their insight, in an opinion that pays their work no respect, nor addresses the concerns that led those Justices to rule as they did, is at odds with a centuries-old judicial tradition. This omission gains significance when one reflects that several R6 Justices professed, under oath, deep respect for Roe during their Senate confirmation hearings, calling it “settled law.”

Of course, in another way, R6 did seek “precedent.” They traveled back in time far enough to find a period when women had no rights to control their own bodies.

The R6 state that they were unable to find a constitutional text to support Roe’s holding. How about the 9th amendment:

The enumeration in the Constitution, of certain rights, shall not be construed to deny or disparage others retained by the people.

This language is an expression of humility. After much agitation, the Framers accepted the idea of a “Bill of Rights,” but they understood that lists can deceive people into thinking that something not on the list does not exist or does not matter very much. The 9th amendment, as the Supreme Court later interpreted it, is a safety-valve, an opening to take account of future generations’ new understandings. Even without citing the 9th amendment, the early members of the Court saw that changing attitudes might usher in changing recognition of rights. In The Antelope, an 1825 case involving a ship carrying slaves, Chief Justice Marshall considered whether slavery should be held unlawful, as violating international law. He held “No,” because there was not a solid international consensus on the issue. He was misguided, because the worldwide abolition movement was stronger and broader than he acknowledged. However, the basic interpretive principle was valid: a worldwide consensus about rights can crystallize around a new formulation. Such a consensus around the woman’s right to choose has broadened and strengthened in the years since Roe was decided.

Taking Madison’s insight, and the Framers’ experience into account, the decision to overrule Roe is a mixture of arrogance, illiteracy, and lack of historical sense.

R6 did read the 2nd amendment, but apparently not all the words:

A well regulated Militia, being necessary to the security of a free State, the right of the people to keep and bear Arms, shall not be infringed.

As the dissenting Justices pointed out, this language refers to the specific historical circumstance of white settlers occupying more and more of what had been Native American land. It deals with “militia,” an organized and disciplined force, with muskets. What strikes me is the contrast between the R6 2nd amendment interpretation and others of its constitutional pieties.  Overruling Roe, R6 write that the abortion question will now be returned to the States, whose individual and collective wisdom is entitled to respect in our federal system.

R6 tell us that the constitutional text is absolute. It is not, of course; we can read. But consider the 1st amendment, which does speak in absolute terms about speech, press, and assembly:

Congress shall make no law . . . abridging the freedom of speech, or of the press; or the right of the people peaceably to assemble, and to petition the Government for a redress of grievances.

In Cox v. Louisiana, decided in 1965, the Court held that peaceful civil rights protesters with placards could be prosecuted for obstructing sidewalks and getting too close to public buildings. Their textually absolute first amendment rights could be subjected to limits as to time, place, and manner, so long as the limits were content-neutral. I have heard that the pen is mightier than the sword (and perhaps the gun), but the idea that placard-carriers can be regulated more stringently than gun-toters seems inconsistent at best. Imagine how any of the R6 would react if a group of gun-carrying protesters walked up and down the street in front of their houses. We know the answer to that one: as soon as the Alito opinion was leaked, the Justices scurried over to Congress to get more “security” for themselves and their residences.

United States v. Husayn, AKA Zubadaya: Mr. Zubadaya was unlawfully imprisoned and tortured as part of the “war on terror.” The evidence of torture was a matter of public knowledge. The Court held that his lawsuit could not go forward because it would reveal “state secrets,” that is, the so-called secrets that had already been publicly revealed. The Court’s majority of 8 Justices held that the government’s hiding behind secrecy could not even be judicially examined even in a cursory way. The “state secrets” privilege is not like the lawyer-client privilege, which protects individual autonomy and privacy. State secrets are information that government hides from the governed. John Adams wrote “And liberty can not be preserved without a general knowledge. But besides this they have a right, an undisputable, unalienable, indefeasible divine right to the most dreaded and most envied kind of knowledge, I mean of the characters and conduct of their rulers.”

The abdication of judicial responsibility in the face of executive power betrays the most fundamental constitutional principles. The historical and textual basis for this statement may be found in the materials cited in the Source Note.

Other Abandonments of Duty

In Patel v. Garland, the Court held that a man concededly victimized by a wrongful decision on his immigration status had no right to judicial review and correction of the error.

In Shinn v. Martinez Ramirez, the Court majority restricted the right of people sentenced to death to show that their trial counsel had been constitutionally ineffective. Anyone who pays attention to the news knows that hundreds of people have been spared from the death penalty and from unlawful incarceration by the work of Innocence Projects. Yes, unjust convictions and sentences are caused by police and prosecutorial misconduct. But one significant reason for such injustices is that defense counsel did not provide aggressive, diligent adequate representation. That kind of error often does not come to light until new counsel shows up and investigates the case. The Justices know all of this. Their curtailment of judicial review is not the result of ignorance, but of a callous disregard for human life and liberty. And the R6, to repeat, have chastened Roe’s supporters for failing to value “fetal life.”

How did we get here? What next? In the broader political landscape, the danger of fascism becomes clearer. For two decades, as the Monthly Review material cited below discusses, the organs of state power have resisted and undermined the institutional restraints that are a hallmark of bourgeois democratic ideology. For human rights lawyers, the task remains to demand adherence to guaranties of rights and to expose the failures to recognize and enforce them. As I have argued at some length in the works cited below, we lawyers ought never to have promised that the institutions of state power would fulfill promises. Every significant progressive change of the past half century and more has been driven by popular action and agitation. The Supreme Court, in a better time, decreed an end to racial segregation in schools, but real progress towards redeeming that promise did not come until people took to the streets.

Our job, now as before, is to understand the world as a step towards changing it.