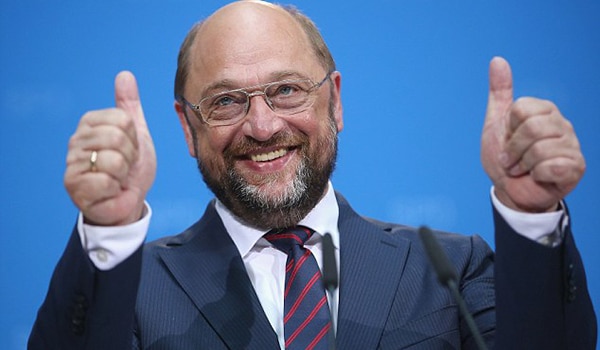 A personal note to readers:  Please excuse the long absence of Berlin Bulletins. The reason: I am working very hard to complete a book, this time again in English, summing up my experiences, reflections and conclusions based on living 24 years in the USA, 38 years in the GDR and 25 years in united Germany. I am almost finished, have as yet no (courageous) publisher, but will inform readers if it comes to pass. Anyone now interested can get my autobiography, “Crossing the River: A Memoir of the American Left, the Cold War, and Life in East Germany” – University of Massachusetts Press.

To follow German politics these days you have to like arithmetic. At first only up to six, for that many parties are now vying to get good grades, lots of votes, and more power in the September elections to the Bundestag, which will lead to a government ruling until 2021.

Leading a current coalition is the strongest party, the Christian Democratic Union (CDU), combined, usually peaceably, with its Bavarian offshoot the Christian Social Union (CSU). They have been having some worries lately. The leading figure, Angela Merkel, often described sort of affectionately as “Mutti” (Mutti means Mommy and the “u” is pronounced as in “put” not as in “mutt”),  is no longer the one and only choice of a big majority. Her controversial “welcome” words to all refugees lost her right-wing voters, her backtracking on it stopped this tide only partly, and a note of tiredness is sometimes visible behind her friendly, vigorous, plain-talking nature, which has covered many a sin at home and abroad. She has been moving down, up, down and up again in the popularity ladder.

With proportional representation it is the vote on a party basis which determines the route ahead. The current junior coalition party, the Social Democrats (SPD), has had a tightrope job; being in the government but also sounding critical and independent enough to win votes for itself and away from its partner. It was teetering alarmingly; even its one coup, winning overwhelming support for its man as new  president, Frank-Walter Steinmeier, was a mixed blessing, for the president has little to say politically except at celebrations and to foreign kings and presidents, and the removal of their most popular leader from all election endeavors left them with only the increasingly unpopular party chairman, Sigmar Gabriel, to wave their banner.

And this banner was sinking lower and lower. The faces of SPD leaders looked as glum as any child having trouble moving from adding and subtracting to percentage. By early 2017 the polls showed a measly 20% heading downward, while Merkel’s position in the front row, or that of her combined two parties, was way ahead in the mid-30 range. What hopes for September could survive that gap?

Then, in late January, it happened! German politics did a headstand! Martin Schulz, 61, for five years president of the European Parliament, left that job, entered German politics, replaced Sigmar Gabriel, who obligingly switched to the job of Foreign Minister, and was elected both SPD president and its main candidate for September. Every vote within his party gave him a rare, amazing result – unanimous 100 % approval. This was followed by a wave of popularity in all the land, with several thousand joining the party within a week. And the SPD poll figures moved higher and higher, soaring from the poor 20% on January 11th to 26% by February 1st and 31% a week later. A little numbers dance followed; in one poll the CDU-CSU was ahead by a point or so, in the next one the SPD.

There were several reasons for the euphoria. Schulz was known to TV viewers thanks to his position in the European parliament, but in German politics his face was new and unblemished. And his face, with bald head and clipped beard, was always a jolly one (or almost always), always exuding confidence that he would replace Merkel as next Chancellor. But more important were his promises. He surprisingly admitted the mistakes of the SPD-Green coalition before 2009, which had been great for the wealthy and super-wealthy but tough for pensioners, working people and especially those who lost their jobs. He promised to reverse such laws and improve the lot of precarious workers and the jobless. Such unprecedented honesty and a promise of better breaks are what won him the amazing gains, which cut into the numbers for the other parties, less those of the CDU-CSU, but rather of the Greens, the LINKE (Left) and the racist, ultra-reactionary Alternative for Germany (AfD).

Now arithmetic was again useful, and juggling, because even 32-33% is not enough to form a government; 50% of the seats are required. Who then would go with whom – and who couldn’t?

The AfD is still branded taboo and not in the coalition race, although the media have given it far too much time and some on the CDU-right have been sniffing around like a hound dog hunting a mate. But somehow Schulz has won back many voters who voted AfD to protest establishment politics  leaving them behind economically and threatening with worse to come. Schulz offered them new hope while the AfD, torn by inner quarrels, has dropped back to 8-9%. That’s one good thing anyway!

As for the Greens, so long as their one-time favorite partner, the SPD, dropped so low in the polls they chose conservative leaders and turned their eyes to the right. The party, totally unlike USA-Greens, was once youthfully rebellious, especially on climate issues, opposing atomic energy and women’s rights. Its interest in working people’s rights, never too strong, waned further as its members, often well-educated intellectuals,  got older and more successful. They were showing interest in cuddling up to Angela Merkel and her right-wing crowd, perhaps reaching the 50% mark with the help of the newly-revived right-wing Free Democrats. Then suddenly, with the rise of Schulz,  they saw the chance of a so-called red-red-green coalition with the SPD and the LINKE (which both use red as party color) and started to sound more leftish again.

The LINKE, which lost protest voters to the AfD and now some to the Schulz bandwagon, dropped from its 12 % rating of 2009 to a low of 7-8%. But the rise of Schulz suddenly roused new hopes to get cabinet seats in just such a red-red-green coalition! Indeed, if it stays ahead of the Greens (one point) it would be in second place in the triple coalition, and that means getting the Vice-Chancellor title and maybe even the Foreign Minister post! It sounds very, very enticing.

But there are still Cassandras, cynics, dogmatists or whatever, who warn that Schulz, with all his promises, has somehow remained vague about the details, and they recall how often in the past the SPD sounded vigorously leftist in its campaigns – until it won government power, when most or all promised gains were diluted or drowned. And the SPD and Greens, greedy as they are to gain power again, would make demands of the LINKE requiring a retreat on its basic principles, like barring German military involvement outside its borders, barring weapons shipments to the Near East or any conflict areas, or guaranteeing pensions high enough to keep seniors from poverty. Compromises on such issues would make the LINKE meaningless as a party fighting the status quo and working towards a truly socialist future.

Then on March 26th, in elections in the small state of Saarland, the CDU came back strong, keeping its lead there, while the SPD stayed in an unexpected, sad second place, while the LINKE also disappointed in its strongest state in West Germany, and despite the popularity there of Oskar Lafontaine, dropping a point to less than 13%. Has the SPD euphoria ended? Will the pendulum swing again? Some say this changes the whole picture. Others say: Wait for the state elections in May in northern Schleswig-Holstein and especially North-Rhine-Westphalia, the state with the largest population, both now headed by Social Democrats. They may really provide an omen for September.

Meanwhile Wolfgang Schäuble, Merkel’s Finance Minister, is still trying to impose austerity on an all-suffering Greece while Ursula von der Leyen, Merkel’s Minister of Defense, at first frightened that President Trump might leave NATO in the lurch, is now rejoicing at his demands that every NATO member spend more on armaments, exactly her song from the start, now especially desirable and especially dangerous – frighteningly so – as tensions increase with more battalions sent to confront Russia at her borders from the Baltic Sea to the Black Sea, and with new dangers in Syria. It is scary!

But here, to close with, is a less momentous note from Berlin. The elevated tracks, in Berlin called the S-Bahn, pass so close to one of the wonderful museums on East Berlin’s Museum Island (the most famous is the Pergamon Museum) that passengers get quick glances into museum windows. On March 27 a few men took some time and not only looked but with the help of a long ladder, a sledgehammer and a wheelbarrow broke at around 3 AM and stole the one meter diameter, pure gold Elizabeth II coin contributed by the Canadian government and managed to get it out and drive away with it. Melted down the gold’s worth up to 3.7 million euros, near $4 million. They may well have had insider help. The only moral I can see: Be careful whom you trust, whether it be a museum watchman or a politician. And don’t leave any big gold coins near windows!